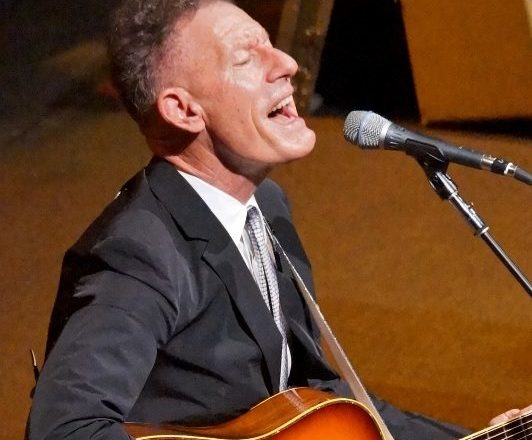 Lyle and His Large Band own the DCA again

Lyle Lovett and His Large Band put on their third great sold-out show at the Door Community Auditorium the night of July 19, but I sometimes felt my mind wandering and wondering why Mike Pence was playing lead guitar and Edgar Allen Poe was on pedal steel.

Of course it was not the Vice President of the United States nor the long-dead author on stage, but longtime Lovett guitarist Ray Herndon does resemble the Veep and pedal steel player Buck Reid could win a look-alike competition for the mustachioed master of the macabre.

And since we entered this territory, longtime Lovett singer Francine Reed reminded me of Ella Fitzgerald in her spectacles period, and not just because she scatted her way through several songs.

As has been true throughout his career – beginning with his 1986 self-titled debut album – Lovett’s music is impossible to pin down. There are elements of country, folk, gospel, rock, blues, western swing and jazz liberally sprinkled throughout, coupled with Lovett’s lyrics, always a wry take on the world.

The horns kicked things off, leading the band in a jazzy workout before Lovett took the stage to sing his quirky song about trousers, “Pants is Overrated.”

Even though his name is at the top, Lovett is a generous guy who allows every player his and her time in the spotlight. He gives ample time to those players who have projects outside the Large Band, with nods to recent releases by acoustic guitarist/mandolinist/vocalist Keith Sewell and fiddler Luke Bulla, each of whom performed a song from recent recordings they made on their own.

But even during his own songs or some of the great covers he does, Lovett encourages soloing.

As he watched each of the musicians in his band take their turn in showing what they’ve got with solos, the skin at the outside corners of his eyes crinkled as he smiled at the music being produced.

The only band member who did not have a recognizable solo was drummer Russ Kunkel, yet he perfectly accented his way through the night and stood out so much in the overall sound that he was showing his stuff all night without having to do a three-minute drum solo. Big drum sound. If you don’t know Kunkel, you should look him up. He has played with everyone on their now classic albums. A master!

A high point in the fantastic night of music for me was what is probably Lovett’s best-known song, “If I Had a Boat.” I realize that may seem too easy, but you had to be there. Lovett prefaced the song with a brief introduction relating to imagination, and how the song represented his dual boyhood dreams of wanting to be a cowboy and a sea captain. I fell in love with that song when I first heard it in 1987, on his second record, Pontiac.

One of the great things about seeing Lyle Lovett live is seeing how relaxed he is fronting his Large Band and singing for his supper, and how funny he is as he slips short stories in between songs, which often are also funny short stories.

He talked briefly about the beautiful intimacy of the DCA and what a pleasure it was to perform there, and he seemed to delight in saying they were playing “Fish Creek.”

With the energy generated in the packed auditorium for the incredible music being made, and the sincere thoughts Lovett expressed about performing here, I’d be willing to place a bet that we haven’t heard the last of Lyle Lovett and His Large Band in these parts.