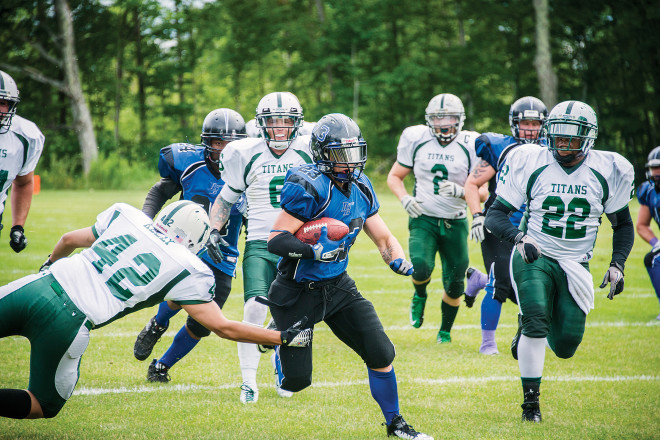 The scenario could not, on face value, be more improbable:  starting a semi-pro football team on a rather remote peninsula with a year-round population of less than 28,000 individuals. But that is exactly what three friends, with years of experience playing semi-pro football, did last year. And not only did they start a team from scratch, they finished with a winning record and qualified for their league’s playoffs.

The team is the Door County Destroyers and the three friends (who are both owners and players) are Shane Hills who serves as president and plays defensive tackle, Ryan Zuehlke who serves as chief financial officer and plays center, and Chris LeCloux who oversees personnel and plays linebacker. The three had played together at one time or another in recent years, particularly with the Green Bay Gladiators semi-pro team.

“We spent about a year talking about forming a team,” says LeCloux. “We talked about the obvious:  like whether we could actually pull it off and then had talks with the Wisconsin State Football League (the league the Destroyers play in) and we suddenly realized that we had a legitimate chance at starting a team.” 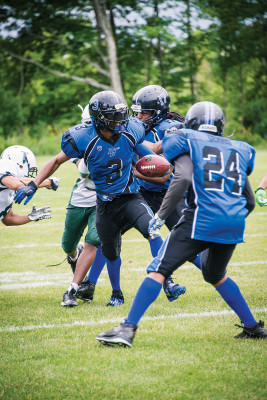 From the outset the intent was to base the new team in Door County. Both Zuehlke and LeCloux have deep ties to the county – though LeCloux now lives in Appleton – and that led to the next step in getting the team going.

“The hardest part for any team is finding a suitable field,” LeCloux said. “We looked at options in Southern Door and Sturgeon Bay, but then someone told us we should take a look at the field at the Baileys Harbor Recreational Park. So we drove up to take a look and couldn’t believe what we were seeing. The field was spectacular.”

With the blessing of the Baileys Harbor Town Board and the Recreational Park Committee, the “hardest part” was resolved. As both Zuehlke and LeCloux said in separate interviews, “We have the nicest field in the league. Without question.”

The combined years of playing competitive football made recruiting players a relatively easy task. “We picked up players we had played with on the Gladiators and players from teams we had played against and respected,” LeCloux explained. “And we ended up with about an equal mix of veteran players and new players. So as the season progressed and the new players learned from the veterans and gained experience, the team really began to come together.”

The next element to fielding the team was sponsors and the Door County community was quick to support their fledgling football team. “Whether it was through advertising or sponsorships, the community businesses rallied behind us and gave us support beyond our expectations,” LeCloux said.

“One of our sponsors is Flanigan Distributing,” Zuehlke added, “and when several of our players were selected as first and second team All-Stars at the end of the season, Flanigan stepped up and paid for their All-Star jerseys. Most players on other teams had to pay for their own jerseys.

“Between the field we play on, the success we had in our first year, and the level of community support we receive – players want to come and play for us. We can’t express our appreciation of our sponsors and advertisers enough,” he said. 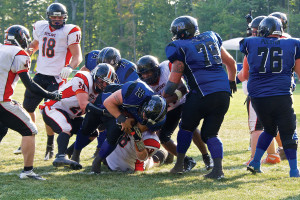 This left only one remaining question: would fans come out to see the Destroyers play. “We had between 300 to 500 fans at each of our home games – except for a game where it rained,” LeCloux said with a laugh. “We charge just $5 per game and 12 and under are free, so I think the community found out that our games are a great entertainment value.”

Last year’s team finished with seven wins and five losses in the Wisconsin State Football League and this year’s team expects to improve on that record and go further in the playoffs. With a variety of new players and a new head coach, both LeCloux and Zuehlke are excited for the season to begin.

“Our new head coach [Jaime Flores] was the defensive coordinator for the Manitowoc County Mariners the past several seasons,” LeCloux said, “but he is also knowledgeable on the offensive side. Right now [late May at the time of this interview] I would say our offense is ahead of our defense in terms of understanding the system Jaime wants to use.”

“We have some exciting new faces on the team this year,” Zuehlke added. “In particular our new quarterback, Alex Whitney. He comes to us from the Outagamie Outlaws and I think every team in our league tried to get him. He was, statistically, the highest ranked quarterback last year and we were lucky enough to get him on our side.”

Andre Wilson, the exciting wide receiver and cornerback, who Zuehlke calls “the best player I have ever played with at any level,” is back for a second season with the Destroyers along with other standouts, including Max Seroogy, another wide receiver; Bryan Beachler, at defensive end/linebacker; and Trevor Thompson at cornerback.

“It would be tough to field a team of just Door County players,” LeCloux explained, “but we have about a dozen players who live in the county and another four to five who have ties to the county but now live elsewhere in the state.”

In fact, the players on the Destroyers come from areas throughout Wisconsin and, in some cases, beyond.

“One of the things our advertisers and sponsors appreciated is that our games bring in a new crowd,” Zuehlke says. “Family and friends of players from other parts of the state 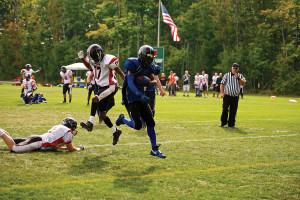 travel to Baileys Harbor to see our games, then go to the restaurants and shops after, and that benefits both our team and the businesses.”

Even with all the success, this question remains – why do grown men continue to play a violent, though often elegant, game? None of the players are paid for all the practices and games, in fact, the players are required to pay a “player’s fee” in order to participate. They must supply their own equipment including all the pads, shoes, etc. The travel to away games can mean hours on a bus. And only a few players hope to use their play on the field as a stepping stone to a higher level of competition. So what is their motivation?

“All of us – every player on every team – just love to play the game,” LeCloux explained. “And none of us are quite ready to give up playing the game we love.”