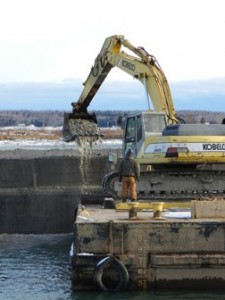 Roen Salvage crews worked around the clock the week after New Year’s to finish getting the Potato Dock ready for the Arni J. Richter. Photo by Dick Purinton.

Visitors, residents, and cargo traveling to Washington Island will be taking a different approach once the ice sets in on Lake Michigan. After weeks of dredging and retrofitting, the island’s so-called Potato Dock has been set up as the Washington Island Ferry Line’s winter port of call.

Washington Island Ferry Line President Hoyt Purinton said the recent record drop in the lake level has made it impossible to run the line’s icebreaking ferry, the Arni J. Richter, safely into Detroit Harbor, necessitating the dredging project at the Potato Dock.

“The navigable level [for the Richter] is 11 feet,” said Purinton. “And there’re other things you have to take into consideration like dips and swells caused by the wind.”

Detroit Harbor is still usable for the ferry line’s smaller, non-icebreaking vessels because they require less water to navigate in. Purinton said further dredging work there, with the intent of making it usable by larger vessels, would essentially be a waste of time.

“For all intents and purposes we’re within a foot or so of the channel depth there,” said Purinton. “There’s a limit physically and economically to what we can tackle by dredging.”

The dredging work at the Potato Dock, which is surrounded by much deeper water than Detroit Harbor, was slow-go for much of the project because of inclement weather, but around-the-clock work by Roen Salvage and Tom’s Excavating during the week after New Year’s brought the project mostly to completion on Jan. 7.

Now that the work is done, the Arni J. Richter has a safe harbor to load and unload from. Purinton’s also looking to get some minor dredging done at Northport and Detroit Harbor before the inclement weather truly sets in, bringing the ferry line’s total expenses for the project to $750,000.

Thinking past this year’s dredging, Purinton said he’s been working with the Town of Washington to make a case for state or federal intervention in the Detroit Harbor channel.

“We applied last year, unsuccessfully, for harbor assistance, and the DOT requested more information,” said Purinton. “So we’re studying it. Hopefully we’ll have something soon to market to the state or federal government.”

Purinton’s hopeful the water level will come up again in the spring, but said he’s thought about what the ferry line would do if levels continue to drop.