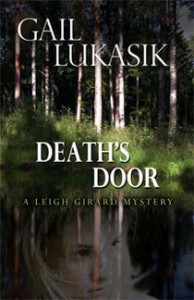 Gail Lukasik returns to Novel Ideas Bookstore in Baileys Harbor on Tuesday, July 28 at 1 pm  to sign and read from her new book Death’s Door.

Death’s Door is the second book in the mystery series set in Door County featuring reporter Leigh Girard. Destroying Angels, her first book, is available in paperback and is set in the town of Egg Harbor. Kirkus Reviews described Destroying Angels, as “a riveting debut thriller.”

In Death’s Door a killer is targeting young blond women, leaving their strangled bodies along the desolate Mink River in Door County. The killer ritualistically arranges the bodies to mimic sleep, except for the long blond hair, brushed over their faces, and his deadly calling card – a purple band wound around the victim’s finger – a macabre symbol of love. Reporter Leigh Girard’s investigation into the murders lures her into a bizarre correspondence with the killer. His letters taunt Leigh with cryptic literary clues that hint at his identity. Leigh races against time to crack the killer’s code, before he kills again.

Gail Lukasik was born in Cleveland, Ohio, and was a dancer with the Cleveland Civic Ballet Company. She has worked as a choreographer and a freelance writer. She also has been published in over 60 literary journals, including The Georgia Review, Carolina Quarterly, and Mississippi Valley Review. In 2002 she was awarded an Illinois Arts Council award for her work. She received her M.A. and Ph.D. from the University of Illinois at Chicago, where she taught writing and literature.