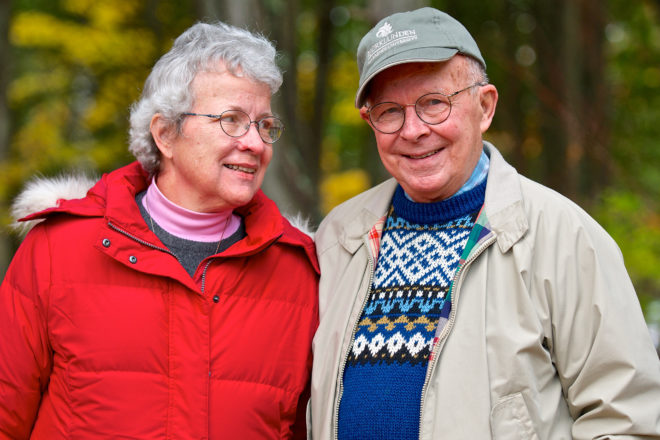 Pulse and Door County Living contributors Roy and Charlotte Lukes are half of the quartet of honorees being inducted into the Wisconsin Conservation Hall of Fame at a public ceremony in Stevens Point on April 14.

Roy, who died in 2016, and Charlotte are being recognized for “their lifetimes protecting the natural beauty of the peninsula and sharing its magic through their teachings, writings, and personal charm…. They educated and inspired citizens of Door County and the State through their many research efforts, lectures and nature walks, books and newspaper columns. They were also instrumental in protecting many of the county’s most scenic gems and ecologically valuable habitats. Roy and Charlotte saw their scientific research on the flora and fauna of Door County as a cornerstone to their work in conservation related education, policy and public leadership.”

Also being inducted on that day are George Meyer, who as a highly respected and influential Secretary of the Wisconsin Department of Natural Resources was instrumental in creating and advancing major conservation and environmental policies affecting all of the state’s natural resources, and serving since his 2002 retirement from the DNR as the first executive director of the Wisconsin Wildlife Federation; and Arlie (Bill) Schorger (1884-1972), who is best known in the conservation world as a nature historian, which included his 1955 award-winning book The Passenger Pigeon:  Its Natural History and Extinction. Schorger was also a personal friend of Aldo Leopold, playing a pivotal role in launching Leopold’s career and conservation legacy.

Established in 1985 to advance the conservation legacy of Wisconsin, Wisconsin Conservation Hall of Fame recognizes 94 leaders who have contributed significantly to the advancement of conservation in Wisconsin and the nation.

The 2018 induction ceremony will be held at the Sentry Theater in Stevens Point, beginning with a 9 am reception, followed by the induction at 10 am. Those events are free. A 12:30 pm luncheon at Sentry World Center costs $25.

Reservations can be made by purchasing tickets online at eventbrite.com or by calling 715.346.4992.