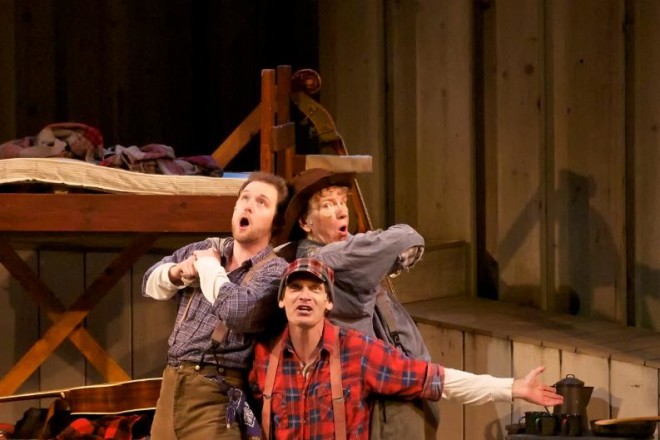 Northern Sky Theater embarks on its sixth season in partnership with the Door Community Auditorium with the fall debut of Lumberjacks in Love.

Lumberjacks in Love premiered in 1996 and is one of Northern Sky’s all-time box office hits. Set in the turn-of-the-century Haywire Lumber Camp, Lumberjacks celebrates a world where bath time is once a month and the blast of the dinner bell brings the boys running. The story follows the exploits of four burly lumberjacks who live in a state of manly bliss until an encounter with a plucky mail order bride interrupts life as they know it.

“Lumberjacks in Love is one of the earliest and most successful collaborations between the classic writing team of Fred Alley and James Kaplan,” stated Artistic Director Jeffrey Herbst. “While it has played numerous times on our summer stage, we’ve never had the opportunity to offer Lumberjacks as a fall show. Now, our fans will get the chance to enjoy this fan-favorite and the spectacular fall colors in one fell swoop.”

Returning to the reprise their past roles are Chase Stoeger as Moonlight, Doug Mancheski as Dirty Bob, Jeffrey Herbst as Slim and Molly Rhode as Rosemary. String musician, Craig McClelland, who has accompanied numerous Northern Sky performances will spring from the pit to make his onstage debut as Muskrat and veteran performer, Eva Nimmer will make her mark as the Kid.