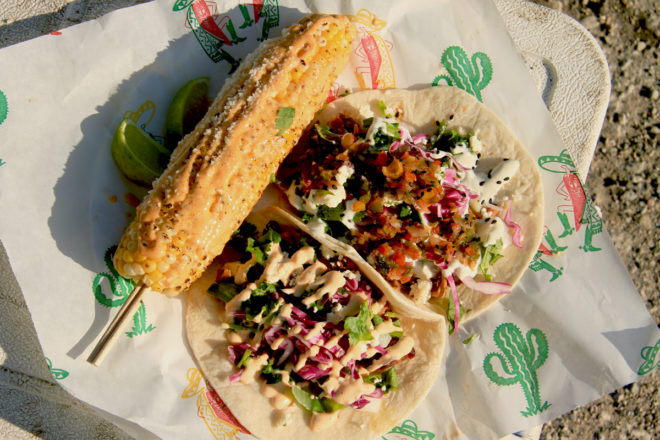 The Taco Boss sets the rules for serving award-winning tacos

Cash Murphy, also known as the Taco Boss, has brought award-winning tacos to downtown Sturgeon Bay through his food truck, Lumberjack’s Taco Shack. Originally from Chandler, Arizona, Murphy has been visiting Sturgeon Bay for the past 11 summers, first as a songwriter and Steel Bridge Songfest participant, and now as a purveyor of “new Sonoran-style tacos.”

Murphy began his foray into cooking when he realized that the food he enjoyed at backyard barbecues tasted better than what he was finding at most restaurants.

“Where I’m from, there are carnicerias [Mexican butcher shops] all over the place,” he said. “In my neighborhood, there’s a meat market where you get carne asada and marinate it, go in your backyard and grill it, put it on a tortilla with cabbage and avocado, and it’s better than what you can find in restaurants.”

That inspired him to begin experimenting with his own take on tacos and to begin building out his own taco truck. Eventually, after three years of prep, his taco truck was complete and Brad Hunsader invited him to host a Thursday Taco Night at Brick Lot. Now, Hunsader has left Brick Lot to join Murphy as his general manager.

Some flavors have changed over time, but Murphy’s taco philosophy has only become more steadfast.

“My whole style is new Sonoran, taking north-border classics [and] north Mexico style and reinventing them with modern techniques, but still keeping them traditional,” Murphy said.

His rules for serving up award-winning tacos? Here are seven:

Rule No. 1: Lettuce is for posers.

“Our motto for the truck is ‘Lettuce is for posers’ because the minute you put lettuce on a taco, it wilts,” Murphy said. “Cabbage, especially red cabbage, you eat with your eyes, so the first thing you see is the color, and then it has a more radishy flavor to it and a better texture.”

According to Murphy, salsa is a topping meant for burritos, which diners expect to be more bulky. Tacos, in contrast, need to be more efficient with flavor and size, making a sauce more appropriate. Each taco on the menu has a specific, house-made sauce to match its ingredients, but those who like more spice may choose from 46 taco sauces to customize their meal. Ask Hunsader or Murphy for their recommendations.

“These things are crazy,” Murphy said. “The green onions are three feet tall! One bunch is the size of four bunches from the store. And the corn up here is killer.” The truck is sourcing all of its meat from Door County Custom Meats.

Rule No. 5: Even the toughest meat can be tender.

“We marinate everything in house with all our spice rubs, then high-temp charbroil everything,” Murphy said. “Then the meat goes into a custom beer-and-citrus bath to slow cook, which takes a really tough cut and turns it super tender.”

The menu is purposely set to sell out daily, ensuring that only the freshest ingredients go into the tacos.

“There’s only so much that we will make because I will never reheat and reuse,” Murphy said. “I can taste the difference if something is two or three days old, so I won’t do that.”

Rule No. 7: No formal training is needed.

Despite being self-taught, Murphy has racked up 16 cooking awards. Through his YouTube cooking channel, Cooking with Cash, he instructs viewers how to cook deliciously with minimal experience and on a budget. He demonstrates that it doesn’t take formal training to cook great food at home.

Where to find Lumberjack’s Taco Shack

The taco truck will be serving tacos on the northeast corner of Michigan Street and 2nd Avenue (across from the Shell gas station) in Sturgeon Bay all summer through Sept. 10. Hours can change, but are currently Monday through Thursday 11am – 2pm and 5pm – 9pm. Friday and Saturday 11am – 11pm and Sunday 11am – 9pm.

After the season the truck will head to the Arizona Taco Festival. “It’s insane. Our line there gets to be two and a half hours long,” Murphy said. “We also take a lowrider hot dog stand called Hots & Hydros, which serves enchilada-style hot dogs.”

The two-day fest has nine competition categories, and Murphy has earned awards in several categories during the past three years, including the People’s Choice Award in 2018 – akin to a best-in-show honor – for the Pineapple Pete taco.

If you go, don’t miss Murphy’s version of elote: a modernized style of the classic Mexican grilled street corn. It’s a popular menu item that’s a perfect addition to a plate of tacos. The corn comes freshly grilled, drizzled in a secret sauce and sprinkled with cotija. Just don’t forget the napkins.