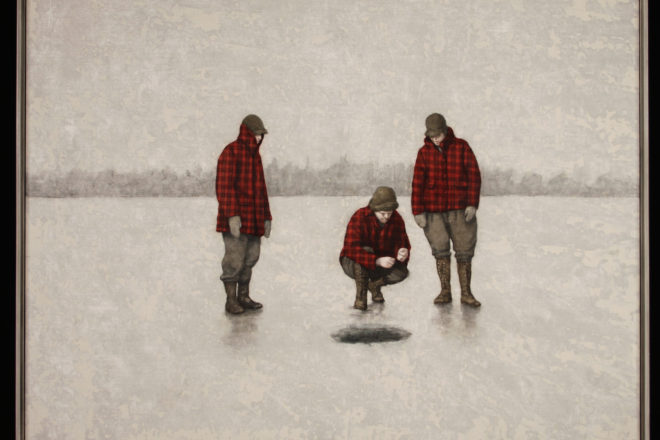 Sweet and a bit sentimental without being sappy, Pamela Murphy’s paintings are, mostly, a blast from the past – sometimes based on real people, sometimes entirely imagined.

She starts with photos, usually vintage, and uses them to create paintings with many layers of paint that she scrapes or sands between applications. She has canvases tacked to the walls of her studio, and she moves around, working on multiple paintings during a given session to allow time for the paint to dry.

Murphy said her technique is pretty consistent, but her work has changed in ways that patrons notice but that may elude her.

“I sometimes feel like it hasn’t changed all that much, but people tell me that this work is the best work ever, and it’s so, so different from last year,” Murphy said. “Maybe I’m too close and don’t see that so much, but I think my work is consistent.”

One change she does notice is her subject matter. It used to be mostly young girls, but now she finds herself painting buildings and animals, often on commission.

Murphy is frequently commissioned to take a childhood photograph of someone’s spouse or parent and create a painting as a surprise gift.

Some clients are content to leave the entire painting design up to her; others suggest a particular color or background design, or request bunnies in the background, or want childhood objects included, such as a favorite stuffed teddy bear.

Murphy prepares her canvases with gesso, then two or three layers of oil paint in different colors. After the paint dries, she soaks the canvases in water for a week or two, then lays them on the concrete floor of her studio and scrapes the paint off.

“This year I finally got smart and bought knee pads,” she said.

Sometimes she also carefully sands the canvases, usually with a palm-sized rotary sander. The scraped canvases go into a storage area until she’s ready to paint. Then she sorts through her options for a canvas that’s the right size and color.

Murphy sketches the image in charcoal to the established size and position, then does a more refined drawing, followed by a value painting in white, before adding color in translucent glazes.

“It’s kind of the old masters’ technique because they would do a value painting, and then the color goes on afterward as transparent glazes – lots of layers of glazes,” Murphy said.

“That’s why, when you look at those, the color is luminous – because the light is going down to the underpainting and then reflecting. You can get really beautiful colors because if you want a green, you don’t just squeeze green out of the tube. You do layers of different blues, different yellows, and it all builds up to be green.”

Murphy works mostly with a palette knife and rags to wipe glazes on and off, so she needs the canvas to be on a solid wall. This is incremental work, applying thin layers of paint and giving them time to dry.

“I work on a lot of paintings at one time, and I wheel my cart around,” she said, referring to the wheeled serving cart that holds her paints and equipment. She doesn’t stretch the paintings until she’s finished.

For detailed work, such as the tattoo on a juggler or gold-leaf applications, Murphy uses brushes.

“Sometimes I get a painting back from a gallery, and I will unstretch it and sand off the old image. The more often that happens, the more interesting,” she said.

Murphy lives on a 10-acre farm that she bought in 1995. With a lot of work, the barn became a studio with a concrete floor and heat so that she can work comfortably throughout the winter.

She describes her work life as two full-time jobs: one as a painter and another as a farmer. She raises chickens, bees and Nigerian dwarf goats that she milks; has large gardens; and said she produces about 90 percent of what she eats.

Murphy feels very fortunate that she’s making images that she wants to make, and it’s gratifying when people want to buy a painting, have it in their home and live with it.

“Painting is something that I love to do,” she said. “I love to have an image in my head and have the technical ability to produce it. And it’s rewarding that people like the paintings and that they relate and feel something. Art should have some beauty. It should be pleasing to look at.”

Murphy plans to keep painting – and farming – as long as she’s physically able.

“My technique is pretty physical, you know, scraping and everything,” she said. “But I like the look of the canvas with the paint scraped – it works well with my imagery of old photographs. I don’t know, maybe I’ll have to change to a different medium or work at a smaller scale, but I’m pretty sure I’ll paint for the rest of my life. I may have to change how I do it, but I want to keep making art and farming as long as I can.”

It’s clear – while watching Murphy call her goats or chat with her chickens – that she loves both of her occupations.

“I interact with all the animals every day, several times a day, feeding, watering. I feel very fortunate to live the kind of life that I want to live, to be able to paint, make a living doing it, and being able to produce my own food. The fresh-quality food that you can grow yourself is so much different and so much better than what you find in the grocery store.”

Pamela Murphy is represented by Fine Line Designs in Ephraim; by Gallery Mar in Park City, Utah; and by galleries in Boston and several other cities around the country.