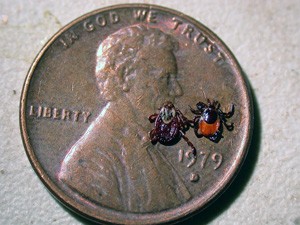 A wood tick (left) and deer tick. Photo by the University of Wisconsin Etymology Dept.

Lyme Disease is on the rise in Door County, according to data from the Door County Department of Health Services (DHS). Cases have more than doubled during the past 10 years.

Lindsey Donohue, a supervising nurse at Door County Medical Center, said the hospital has been getting more calls for tick bites than ever before. Infection Preventionist Leanne Pinkert confirmed three cases of Lyme disease at the hospital since May. Two of the three were lab tested, and one was called in due to a rash.

“This is tough because if it is not lab tested, I might not always find out,” she said.

In 2017, the DHS reported 27 total counts of Lyme disease in Door County, according to Chelsea Smies, a registered sanitarian and health educator with DHS. Ten years ago, there were only four reported cases in the county, according to a DHS Public Health Data Tracker.

“Door County is not special when it comes to ticks and Lyme,” Smies said. “The entire state is at risk.”

In 2018, DHS reported 3,105 cases in Wisconsin. Although there are hundreds of blood-sucking tick species, three transmit human disease, and all three are found in Wisconsin: the black-legged tick (or deer tick), American dog tick (or wood tick) and lone-star tick (a recent immigrant to Wisconsin).

Ticks are most famous for spreading Lyme disease, but they also carry Rocky Mountain spotted fever, anaplasmosis, ehrlichiosis and the Powassan virus, among other diseases.

Smies said that anyone can contract Lyme disease, regardless of age, race or gender. The Centers for Disease Control receives about 30,000 reports of Lyme disease every year, but 10 times that number may go unreported.

The UW-Madison Department of Entomology, paired with Columbia University, released The Tick App in 2018, which allows people to track their outdoor activities and encounters with black-legged and deer ticks. Through the app, researchers found encounters with ticks in places they didn’t expect, such as backyards. This means ticks are moving into cities and suburbs.

The 2019 version of the app includes information about tick activity, prevention tips and how to remove them.

If a tick does insert its barbed feeding tube into your skin, it’s important to know how to remove it. Avoid folk remedies such as touching the tick with a hot match, painting the tick with fingernail polish, or applying rubbing alcohol or petroleum jelly to make it detach from the skin. These methods are not effective and may cause the tick to regurgitate into the bite wound.

You do want to remove the tick as quickly as possible, however. The Lyme disease risk is reduced if the tick is removed within 36 hours, but not necessarily the risks from other pathogens transmitted by these ticks.

The best technique for removing ticks is to use a fine-tipped tweezers to pull the bug straight out of your skin. Grasp the tick as close to your skin as possible, and never crush it with your fingers. Pull upward, and don’t twist or jerk the tick. That can cause the mouthparts to break off and remain in the skin. If that occurs, remove them with the tweezers. If you are unable to remove the mouthparts, leave them alone and let the skin heal.

Ticks are prevalent through fall and can be active in temperatures as low as 32 degrees. The peak of the season occurs in June and July. Prime tick locations include wooded, brushy or grassy areas.

• Use repellent that contains 20 percent or more DEET, picaridin or IR3535 on exposed skin for protection that lasts several hours. Always follow label instructions. Parents should apply this product to their children, avoiding the hands, eyes and mouth.

• Use products that contain permethrin on clothing. Treat clothing and gear, including tents, with products containing 0.5 percent permethrin, which remains protective through several washings. Pre-treated clothing is also available and may be protective for longer.

• The Environmental Protection Agency has an online tool to help you select the repellent that’s best for you and your family (epa.gov/insect-repellents/find-insect-repellent-right-you).

Find and Remove Ticks from Your Body

• Bathe or shower as soon as possible after coming inside (preferably within two hours) to wash off and more easily find ticks that are crawling on you.

• Conduct a full-body tick check using a hand-held or full-length mirror to view all parts of your body after returning from tick-infested areas. Parents should check their children for ticks under the arms, in and around the ears, inside the belly button, behind the knees, between the legs, around the waist and especially in the hair.

• Carefully examine gear and pets because ticks can ride into the home on clothing, animals, coats and backpacks, and then attach to a person later.

• Tumble-dry clothes in a dryer on high heat for 10 minutes to kill ticks on dry clothing after you come indoors. If the clothes are damp, additional time may be needed. Hot water is recommended if the clothes require washing first because cold and medium-temperature water will not kill ticks. If the clothes cannot be washed in hot water, tumble them dry on low heat for 90 minutes or high heat for 60 minutes. The clothes should be warm and completely dry.

If a Tick Bites You

• Don’t squeeze, twist or squish it. Don’t burn it with a match or cover it with petroleum jelly, nail polish or rubbing alcohol.

• Use fine-point tweezers or a special tick-removing tool. Grasp the tick as close to your skin as possible. If you don’t have tweezers, protect your fingers with a tissue.

• Pull the tick straight out with steady, even pressure.

• Disinfect the bite area and wash your hands.

• Save the tick for testing (alive if possible) in a small bottle or plastic bag with a green leaf or damp piece of tissue.

• Label it with your name, the date, the site of bite and how long the tick was attached.

• Don’t panic. A tick must feed for at least 24 hours to transmit the Lyme disease bacterium.

Watch for Symptoms of Tick-borne Illnesses

• Fever and chills: With all tick-borne diseases, patients can experience fever at varying degrees and times of onset.

• Aches and pains: Tick-borne-disease symptoms include headache, fatigue and muscle aches. With Lyme disease, you may also experience joint pain. The severity and time of onset of these symptoms can depend on the disease and the patient’s tolerance level.

• Tick-borne diseases can result in mild symptoms that are treatable at home to severe infections requiring hospitalization. Although these diseases are easily treated with antibiotics, they can be difficult to diagnose. However, early recognition and treatment decreases the risk of serious complications. See a doctor immediately if you have been bitten by a tick and experience any of the symptoms described here.