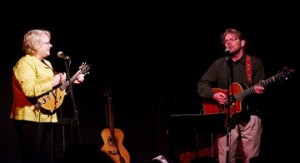 Five years ago, Door County musician Lloyd Michelson introduced fellow musicians Lynn Gudmundsen and David Hatch “musically and as a couple,” smiles Gudmundsen. The two were brought together to perform Christmas carols and have been playing together ever since.

“Sometimes when you sing with somebody, you naturally have the right blend,” explains Gudmundsen. “We have a really good blend.”

The two perform throughout the county, indoors and out, publically and privately, festivals and weddings.

“We play Beatles to Beethoven,” says Gudmundsen before listing just a few of the artists they cover: “Van Morrison, Neil Young, Jimmy Buffett, Jason Mraz, Frank Sinatra, Nancy Sinatra, and every now and then, Britany Spears.”

“I’m at the musical age where, if you play covers, you’ve done it all – a little bit of everything,” adds Gudmundsen, who has been playing music since she was nine years old.

“I learned playing classical and started playing folk and bluegrass music in the late ‘70s in Alaska,” recalls Gudmundsen, who has lived and toured throughout the United States during her lifetime. “I’ve been in Door County in the summers my entire life. I’ve only been full-time here about eight years. This is my home.”

Hatch is an Ephraim native who has also lived throughout the country at various points in his life: Washington, Utah, Rhode Island. He first realized his interest in music while attending First Baptist Church and singing “harmony with my mommy,” he smiles. He participated in high school band and choir, but made a living designing and crafting custom-made furniture.

Hatch continued to enjoy making music, participated in a few local open mics and six years ago began co-hosting Door Jams with Michelson. “Door Jam is basically a place for young kids and ourselves to get up and play in front of a live audience,” he explains.

Both Hatch and Gudmundsen have a passion for performing music for others. “It’s just a joy and a pleasure, it’s what we love,” says Hatch.

“Music is my life, it’s the highest highest of highs,” laughs Gudmundsen.

“It comes easily between the two of us,” adds Hatch.

The couple rotates three or four sets depending on where they perform and the audience. “We try to do what people want,” says Gudmundsen.

The couple also performs with Lloyd Michelson as the trio One Voice, touring assisted-living centers throughout the Midwest. “My grandmother died up at Scand [Scandia Village] when it was just one building,” explains Gudmundsen. “I used to play there all the time for her and continued playing. It started me on a lifelong path for playing for seniors. Lloyd joined me then we got David.”

“They can’t get out to hear it,” adds Hatch. “That keeps us playing covers, something sentimental.”

For more information about Gudmundsen and Hatch’s duo, visit davidandlynnmusic.com. Check out the Calendar of Events to catch the couple’s upcoming performances, which include weekly Saturday shows from now until the end of August at The Sister Bay Bowl’s Alley Bar from 5 – 7 pm.