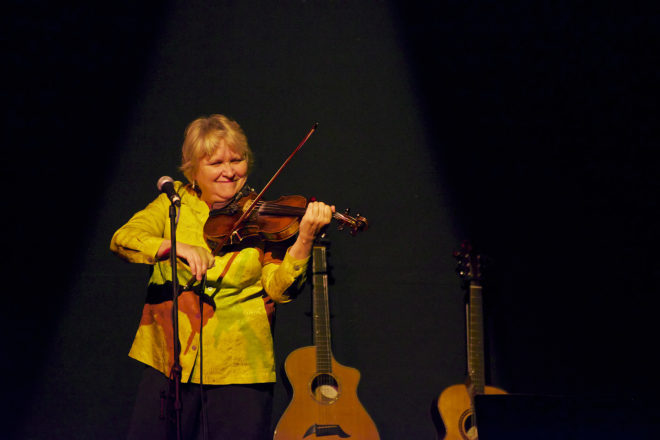 Lynn Gudmundsen puts her heart into her performances. Photos by Len Villano.

Door County fiddler Lynn Gudmundsen has been everywhere, and everywhere she went, fantastic musicians found her – from Vassar Clements in Alaska to Willie Nelson in Maui.

Gudmundsen grew up in Chicago and spent summers and holidays in Door County, where her mom owned a knitting and clothing shop. She started classical violin lessons at age nine, but by the time she got to college on a music scholarship, she realized she didn’t want to be a professional violinist. So, she trained to be a math teacher instead.

From Illinois, the newly minted teacher traveled to New Mexico, and there she chanced upon an ad seeking teachers for an Inuit village in Alaska. It was while living in Anchorage that Gudmundsen discovered a love for improvised fiddle and formed a band called Soapstone with which she learned to play by ear and gig. She also picked up the mandolin to better blend with the banjo and guitar.

“He said, ‘Why don’t you ride the slow train with me to Anchorage?,’ Gudmundsen said, “and there was a whole car empty, so we played the whole way back. He asked if I’d like to come to the show in Anchorage and open the show, play with him and tune his fiddle.”

They became friends, and Soapstone brought Clements back to perform in Alaska several times. Gudmundsen’s bond with the great fiddler strengthened such that he encouraged her to move to Nashville, telling her that it was “now or never.”

“He said, ‘Come to Nashville, and I’ll introduce you around,’” she said. “We went to The Station Inn, and I played with Norman Blake, and he got me in with Bill Anderson to audition for the Grand Ole Opry.”

Gudmundsen had been living in Music City for three years when the manager of Vince Gill – a multi-Grammy-Award-winning American country singer and songwriter – asked her to go on tour for 22 weeks. She had a young child by that stage of her life, so she declined the offer. In doing so, she realized there wasn’t much point sticking around Nashville if she couldn’t make the most of the opportunities that were starting to come her way.

“I thought, ‘Well, this is stupid,’ so I went back to Maui and got a teaching job and kept playing music,” Gudmundsen said. “Playing on Maui was great. I played all the time, and we got to open for all the big artists that came to perform.”

Gudmundsen had happily settled back into life on the island when a particularly big-name artist came through: country-music legend Willie Nelson.

Gudmundsen and another local musician, Teri Garrison, were among the small group of players at a casual, late-night jam with the long-haired legend. Nelson played musical matchmaker, suggesting Gudmundsen and Garrison join forces as a duo, and he offered them the spot as his opening act. They opened for Nelson in Maui and again, years later, at the Door Community Auditorium, joining him on stage for the closing performance of each show.

Since returning to Door County permanently 15 years ago, Gudmundsen has become a beloved fixture in the local music scene. She started playing with Julian Hagan as soon as she returned and, pre-pandemic, was playing five nights a week with a variety of locals, including Hagan, Jeanne Kuhns, George Sawyn and David Hatch, with whom she currently has a duo.

During the summer of 2020, Gudmundsen and Hatch played three nights a week outside the Chef’s Hat and Joe Jo’s Pizza in Ephraim – something that kept money coming in, but also helped them to maintain a sense of normalcy in the midst of the pandemic.

This year, Gudmundsen is enthusiastic about a relatively normal summer, filled with great music played with good friends.