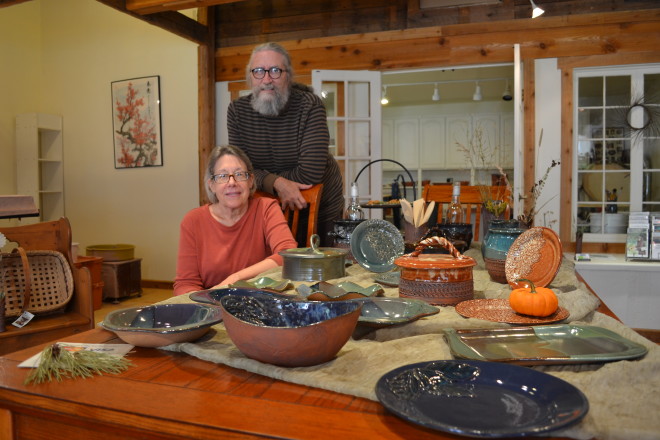 When Lynn LaLuzerne takes a seat before her wheel and the 25-pound bricks of clay sitting in the workspace of her new gallery and studio, she has one focus: to create functional pottery that is visually pleasing and “alluring to the tactile senses.”

Looking around the shelves lined with high-fired and lead-free vases, mugs, bowls, plates and bakeware, it is pretty obvious Lynn has a strong grasp on that goal and making a name for herself as one of the county’s newest gallery owners.

Functional pottery has always been the name of the game for the Milwaukee native, who holds a bachelor’s degree in ceramics from the University of Wisconsin-Milwaukee, though her original plan was to become a graphic artist. 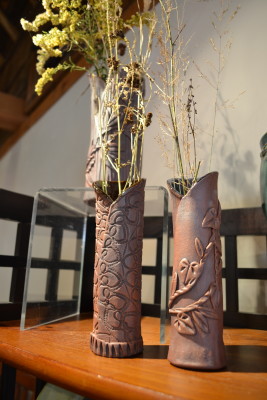 “In order to get a bachelor’s degree, you had to take jewelry, weaving, sculpture and ceramics,” she recalls. “Ceramics was the craft; at that time it wasn’t considered an art so we were in the basement. I took a dreaded ceramic course and I opened up a bag of clay, and I just loved the smell of it. I don’t know what to say. The rest is history.”

Lynn was six credits short of a master’s degree in the art form, a pursuit that she cut short when she realized she didn’t want to teach. Meeting her future husband, David, had a little bit to do with it as well.

“I knew it’d be a better deal marrying him,” she laughed.

The couple moved to Madison in 1976, married in 1977 and then Lynn took a break from pottery while raising the couple’s three children. But when a friend asked her to join in a weekly ceramics course at Madison Area Technical College, Lynn couldn’t turn the opportunity down.

Soon enough, she bought a kiln, got a wheel and started buying glazes. Her first studio was set up in the basement of the couple’s Madison home – a dark, dirty little space whose major benefit was being located next to the family’s laundry spot.

Her functional pottery started out as gifts for family and friends, and eventually she began selling in her pharmacist husband’s vitamin and herb shop, Green Earth. She also started setting up at vendor fairs and when the couple opened a third Green Earth location in Middleton in 1998, there was a small room in the back – just big enough for Lynn to pull her gear out of the “dank and dirty” basement and set up a studio.

“It was cleaner,” Lynn laughs. “And I had more space.”

“She started working a lot more,” David says. “… and by that time the kids had grown up and had moved out so we didn’t have kids around there. She had more time to spend on it.”

Lynn says she became more efficient in her craft and more serious about developing a style. Her herb-selling husband inspired the botanical elements in her pieces and she found ways to incorporate old things into new work. Her tool of choice is a golf tee and doilies are used to create texture in her pieces, which are characterized by use of earthy matte glazes, layers and texture.

Setting up her own gallery and studio was never much of a thought for Lynn. But one of their visits to the Door Peninsula changed her mind. 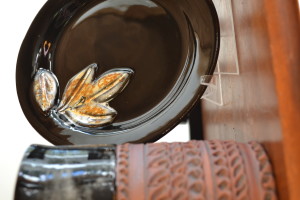 After selling their home and their last Green Earth store in 2008, the couple moved into a rental in Middleton where the landlord let Lynn set up a small studio in that area she had long been familiar with: the basement.

“That was our retirement,” Lynn says. “But I continued doing pottery.”

It was during a trip to Door County in the fall of 2014 when they first noticed the vacant Ellison Bay building (which has housed Will’s Grocery, Berch Tree and the Frykman Gallery) on Garrett Bay Road and, Lynn admits, “David saw more promise in it than I did.”

The price was right and in January 2015, the couple slowly made the transition to life in Door County. They began renovations on the gallery in April, moved in in May, and opened the gallery and studio in June.

“People have been wonderful,” Lynn says. “They are glad that we cleaned the place up. I’ve been working real hard ever since. It’s a nice problem to have.”