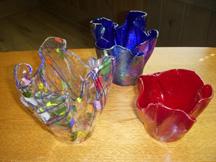 The Jacksonport Craft Cottage, now in its 25th year, is pleased to include glass artist Kimberly Lyon among their represented artists. Lyon’s artwork on display at the shop includes traditional stained glass pieces and slumped glass in a variety of colors and sizes.

Lyon first began exploring and working with glass in 1989, while employed as a research biochemist in New York. She had always admired many types of glass, including stained, torch-worked and blown, but had previously focused on science rather than art or craft. A change in work hours led Kimberly to the local craft store where she found some glass, tools and a book on stained glass techniques to fill a few free hours and make some stained glass pieces for herself. When she and her husband moved to Wisconsin in 1992, Kimberly left the laboratory behind and began creating original stained and fused glass items, which have been sold at galleries and art fairs around the Midwest.

Stop by the Jacksonport Craft Cottage, located at 6275 Highway 57 in downtown Jacksonport, to purchase a signed piece of Lyon’s glasswork. The shop is open 9 am – 5 pm daily or by appointment.