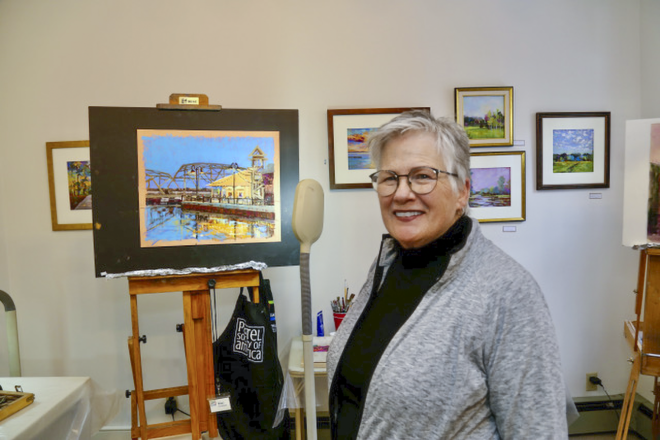 Mac Schueppert, shown here in her Sturgeon Bay studio, tells others it’s never too late to pursue their artistic goals.

On a January day, when the thermometer struggled to reach the teens, Mac Schueppert pointed her phone through fences around Fincantieri Bay Shipbuilding to get photos of recently arrived lakers.

“At this time of year, I am one of those crazy boat nerd people,” she said. “I like to go down to the shipyard in the later afternoon, when the sun is setting over there and the light is shining on the shipyards – that kind of golden hour. You can find me there a lot of afternoons when the ships are in.”

The pastel painter who shows her work at Fine Line Design Gallery in Ephraim is perhaps better known for her landscape paintings of pristine locations around the county, such as Three Springs Nature Preserve, Peninsula State Park and Potawatomi State Park.

Schueppert took up pastels in high school, and her parents encouraged her budding talent by giving her a complete set of Rembrandt pastels in a handsome wooden box. But as her life moved on, the pastels stayed in their box.

“I went off to school and got married, had kids and dragged my pastels all over the country when we were moving,” Schueppert said,” but never got back into them until we settled here.”

She lived in Sturgeon Bay with her husband, Tom, an orthopedic surgeon, from 1968 until 1988. Then they moved away for nearly as long, returning to Sturgeon Bay in 2005.

“When we first came back here, I took a room in our home for a studio, but I was very sporadic about getting in there – once or twice a month,” Schueppert  said. “I always felt I had to have every other aspect of my life done – like the laundry.”

She recalled a day when she was complaining to her husband about feeling like she wasn’t getting better in her art.

“He said, ‘You haven’t made it a priority.’ And that was absolutely true,” she said. “I hadn’t. Once I started, I really saw improvement.”

To further sharpen her skills, she also took classes at Peninsula School of Art and studied with Lynn Gilchrist at The Artists Guild.

Schueppert’s search for scenes to paint takes her from the Mink River estuary in Ellison Bay to Clay Banks in Southern Door, with her husband often along for the excursion.

“I take a lot of photographs, and come back to my studio and do a value sketch,” she said. “I might have three values and then have a photo on my iPad. Between the two, I start my painting, and shortly into my painting, I am starting to react to what is happening on my easel.”

The colors that end up on the canvas, however, are rarely those seen in the actual landscape.

“Say I am looking at a bank of trees. I see a lot of color there – I don’t just see green,” she said. “I work with complementary colors, which make each other pop. If I do a landscape with a lot of green, I do underpainting of warm oranges, purples and pinks, and layer greens on top.”

“Which is one of the things I love about pastels,” she said.

She also doesn’t fix the pastels on the canvas.

“Pastels have this crystal luminescence,” she said. “When you spray a pastel, you flatten it.”

Her works are matted and framed using anti-reflective glass.

Looking back on her artistic journey, Schueppert doesn’t see someone who got a late start. Instead, she sees someone who shows others that it’s never too late to start. Begin by taking a class, she urges. Or visit an open studio. Attend a virtual gathering. Just start somewhere.

“I’ve accomplished quite a bit in 15 years,” she said. “I’m not talking awards, [but] the pure joy and satisfaction art has brought to me. It’s made me grow as a person.”