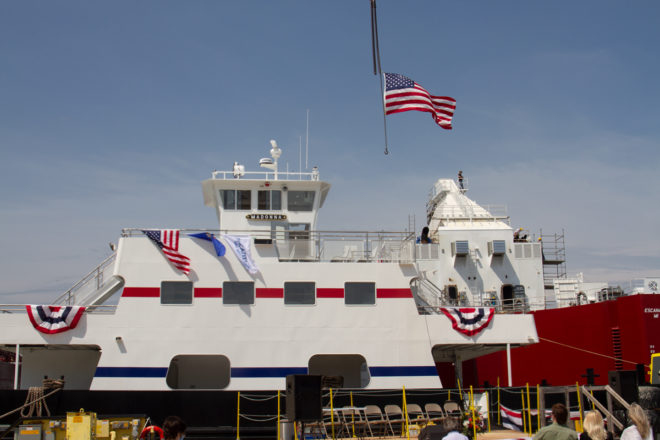 The christening of the newest member of the fleet took place Monday morning before a crowd of guests and employees spread across the shipyard’s tarmac. Speakers for the program addressed the crowd from a wooden platform draped with patriotic bunting, and a giant American flag hung suspended overhead.

“The circumstances worldwide have created a small blessing today, really, in that we’re given the opportunity here today to personally thank the men and women at Fincantieri Bay Shipbuilding for pouring out their hearts and souls to create the newest member of our family,” said Hoyt Purinton, president of the Washington Island Ferry Line. “From the bottom of our hearts, thank you, thank you, thank you.”

Though humbled by giant ore carriers on either side of the new vessel the 124-foot Madonna is the ferry line’s largest ship. It measures 40 feet across the beam and will carry up to 28 vehicles and 150 passengers. Its steel icebreaking features will allow it to transport people and vehicles year-round across the 4.5 miles of Death’s Door, powered by twin CAT-C32 engines generating up to 1,600 horsepower.

This is the third build for the ferry line from Sturgeon Bay. The last one, the Arni J. Richter, was completed in 2003.

The ship took about 14 months to complete. Doing anything during the global pandemic has been more challenging, and shipbuilding was no exception, Thayse said, as the company battled through difficulties to complete the vessel.

“As a matter of fact, we’ve got a couple parts and pieces that are hung up right now due to some transportation and availability with COVID, so this beautiful vessel is going to be here probably for a couple more weeks,” he said.

The origins of the ship’s name came from two places, according to Dick Purinton, CEO of the Washington Island Ferry Line. First, it was the name of the cargo schooner captained by Norwegian immigrant Ole Christiansen, who ran goods to and from the island from 1885 to 1914.

Second, it’s the name of the model ship that’s still hanging today in Trinity Lutheran Church on Washington Island. It was donated by Orville “Butch” Jess and his wife, Karen, in honor of their 14-and-a-half-year-old son, Kelly, who died of cancer in 1980.

Karen said Monday that they had wanted to show their love for the community by donating a to-scale ship that represented the crucial role that this form of transportation played during the care of their son.

“We wanted to thank the communications these ships allow,” Karen said. “And that’s not changed.”

Her thanks extend even further after Monday, given that she christened the Madonna with only one attempt.