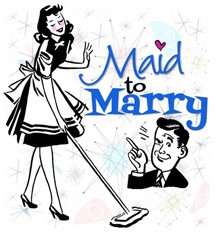 Maid to Marry is a world-premiere adaptation by TAP’s co-Artistic Director James Valcq of the comedy classic La Serva Padrona by G. B. Pergolesi. The story revolves around a wacky maid who plots to marry her boss. When her madcap schemes go awry, she enlists the aid of the butler to accomplish her shenanigans.

The roots of this romantic comedy with music lie in the tradition of Commedia dell’Arte, the forerunner of today’s sketch comedy and sitcoms, in which familiar characters are placed in farcical and improbable situations. In Valcq’s adaptation, the inspirations have been sitcoms such as I Love Lucy, romantic comedies like Pillow Talk, along with a healthy dose of the ultra-stylish, yet misogynistic world epitomized by Mad Men.

According to director/adaptor Valcq, “The source material may be over 300 years old, but the comedy is as fresh and funny as if it had been written yesterday. In staging the piece, I plan on leaving no comic stone unturned. This is a show I’ve long wanted to bring to TAP. We really haven’t done an out-and-out zany comedy since The 39 Steps a couple of seasons ago, so the time seems ripe. I think our audience is ready for non-stop belly laughs.”