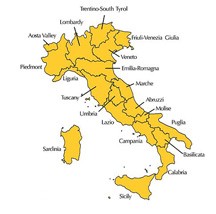 Italy is a vast and complex country in the realm of wine. With 20 regions and a large amount of sub-regions within many of those, Italy produces wines from at least 350 official wine varietals and has plantings of possibly 1000s of varietals.

Of these 20 regions, we are going to take a look at the nine most prominent. Roughly from north to south, they include: Veneto, Piedmont, Tuscany, Marche, Umbria, Abruzzo, Apulia, Campania and the island of Sicily.

Located in northeast Italy, Veneto is along the Adriatic Sea with two distinct sections to the region. First is the flat, low-lying area in the south and the east. Second, is the area in the north and west that becomes abruptly mountainous nearing the Alps. Most of the grapes are grown in the foothills of this area. The most typical red wines made here are a blend of the Corvina, Corvione, Rondinella and Molinara varietals (Corvina considered the best quality of the four). The main white in the area is a sparkling wine made from Garganega-Glera.

Piedmont is best known as the home of Barolo and Barbaresco. Located in the northwest part of Italy, it is bordered on the west by France and in the north by Switzerland. The area is surrounded on three sides by mountains: the Alps and the Apennines. Most of the vineyards are in the low hills and ridges in the central basin of these ranges.

Piedmont is known for the highly acidic Nebbiolo grape as well for Barbera. The white varietals widely grown here are Moscato, Arneis and Cortese.

This is Italy’s most famous wine region, with a large quantity of Sangiovese produced in the Chianti sub-region. Tuscany is located on the Western coast of the Italian peninsula just north of Rome.

The main grape varietal used here is Sangiovese with its hundreds of clones of the varietal used as blending partners. Other blending grapes include Canaiolo Nero and Colorino. The main whites of this region include Trebbiano, Malvasia and Vernaccia.

Marche is situated along the Adriatic coast and is well known for the white varietal of Verdicchio. Leading red grapes here are Montepulciano and Sangiovese.

Following south along the Apennines and in between Marche and Tuscany is Umbria. Best known for Orvieto, which is a white wine made from a blend of Grechetto and Trebbiano grapes. Leading reds of the region include Sagrantino di Montefalco (made from Sagrantino grapes) and Torgiano Rosso Riserva (made from a minimum of 70 percent Sangiovese grapes).

South of Marche and along the Adriatic Sea is Abruzzo. Abruzzo is well known for Montepulciano (85 percent is required, with the remaining being Sangiovese). The leading white varietal here is Trebbiano.

The “heel of the boot,” Apulia is best recognized for red wines under the Salice Salentino name (based on Negroamaro) as well as Montepulciano, Sangiovese, Barbera, Aleatico and Primitivo.

Campania surrounds the city of Naples and is best known for Taurasi, a red wine made from the Aglianico grape. Leading white varietals here include Fiano di Avellino, Greco di Tufo, and several wines made from Falanghina.

The island to the south of Italy is Sicily. Sicily is a high-volume region that best produces red wines from the Nero d’Avola varietal. Crisp whites are also grown here that include Carricante and Grecanico. The island is probably best known for producing the fortified wine, Marsala (made from Catarratto, Grillo and Inzolia grapes).