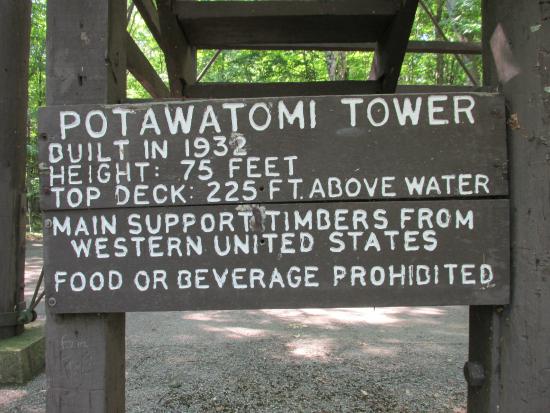 The tower has been closed to the public since late 2017 because of safety concerns. At first the state intended to demolish the structure, but it has since said it’s committed to finding a path forward.

Sixty-eight people joined the virtual meeting moderated by Chris Madison, Department of Natural Resources (DNR) staff specialist. Of the 25 who spoke, all but five favored the tower’s repair. Those who didn’t (four people, including an attorney with the nonprofit Disability Rights Wisconsin) said the tower should be made ADA (Americans with Disabilities Act) accessible, and one outright didn’t support spending the money on the tower’s repair.

The speakers who supported the tower echoed the official letters and resolutions urging repair that have been sent to the DNR during the past year. These include communications from the City of Sturgeon Bay, County of Door, Town of Nasewaupee, Door County Historical Society, Destination Door County, Door County Economic Development Corporation and local representatives Sen. André Jacque (R-De Pere) and Rep. Joel Kitchens (R-Sturgeon Bay), both of whom spoke during the virtual session.

Those who spoke in support of the repair and continued use of the structure cited their enjoyment of it across generations. Betty Parsons said repairing the tower would provide the “best of two worlds,” with the historical tower at Potawatomi preserved, and access to views via the ADA-accessible Eagle Tower in Peninsula State Park and the 10-story Maritime Lighthouse Tower in Sturgeon Bay.

Not repairing the tower and inviting further delays would be “intentional neglect,” said Kelly Catarozoli of the Sturgeon Bay Historical Society Foundation (SBHSF).

Stephanie Birmingham, an individual with a physical disability who has strongly advocated for the tower’s ADA accessibility, cautioned listeners that anyone at any time could join the ranks of the disabled due to accident, injury or age.

“I can assure you to bypass ADA strikes at its very heart and dishonors 25% of the state’s population,” she said.

Others said if the tower were not repaired, it would deprive nondisabled people.

“If it’s either-or, the majority of people should be able to enjoy it,” said Dave Allen.

Kitchens said he had heard criticism from the ADA community that the tower’s historical status had been used to get around ADA requirements.

“I’d say the opposite,” he said. “That the DNR is using ADA to tear it down.”

Letters sent in August 2020 by DNR Secretary Preston Cole to both Kitchens and the SBHSF said the tower needed to be repaired, and those repairs would trigger ADA requirements. The letters concluded that because the DNR could not make the tower handicapped accessible, it would demolish the structure.

With the passage of the Americans with Disabilities Act (ADA) in 1990, access to historical properties open to the public is now a civil right. However, recognizing the need to balance access with the national interest in preserving historical properties, Congress established alternative requirements for properties that cannot be made accessible without “threatening or destroying” their significance, according to the U.S. Department of the Interior’s National Park Service Technical Preservation Services.

In those cases, and working in conjunction with the state historic preservation officer, “special accessibility provisions” may be used for historical properties through alternative methods of access, such as audio-visual programs.

Those conditions apply to the Potawatomi State Park Tower, according to an opinion rendered by Architectural Resources Group (ARG) in Milwaukee in January. In a letter sent to the SBHSF, Julia Ausloo-Bedinger, ARG’s senior associate/architect and documentation technical specialist, wrote that the installation of an elevator or ramp would threaten the tower’s historical integrity and status on the national register.

However ADA accessibility is achieved for the view from the top, several who spoke during the virtual session said that was a separate issue to be addressed after the tower was repaired and reopened. Others wondered how the state had allowed the tower to fall into such a state of disrepair in the first place.

“I’m astounded the tower has been closed since 2017 and there hasn’t been a plan,” said Michael Wagner. “It makes us feel the DNR has been the one that has resisted this all along.”

A Complex Project Rife with Contradictions

The SBHSF has been working toward preservation of the building, as defined by the secretary of the interior’s Standards for the Treatment of Historic Properties. Preservation means work that focuses on the ongoing maintenance and repair of historical materials to protect and stabilize the structure rather than extensive replacement and new construction.

And extensive replacement and new construction are not necessary, according to the 2019 assessment the SBHSF commissioned from Wood Research and Development. Three of the firm’s engineers commented during the virtual session, reiterating their findings that 80% of the tower was serviceable as it stood, and with repairs, it could continue to serve the community for decades.

“Sometimes we see an old timber structure, and we say, ‘Oh, boy, this needs to be torn down,’” said Dr. Dan Tingley, the company’s senior engineer and wood technologist. With the Potawatomi Tower, “this just isn’t the case.”

An assessment of the tower that the state Department of Administration (DOA) commissioned from Brander Engineering following Tingley’s assessment also indicated the repair could be done in situ, but it went far beyond repairing the structural issues.

That Brander report, completed in January 2020, did not assess the tower as a historical structure, as Tingley’s assessment did. In fact, the DOA’s Brander report quoted Mark Dudzik, former state archaeologist, as the authority for the structure’s historical status: “The tower does not have the integrity and significance of a historic structure as measured by federal National Register of Historic Places criteria,” the report said, “and as such, the tower is deemed ‘not eligible’ for listing on the National Register of Historic Places, nor does it possess qualities to make it so.”

The tower was listed on the national register in early 2021, and on the state register in late 2020.

The Brander report indicated that an in-situ repair was possible, but at a cost of $1.5 million, versus Tingley’s estimate for repair of the structural defaults of $249,179. The demolition was estimated at $153,100.

The DNR is aware of the project’s contradictions. Madison characterized it as “complex” and also said the agency was “committed to finding a path forward with the tower’s future,” taking into consideration its “historical significance and accessibility.”

The DNR will review the responses received after the comment period closes Feb. 22, then provide a summary to department leadership, said DNR Program Manager Missy VanLanduyt by email this week.

Included among those who await the DNR’s decision is the Wisconsin State Historic Preservation Office (SHPO), the regulatory state agency that reviews project plans for historical properties to offer a determination on the effect to historical or cultural resources.

“In the case of the Potawatomi Tower, it is our understanding the DNR continues to internally discuss the project further, and we await their notification to continue the consultation process,” said Kara O’Keeffe, SHPO’s public relations and content strategist.