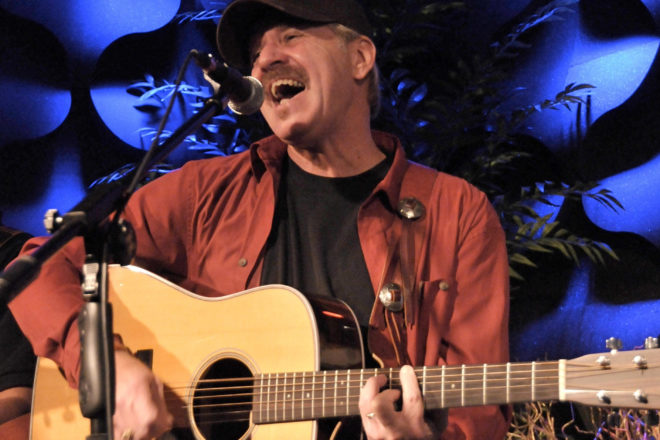 John Ford Coley, one half of 1970s duo, plays Fishstock

If you had to pick a single musical act that epitomized the zeitgeist of the 1970s, how many would name England Dan & John Ford Coley? C’mon, let’s see those hands.

Of course, if not at the top of the list, they would be right up there (top 10, at least) because of their harmonious, soft-rock balladry on “I’d Really Love to See You Tonight,” “Nights Are Forever without You,” “Love Is the Answer,” “It’s Sad to Belong” and “We’ll Never Have to Say Goodbye Again.”

And John Ford Coley doesn’t mind that he and his late partner, England Dan Seals, will forever be associated with the ’70s.

“There was a newness in it, some phenomenal artists. The songs and melodies were memorable, for lack of a better word,” he said. “We weren’t trying to be stars. We were just trying to pay our bills and continue to go out and play music.”

Coley will make his first visit to Door County on Sunday, Aug. 4, 7 pm, when he plays Fishstock (fishstockmusic.com) in Fish Creek. He promises a night of eclectic music with some insight and stories thrown in.

“I just released a CD a year or so ago, and it’s called Eclectic,” Coley said. “I had all these songs from all these years. It’s 26 new songs you’ve never heard before. The second side is pretty much acoustic and ballads. But the first side has everything but Lithuanian disco polkas and rap. It’s country, it’s folk, it’s rock, there’s a kind of jazz thing. Whatever I happened to feel that day.”

Coley is a classically trained pianist. He and Dan Seals first hooked up in teenage bands in their native Dallas. One of those bands – Southwest F.O.B. – had a national hit with a cover of a song called “Smell of Incense.”

“That was on the Hip label, the white subsidiary of Stax records,” Coley said. “They had two groups on the label, Southwest F.O.B. and Nobody Else. Later Nobody Else changed their name to Black Oak Arkansas.”

Coley is full of these insider stories about the music scene of the late 1960s and beyond.

“Dan and I, ironically enough, didn’t get along when we first got together,” Coley said. “He wanted another guitar player in the band, and everyone else wanted a keyboard player.”

But they soon learned that their voices sounded good together.

“Dan had such a great voice, and I sang harmony on everything. That was my forte, and he had his forte. We had this natural blend, and we just continued to develop that,” Coley said. “Dan and I kind of split off from the group. We were kind of opening for the band anyway. We’d go out and sing a couple of our songs, acoustic guitars.”

After playing the Dallas scene, the duo decided to move to Los Angeles, where Wrecking Crew guitarist Louis Shelton heard a tape and gave it to Herb Alpert at A&M Records.

“He said, ‘These guys are a cross between the old Bee Gees and Simon and Garfunkel,’” Coley said. “Herb said, ‘We don’t really have room for that.’ The story goes, Herb was shaving and listening to the tape. He stopped the tape, wiped the shaving cream off his face without finishing, called Louis and said, ‘Get them out here.’”

Seals and Coley made two records for A&M before being dropped by the label. It would be another four years – when they were signed by Big Tree Records in 1976 – before they had their breakthrough album, Nights Are Forever, which went gold and had two hits. Their sudden success prompted A&M to release a “new” recording of the duo from archival material.

By 1979, when they released the album Dr. Heckle and Mr. Jive, Coley and Seals realized they had hit a brick wall: that the industry had put a “chokehold on your neck” and was not willing to hear the eclectic side of England Dan & John Ford Coley. The industry wanted more easy-listening ballads.

“As a matter of fact, when we did the Dr. Heckle and Mr. Jive record, we really branched out. I’d written a lot of the songs, and I don’t stay in one vein. This was quite a departure Dan and I were doing,” Coley said. “I thought, ‘OK, we’re screwed.’ You recognize the fact that you’re relegated to a certain sound. If you branch out, you may get lucky, or you may not. We didn’t get lucky. It’s difficult to deal with.”

They parted ways, and Seals started a new and successful career in country music.

“Dan always had leaned toward the country side of things,” Coley said. “That’s how he was raised. He was really good at that. We said, enough is enough is enough, and called it. There were other extenuating circumstances. Dan went off to country and had a lucrative and successful career in the country market.”