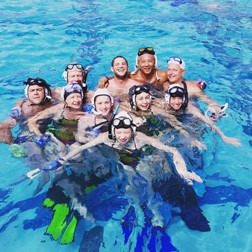 The Door County Sturgeons played at the Underwater Hockey National Tournament in Los Angeles from June 26 – 28. They played a total of 15 games in the three-day tournament against teams from Seattle, Los Angeles, Atlanta, Minnesota, Michigan, Ohio and more. The team finished fifth in the B division, putting them four places ahead of where they finished last year when they were at the top of the C division. Their final game against Chicago was won with a goal by Kendall Banks in sudden death overtime.

The Sturgeons practice at the Sturgeon Bay YMCA. Summer practice is from 5:15 – 6:45 pm on Fridays, and the team welcomes new players of all ages.