Theresa Waniger taught only during the 1882-83 school year when School No. 6 in Nasewaupee first opened, but she must have made a big impression on the community. From that time on School No. 6 has been known as the Waniger School.

The classic one-room schoolhouse that closed its doors in 1960 is now opening them in a new location, thanks to the work of retired Southern Door elementary art teacher Judy Jesse and her small army of volunteers. 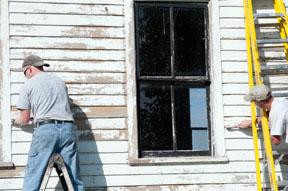 Two men work on the exterior of the relocated and rehabbed Waginer School in Southern Door.

Jesse had five years of experience when in 1963 she accepted a teaching position at Southern Door. “I’m not from the community, not previously tied to the school,” she said, “but my interest stems from my first year of teaching at Southern Door, the best year I had in my 39 years of teaching.”

As an elementary art teacher she traveled to 10 of the one-room schools to give weekly art instruction. Her first year in the district was the last year that those schools operated.

As Judy and Gordon Jesse run Shades of the Past Antiques north of Egg Harbor, she has an appreciation for antiquities, a reverence for the past. “When I retired,” she said, “I saw so many of those one-room schoolhouses disappearing, so I decided to form a committee to preserve the history of the schools in the Southern Door area,” a project that includes both public and private schools.

Under Jesse’s leadership as School Archive Coordinator, the committee amassed a collection of records, photographs, and other artifacts associated with Southern Door Schools in the past, including an original ledger for the Waniger School House dating from 1881 to 1944, all housed in an archive room at Southern Door Schools. “It’s getting quite full!” she said.

“We were looking for a little schoolhouse we could use for our collection,” she continued, “and discovered that the Lincoln brick school house was up for sale. In January of 2008 we toured it, a beautifully restored building, but very expensive.

“One of the committee members said the Waniger School could be available,” Jesse said. “We toured it the same day and thought it would be a fun project to take on.” Unlike the Lincoln School, this building had not been restored, but the price was right. “Randy Weckler offered to give it to us with the stipulation that we move and maintain it as a historic building.

“I had no idea what I was getting involved with when I agreed to accept the schoolhouse restoration project!” she added. “But it was too special an opportunity to pass up!”

Once the restoration is complete, the building, which is now located on Southern Door School property near the elementary facility, will be given to the school district as a gift with the understanding that Southern Door will be responsible for its use and maintenance. The archive committee will continue to be involved in the further development and implementation of the project, which will become a living museum for students to experience early education in the Southern Door area. 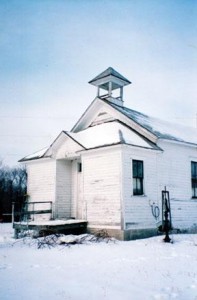 An old image of the school.

Fourth graders in Wisconsin, for example, are required to study the history of the state. “What better place to study that history than in a historic building relating to education” that was part of the state’s past, she said.

The building will not only house artifacts collected by the Southern Door Archives Committee (also chaired by Jesse), but will serve as classroom space for activities that are part of the school curriculum, and as a meeting place for school groups and community organizations.

“I certainly would never have agreed to take on this project without the support of the committee and members of the local community,” she said, especially since the restoration is being accomplished at no expense to the school district or local taxpayers, as all funding is being acquired through fundraising, grants, and private donations, using Southern Door Schools tax-exempt status as a repository for funds.

For Jesse the undertaking has been an education, “all the hoops I had to jump through!” she recalled, obtaining permits, getting permission from the school board, writing grants, getting estimates from local contractors, creating budgets. “I learned a lot!”

Volunteer Hans Feld made a model of the Waniger School with a slot in the roof, allowing it to be used as a donation box at fundraisers, such as the Raising the Roof benefit concert last March featuring the Oak Street Boys Barbershop Quartet and the Southern Gospel Quartet Four the Cross. As mistress of ceremonies, Jesse portrayed the first schoolmarm Theresa Waniger, exhorting good behavior from the performers and audience, scolding latecomers and reminding audience members to use the facilities during “recess.”

Less formal fundraisers have included a garage sale hosted by Jesse at her home selling donated items, an event attracting 1,300 people and raising over $1,500. The rummage sale will be repeated on Labor Day.

Teachers at Southern Door brought chili and potluck dishes for a communal lunch, each donating $5 to the restoration fund.

And local artist Maggie Weir created pen and ink drawings of the Waniger Schoolhouse that have been used on note cards offered for sale.

The first stage of the restoration involved preparing both the building to be moved and the new site to house it. Multiple layers of shingles were removed, as was the top of the roof to clear power lines. The chimney and porch were taken off, the interior stripped down to studs and the frame braced for travel.

The top layer of fiberboard was removed from the inside to reveal lath and plaster which was taken off to expose tongue and groove planking that covered walls and ceiling, all painted a soft green, a color that retired school custodian Don LaLuzerne said was called “eye rest green.” Mysterious chalked cursive text and numerals appeared on the wallboards. Originally the plan was to re-plaster the walls, but now the planking has been carefully removed and is being stored; once the electrical and insulation work is completed at the new site, it will be re-applied and retain the original green color. However, the coatroom will be plastered, as it was a later addition.

The Waniger School originally was located about five miles from the Southern Door Schools near the Salem Lutheran Church on County C not far from County MM. The journey to the one-room school’s new home began at 4 am, July 7, 2009, with a police escort. A cement slab and new foundation awaited its arrival at Southern Door Schools.

Now in stage two of the restoration, the roof structure has been replaced and re-covered using local white cedar shingles made by a craftsman in the area. A replica bell tower is being added and the exterior of the building painted.

Stages three and four will include electrical, heating, and insulation installations; restoration of windows; and finishing of the interior work along with exterior landscaping. The restored building will feature desks on skids (some original to the school), globe fixtures in the main room and electrified “kerosene” lamps in the coatroom.

“I hope the project will be completed in a year,” Jesse said. “The hardest and most expensive parts we’ve dealt with, but we still need funding for the electrical work, painting and insulation.”

While many volunteers, including past and present students, have worked to make the restoration become a reality, Jesse singles out former student John Spude and contractor Art Lopas as driving forces in the project.

“I wonder if the people who built the schoolhouse had any idea that it would be continuing on today!” Jesse said. “They’d be smiling, ‘That crazy art teacher!’”

After the concrete slab was poured Jesse used a stick to write in the wet cement “Waniger School 2009,” leaving her mark to be hidden under the schoolhouse that is “preserving a piece of Door County history,” she said, “that we will be able to share with our students for generations to come. What a great legacy!”

Tax-deductible financial contributions to this legacy may be made to Southern Door Schools, the Waniger School Project; volunteers may contact Judy Jesse at 920.743.9730.