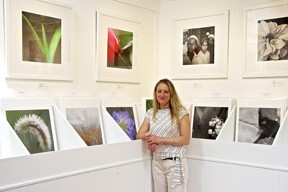 Sutra features an array of photography with subjects ranging from flowers to Indian children by owner Abbey Box. Photos by Len Villano.

“Sutra in Sanskrit stands for thread,” Jitendra Suman wrote on the Sutra Gallery website, “which in terms of time and space connects the past with the present and various distant points in the future.” Suman and his wife Abbey Box chose the name for their new gallery in Ellison Bay because of the many connections the business represents: personal, cultural, and literal.

Visitors who enter the gallery will find a museum-quality display of primitive and modern paintings as well as textiles from India; and photographs of subjects both from India and this country digitally printed on watercolor paper. The airy white walls of the gallery provide a sense of space that transcends the boundaries of the building. 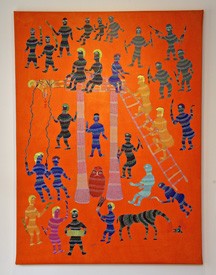 Box opened the Sutra Gallery in May and hopes to be joined by her husband in August for an official grand opening. Their personal story is one of a life-changing connection.

Box, who graduated from St. Norbert with a BFA in art, specializing in photography, had spent 17 years on the East Coast where she trained professionally in digital fine art reproduction. Her boss called her “a master printer” she laughs. Now she uses the same Iris giclee technique to print her own photography for the Sutra Gallery.

In addition to her fine art reproduction work, she maintained a website promoting her own photography. A man from India contacted her through the site, and for six months they maintained an email correspondence that developed into a romance. Jitendra Suman has a doctorate in history specializing in ancient Indian religions. She found that he is a writer (during the course of their long-distance courtship, he wrote fifty poems for her) and a student of Indian art (he now provides contact with artists who exhibit in their gallery).

In 2012 Box put all of her possessions in storage and boarded a plane for India to meet the man that she had come to love. “We had felt connected by an invisible thread,” she said, and when she met him in person, their love developed to the point that she and Suman decided to marry; she wore a traditional pink trouser and tunic suit for her Hindu wedding so far from Wisconsin that only his family and friends could attend.

At first she had planned to make India her permanent home, but the concept of a gallery featuring Indian artwork was born, capitalizing on her connections with this country and his with India. Both their relationship as well as the gallery venture became a connection between two cultures. “Everything is connected,” Box said, “everything is larger than yourself.” 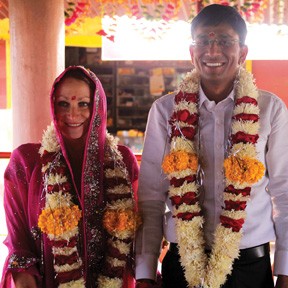 After an online courtship, Jitendra Suman and Abbey Box married in India in 2012. Photo submitted.

Suman now plans to make the United States his home, but in retrospect the couple now knows that had he come to this country on a tourist visa before they married, the immigration process would have been simplified. Because they wed in India, he does not qualify for a tourist visa. Subsequently Box returned to her country to make arrangements for the gallery, purchasing property in Ellison Bay, and arranging for remodeling to make the space suitable for the business.

“He is in India” while the immigration process grinds slowly forward, Box said, “shipping things to me, over 250 paintings under the roof” representing 20 artists. “We hope he will be here in three or four months,” completing that connection, she added. Coincidentally, some of the artists featured in Sutra were wedding guests, Box said, pointing to a number of the paintings displayed in the gallery.

In addition to photography and paintings, the gallery features textiles imported from India, “woven on hand looms, hand-dyed and hand-printed,” Box said, “using old traditions, all done in India in the state where the artists live. I know they are all hand made.” In this instance, the thread becomes literally thread.

A visit to the comprehensive Sutra Gallery website is a lesson in the art history of India written by Box’s partner Suman. The contemporary paintings represent “a continuous assimilation of foreign cultural values into the larger Indian culture” he writes, “and the contemporary contradiction, at both the individual and social level.” The artists included in this group, he continues, represent “diverse age groups and backgrounds,” from various regions in India, and “specialize in both abstract and figurative work.” Most have “a strong presence in both the national and international art market.” 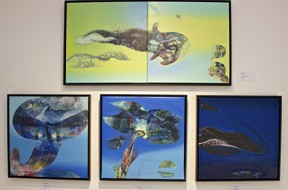 A series of untitled artwork by Indian artist Balu Chaudhari.

The Tribal collection, he notes, “includes paintings and murals from two main tribal communities of central India: Bhil and Gond.” These artists “represent an urge…[to be] free from the influence of Western or mechanistic industrial society.” In a style that may be characterized as naive, the paintings often depict as subjects native flora and fauna along with mythological themes.

Of Box’s photography of India, he writes “she has captured honest moments in their spirit of pure Indianness…true vibrancy amid the dust.” During her stay in India, he continues, she participated in “the whole of Indian life” which “helped her to understand the inner core of Indian life,” a realization that is reflected in her photographs.

“The refreshing diversity of Indian handicrafts stands out in a sea of present day global industries who churn out repetitious, mass-produced textiles,” Suman writes. Both cotton and silk have been produced in India for many centuries, and honoring that tradition Sutra offers textiles that are hand-spun, hand-woven, and hand-printed, including saris, stoles, scarves, and coverlets. 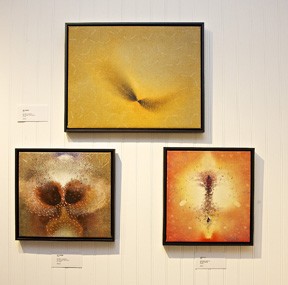 A series of untitled artwork by Indian artist Promod Gaikwad.

While the work shown in Sutra clearly reflects the culture of India, visitors to the gallery will notice the universality of the art, the many connections that can be made to other cultures, whether noting the mixture of Indian and American subjects in the photography of Abby Box, the evocation of non-Indian parallel traditions in some Western folk art, or the over-lapping modern techniques in the contemporary pieces.

These connections become apparent, as Box points to a piece by Bhuri Bai in her gallery, and notes that the artist’s work has been sold at Sotheby’s, and that three other gallery artists have been included in Indian Contemporary Art, a book compiled by Herve Perdriolle, a French art collector who has a gallery in Paris.

Box is pleased with the community’s response to Sutra, and noted that she has already sold work, one piece before the gallery had officially opened. To explore where the “threads” of Sutra lead, stop by the gallery at 12044 Highway 42 in Ellison Bay, open daily10 am – 5 pm (closed Mondays) from May through December. For more information visit sutragallery.com, call 920.854.2880, or email [email protected].

Box has created two published-on-demand books that document her relationship with Jitendra. One is a collection of the poems he sent her during their long-distance courtship; opposite each verse is one of her photographs. The other is a wedding album filled with vibrant photos of her wedding in India. Visitors to Sutra Gallery are welcome to page through the books not only for the background of the business but the cultural connection that the gallery represents.