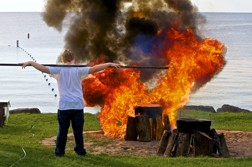 Fish boils, including the dramatic boilover, have been a Door County tradition for decades. Photo by Len Villano.

It seems that while fish boils are good for business, they may not be so great for the environment.

“What they do at a fish boil,” says Steve Leonard, executive director at the Ridges Sanctuary, “is they throw kerosene onto the fire to get a boil-over. When you boil the fish it creates an oil on top, and so they throw the kerosene on the fire and it creates this flashover. It’s very dramatic.”

The kerosene that creates the flashover doesn’t always make it into the fire though; some of it usually hits the soil surrounding the boilpot. So when the Ridges began to consider buying the Baileys Harbor lot where the Sandpiper restaurant held its fish boils, Leonard became curious.

“Our concern,” he says, “was, using kerosene in the same spot, three times a night, six times a week, was there an accumulation in the soil?”

The answer was yes. At the end of the 2010 season, Donn Valenti, former owner of the Sandpiper, paid for OMNNI Associates, an engineering firm based out of Appleton, to conduct an environmental survey on the site.

“They discovered that it’s not a water quality issue,” says Leonard. “It’s kind of a cone-shaped contamination that goes down about 10 feet or so to the bedrock.”

In those 10 feet, the kerosene mixed with the soil and created a kind of black tar substance. Now that they knew what they were dealing with, The Ridges began to plan what to do next. 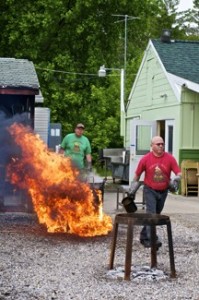 The Viking Grill in Ellison Bay was one of the first restaurants to popularize fish boils, and now a number of restaurants throughout the county are hoping to make the practice more sustainable. Photo by Len Villano.

Meanwhile, Valenti began to develop a fool-proof kerosene delivery system. “In 2010 and 2011, Donn experimented with different things to control the kerosene,” says Leonard. “One thing he tried, was he put in a cement containment system.”

That, however, didn’t work, so Donn switched to a different system. He put his boilpot inside a metal container and used a dripline to deliver the kerosene to the fire. That way none of it would be able to spill on the ground.

Recently, Andy Coulson, owner of the White Gull Inn, has been working to adapt Valenti’s techniques to his own boilpot.

“We’d already reduced the amount of kerosene we were using by 80 to 90 percent in the last several years by using sawdust instead,” says Coulson. “We were interested in their system, and Steve was nice enough to lend us their equipment.”

Coulson has had to modify Valenti’s design, but he now has a system which captures any and all kerosene used to create his flashovers. “Each week we got better and better,” Coulson says, “and it’s still an ongoing process where we’re tweaking it.”

Fish boils, a Door County tradition, date back further than a lot of the county’s current residents, so it’s important to the county’s restaurateurs that they continue to be a sustainable practice.

LeClair says that while she is definitely interested in the modifications being made by Coulson, those modifications raise some questions of their own.

“I think the funnel they’re using there is dangerous to the boiler,” she says. “There are nights when the wind is swirling around and, for me, the concern would be the danger to the boiler when the fire flashes back at them.”

While the system for delivering kerosene to fires at fish boils may still need to be tweaked, the plan for the contaminated land at the Sandpiper is in place. The Ridges will use the contaminated soil, along with a special mix of compost and the old wood from the Sandpiper building itself, to restore one of the ridges on the preserve and begin a process known as phytoremediation. Eventually, plants will be put in the soil that will break down the kerosene.

In addition, students from Lawrence University will use the site to conduct experiments into other remediation techniques.

The most important thing now, according to Leonard, is to continue with the brand of community problem solving that has been used to handle the issue so far.

“What’s exciting about this is, Andy Coulson stepped forward and basically took the torch from Donn. Donn implemented something, and he invested a lot of money into that monitoring. He wanted to come up with a solution. Now Andy’s taking that role over, modifying Donn’s techniques, and sharing that so that fish boils will always be around.”