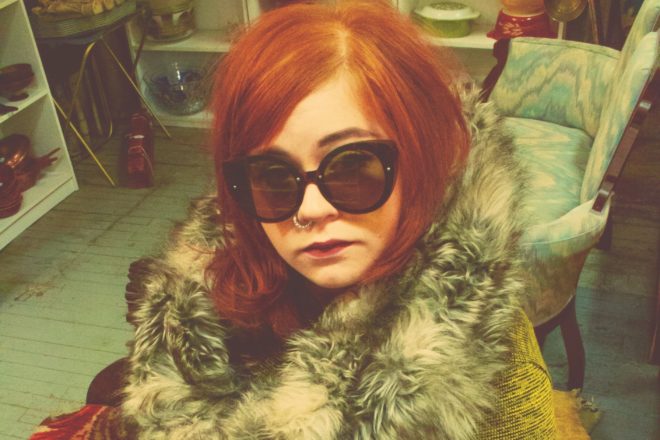 Psychedelic soul/rock ‘n’ roll singer Abby Jeanne was gifted a couple things:  a minivan from an old friend and a voice that’s smoky and sultry and draped in allure – both things bringing her around the world. She’s hitting the road once more and heading to Door Co. Brewing Music Hall, and the Pulse talked with her about her musical history and future.

Jeanne spent all her life attending art schools in Milwaukee, yet she didn’t pursue music. In fact, she avoided it publicly and pursued visual arts instead, writing privately. It wasn’t until her family faced some traumas, including the death of her sister, that she decided to take the natural born talent she knew she had and follow it.

“Once I gave in to it, it’s become my biggest passion of all time,” Jeanne said.

After being gifted the minivan, she decorated it herself, including a futon and curtains, and hit the road. She was making music with her first band at the time, Eden-Abby, and after her bandmate fell in love on the road in New York City, she lived in the minivan alone for the next year touring across the country. Then she lived and toured throughout Europe for the next few years.

Following her travels, she returned to Milwaukee and fixed up a permanent home with her mother. She’s been making waves there ever since, garnering lots of local support and even some awards. Her affinity for rebellion and independence has been key to her success and appeal as an artist.

Rebellion and independence shaped her person early on. While attending art schools, she learned that art and politics go hand in hand, and often times you’re making a statement with it, she said. She feels that there’s much more to life than the norm, and that’s how she grew up.

“My natural instinct is to always go in the opposite direction,” Jeanne said. “I think that’s how you can make a difference in the world.”

Jeanne’s pretty much navigated everything on her own. When on her first tour, they didn’t even have legit shows booked. They’d play somewhere and if people wanted them to stick around for a little while, they would. On returning to Milwaukee and fixing up the house, she learned how to put in floors and put up drywall herself. When it came time to record her debut album Rebel Love in 2017, Jeanne turned part of her house into a studio, recorded it, and learned how to produce it herself.

It’s safe to say that if Jeanne wants to do something, she’s going to darn well do it.

Jeanne is working on her sophomore album now, but this time she’s doing it in studio with another producer (who also produced her singles “Cosmic Beings” and “Be in the Sun”). That doesn’t mean she’s losing independence by any means. Teaching herself how to do it has given her more artistic control, she said.

She’s also doing more vocally and is excited to share its diversity with people. Aside from the record, she’s doing collaborations with a number of musicians from outside Milwaukee, too.

2017 was a big year for Jeanne, but it sounds like 2018 is going to be right up there with it. She hopes to continue connecting with people and making statements, and aspires to be able to heal people through music.

“Love is the number one thing ever in the entire world,” Jeanne said. “It’s the most important thing and I think love itself is a rebellious act.”