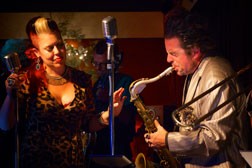 At one point during the historic Aug. 15 performance of WIFEE and the HUZz BAND at Florian II in beautiful downtown Baileys Harbor, I swear the roof levitated for just a moment when baritone saxman Adam Plamann delivered a bone-shaking low note.

That was just one of many high points of a truly exciting night of music. Florian’s was hopping with dancers and people just generally digging the sound and the scene. The band and the room felt like they belonged together. The music was infectious.

And here’s a prediction: In the not-too-distant future when WIFEE and the HUZz BAND are on national stages, a lot more people are going to say they were there that night at Florian’s than truly were there. I feel confident in making that statement because this is a band that seems to have everything in place.

As the name suggests, the band features a married duo – Ruby James and Stephen Cooper (aka Kitty CoopDeville and CoopDeville – Cooper had his high-finned Caddy parked outside Florian’s). 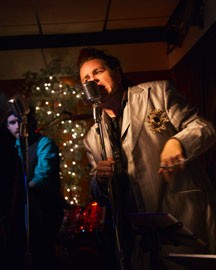 The couple takes turns singing lead, and Cooper also plays supercharged soulful sax and writes the rocking horn arrangements for the four- and sometimes five-horn section. That alone could seal any deal because both of these people are brimming with the right stuff, and together they make it sizzle. You can almost hear the crackle of electricity between them.

But do not mistake their twin-peaked high hair-dos and mannered theatricality for simple schtick. This is a focused and hard-working band, and they have a CD to prove it – Songs of Eternal Love and Immediate Satisfaction.

“We’ve been together 10 months,” Cooper said during a break after the first blistering set, in a way that tells you he knows – and everyone involved knows – that this is right. “In all the bands I’ve been in, I’ve never seen it come together like this.”

The band includes a crack rhythm section and a fearless horn section. The musical style is a combination of swing/Motown/Stax/Muscle Shoals/soul/pop.

I first met two members of the band when they were members of the horn band The Groove Hogs and I was an entertainment reporter for a daily newspaper in the Fox Valley. In addition to seeing Stephen Cooper and Adam Plamann in the Hogs, I’d see both those guys out jamming at Appleton music clubs and supporting the scene. (Trombonist Tommy Vanden Avond was also a member of The Groove Hogs, but I don’t recall ever meeting him.) 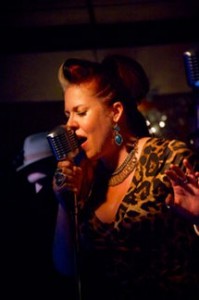 One big surprise of the night for me was Cooper’s singing. I always knew he had command of his saxophone, but I had no idea that he has a great set of pipes, which is something he said really developed out of his horn playing.

The other big surprise was Ruby James, who appears to be a force of nature.

The couple came together through the musical magic that happens at the Holiday Music Motel and the songwriting sessions that precede the annual Steel Bridge Songfest. All of the original songs on the CD were written at the Holiday Music Motel. Fittingly, the CD is produced by Songfest Svengali pat mAcdonald, and engineered by house engineer Steve Hamilton, and recorded at Hamilton’s Makin’ Sausage Music in Milwaukee.

Somehow, the magic of WIFEE and the HUZz BAND is captured on CD, beginning with Ruby’s great CD opening line on “She Won’t Go.” The one cover – “Girl Can’t Take It” – is an absolute showstopper. Ruby seems to channel Diana Ross on “Our Love.” And I can’t help thinking of happy times reading to my children every time I hear Ruby sing “Goodnight Moon” – each time I am fooled into believing she is going to sing the Margaret Wise Brown classic.

The band lineup on the CD includes Vee Sonnets on guitar, Greg Roteik on bass, Zach Vogel on drums, Kipp Wilde on keyboards, Tommy Vanden Avond on trombone, Greg Garcia and Kurt Shipe on trumpet and Julio Reyes on bari. The previously mentioned Adam Plamann was obviously on baritone sax for the Florian’s gig, and there was only one trumpet, and I don’t think it was either of the guys on the CD.

My advice is to catch this band locally while you can, which you can do at the Stone Harbor’s Summer Patio Party on Sunday, Aug. 24, starting at 2 pm. Note, this is an all ages show.

Five days later, on Aug. 29, the band will be in Laramie, Wyoming, opening for Morris Day and The Time at the Snowy Range Music Festival.

Mark my words, they won’t be an opening band for long.

Check them out at wifeeandthehuzzband.com.