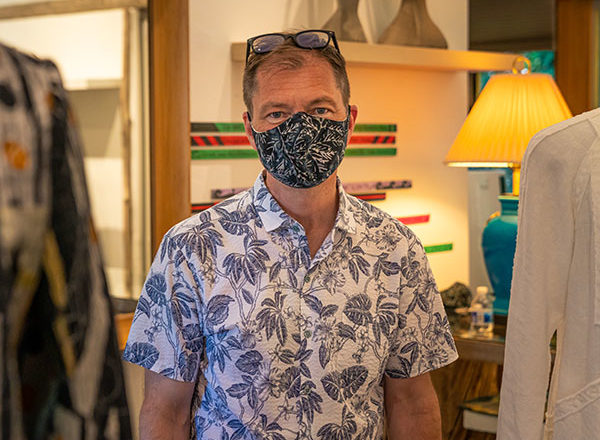 Art comes to the newest of everyday wearables

When COVID-19 threw a curveball at the world earlier this year, there were people who watched the trajectory and followed it to places they may never have imagined they would go.

So it was with Peter Ciesla.

He’s a textile/fiber artist and a designer of one-of-a-kind clothing. He sells his pieces from his Bazyli Studio Wearable Art Gallery, which is just a short walk from the front porch of the Baileys Harbor home that he has shared with his artist wife, Skye, for the past 18 years.

A glass case within the shop displays jewelry that he and Skye have created together. Atop that case, near the handmade earrings, are objects that have become all too familiar: face masks.

But these are not just any masks: They’re constructed with organic fabric liners. Ciesla creates the top layer using textiles from his stock — largely organic cottons, linens and hemps. Then he prints or hand-dyes some of those tops with plants he’s sourced on their 11-acre property. On others, he hand-stencils a favorite Dylan verse. All will surely feel as though they were constructed by a custom clothier — as they indeed were.

Yet they were also, strangely enough, constructed by a nurse.

Ciesla had been designing and playing with fabrics since he was 11 years old, but he left Poland for the United States as a political refugee with dual citizenship and a freshly minted nursing degree. (He’s not Polish, however. He’s Lemko — a nationality that’s part of a small ethnic group that’s lived in the southeast of Poland for 11 centuries.)

Ciesla found a job caring for a man in an affluent suburb north of Chicago. In that milieu of interesting people, he met a woman with a need for a custom wardrobe designer. She became Ciesla’s client, friend and mentor, and she introduced him to many of his future customers.

The springboard was launched. He and Skye moved to Door County, where he had the freedom to design his own creations for his business, Bazyli.

The custom designer and nurse who both live within Ciesla collaborated again when COVID-19 hit in early March. His nursing instinct showed up first.

“Masks, masks, we need to get masks,” he recalled in his lilting accent. When they could find none online, his primary vocation took over: “Well, I’ll make them.”

Ciesla came up with a template for how a good mask would function and be built. He made some for his family and a few for friends. One of them posted the mask on social media.

“Suddenly — I wasn’t planning on it at all — suddenly people are messaging me inquiries about the masks,” he said.

It snowballed. Now Ciesla ships them all over the country.

“First of all, it helps us somewhat because our business completely tanked when this whole thing happened,” he said. “Everything stopped. Shows canceled, travel canceled, can’t do anything.”

Then also, when people called to order the masks, he learned their stories.

“It’s amazing,” Ciesla said. “When you start talking to people and they feel comfortable to share things … you learn people have all sorts of issues related to respiratory problems and concerns and worries. So you help people. It’s a combination: It helps us; it helps people.”