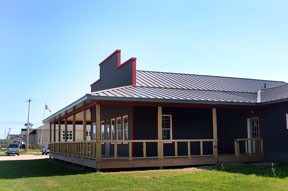 After a devastating fire in June 2011, Glenn and Doris Thorn rebuilt the Carlsville Roadhouse, maintaining as many characteristics from the old building as they could including the parapet façade. Photo by Katie Sikora.

As of July 18, the Carlsville Roadhouse is back in business with a brand-new building and the same-old owners – owners who are ready to get up on their feet again after a June 2011 fire destroyed the original restaurant.

“We’ve gotten a lot of compliments on the new building,” says Doris Thorn, who owns and operates the Roadhouse along with her son Glenn. “People like the way we tried to keep it looking like the old building.”

Doris and Glenn say it was important to them that they preserve the history and style of the old Roadhouse, which they had owned for 25 years and had been a part of the Carlsville community for over 100 years before it collapsed in last summer’s fire.

Glenn, who began designing the new Roadhouse a week after the fire, says that he tried to keep as many elements of the old building as he could, including the wood flooring, the tall ceilings, and the outside parapet façade.

“I thought it was important to bring that back to the community, because they’ve been passing by it for 106 years,” says Glenn.

But not everything about the Roadhouse is the same. 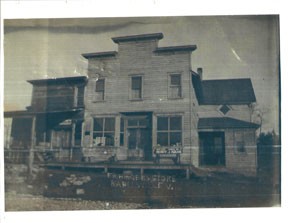 Firefighters and equipment from every Door County fire department (except Washington Island) assisted in fighting the fire at the historic structure on June 14, 2011, but the blaze was too hot and the damage too severe to salvage the building. Photo by Myles Dannhausen, Jr.

Conspicuously absent is the original building’s dance hall, where blues bands used to rock the night away. The Thorns say that they simply didn’t have enough money to rebuild the dance hall with the restaurant, but Glenn is hopeful that the Roadhouse will rock again.

“I gotta get back on my feet first, but I’d like to do a few shows a year,” he says. “There’ll probably be only two shows this year.”

The first of those shows is slated for Saturday, July 28 during the 11th Annual Carlsville Day, when the band Blues Disciple will set up shop on the new outdoor patio/stage at the Roadhouse.

“I’m pretty sure it’s gonna be a mob scene,” says Glenn. “I could not believe the business we did on opening night. It was crazy, crazy, crazy.” 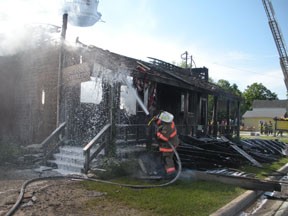 Built in 1905, the Carlsville Roadhouse stood as a historical landmark on the way to northern Door County. Photo courtesy of the Egg Harbor Historical Society and Doris Thorn.

The community has been instrumental in supporting the Roadhouse during the rebuilding process, say the Thorns, and they’re extremely happy that so many customers have returned to the restaurant now that it’s finally open again.

“I can’t thank the township enough for working with us and all our neighbors for their support,” says Doris. “It’s a good feeling to open back up again and get all the support we had.”

Glenn says that he still misses the old building, but after a rough year of working to get everything back in order he’s happy to finally be moving forward.

“Last year, it felt like everything was backwards. This year everything’s headed in the right direction,” he says. “It’s time to move on, and we’ll reminisce with the old memories and hopefully make a lot of new memories.”