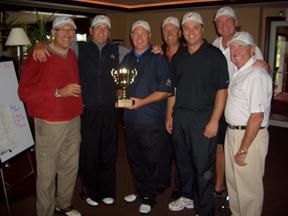 The team of Horseshoe Bay, winners of the 2009 Door County Cup.

Touted as one of the three biggest amateur tournaments directed by the Wisconsin State Golf Association, the Senior State Amateur took place this year at Horseshoe Bay on August 24 and 25. A total of 218 golfers teed off in the two-day, 36-hole stroke play competition in which players had to earn qualification, and be 55 years or older to compete.

Gary Menzie from The Bog finished four under with two-day scores of 67 and 73 (140) to win the tournament. Of the local contenders, John Goettleman had the best showing tying for 64th with scores of 81 and 82. Dick Brisch and Mike Woldt both tied for 10th in the net division with combined low net scores of 144.

Here’s a trivia question for my fellow golfers…what do the Tavistock Cup and the Door County Cup have in common? Maybe I should ask this first: Have you ever heard of either tournament? The last question you can answer silently to yourself, while the unofficial answer to the first question is: so much and so little.

Both are two rather unheralded tournaments, both in the embryonic stage of their respective golf worlds. The two tournaments are fashioned after the popular Ryder Cup format in which the American team of professionals compete against their fellow PGA pros from Europe.

Each March for the past six years, The Tavistock Cup has pitted the touring professional golf members of Lake Nona and Isleworth, two private golf clubs in the Orlando, Florida area. In its second year, the Door County Cup pits a handpicked selection of non-professional members of the Horseshoe Bay and Maxwelton Braes golf members in a two-day tournament, held August 28 and 29.

The Tavistock Cup has a $3.5 million purse. The Door County Cup has…well, a trophy, and the priceless rights to brag until next year rolls around.

Friday’s competition took place at Horseshoe Bay with two nine-hole matches: the first being best ball, the second being match play. At the end of the day, Maxwelton Braes led with a score of seven to five.

Play switched to Maxwelton Braes on Saturday as the home team looked to maintain the lead and seek revenge from last year’s loss. Again, two nine-hole matches took place, first better ball, then match play. As the weather turned ugly and the rain fell steady, Maxwelton held the lead 11 to 9 going in to the final four matches. However, in an impressive come from behind victory, Horseshoe Bay rallied and won the last four matches to make the final score 13 to 11, and to take home the 2009 Door County Cup.

During this week, DCGA members and members of local Door County golf courses are eligible to play at Horseshoe Bay for $64 for 18 holes (cart fee is additional). Ten dollars of each round will be donated to the DCGA, whose mission is to promote youth golf and the overall growth of golf in Door County. 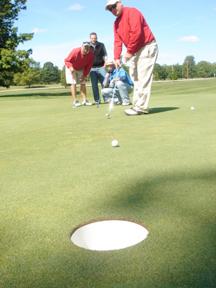 Fred “Fredo” Wahlen sinks his putt on Hole 18 while his teammates look on.

Twenty-two foursomes turned out for the annual Big Cup Scramble held at Maxwelton Braes on Sunday, August 30. For one day, the traditional golf cup changes to a “big cup,” which is approximately eight inches in diameter with tricky pin placements. The young gun team of Aaron Slaby, Lukas Willems, Michael Williams, and Taylor Mueller came out on top with a score of 12 under. The mixed division winner was the team of Pat and Deb Helen, Mary Ann Faby, and Dan Fisher.

The 35th annual Curley Paul/Jocko Rader 19th Hole Open is set for Thursday, September 24 at Idlewild Golf Course. The tournament is open to all ages. Tee times are between 11 am and 1:30 pm, and players are welcome to form their own foursome. This stroke play tournament will be divided into three divisions: Men with handicaps under 20, men with handicaps 20 and over, and women’s.

There is still time to sign up. For further information or to register, contact Jocko Rader at 920.743.3522.

The Door County Home Builders Association (DCHBA) is taking reservations for its annual golf outing and fundraiser on Thursday, September 10 at Idlewild Golf Course. The four-person scramble format begins with a shotgun start at 1 pm.

Cost is $85 per player, which includes 18 holes of golf with cart, refreshments on the course, buffet dinner, silent auction and raffles. Proceeds from the annual event’s silent auction and other activities benefit the “Building a Better Wisconsin” political action committee (PAC) of the Wisconsin Builders Association (WBA). DCHBA members are affiliated with the WBA.

There is still time for registration by visiting http://www.dchba.org or by contacting Jeff Dorner at [email protected] or 920.868.2352.