Fall is upon us and this issue concludes the second year of the Peninsula Pulse’s Golf Page. I hope you have enjoyed it as I have as well. It has been fun receiving feedback, submissions, and suggestions from my fellow golfers almost on a daily basis. Please keep them coming!

You may always contact me about upcoming events, story ideas, player profile suggestions and more at [email protected]. Winter birds, please keep us updated on your whereabouts and any interesting golf news to share.

We had some new additions to the Golf Page this year. Thanks to our local pros, Jason Daubner (Peninsula), Pete Mogg (Horseshoe Bay) and Randy Meyer (IdleWild) we received regular “Tips from the Pro” useful for all levels of golfers. We also had a great response to those that participated in our weekly “Caddy Quiz ‘Em.”

And now for our season in review, highlighting this year’s golf events. Until next year my friends, keep it in the short grass!

After a winter and spring of speculation and uncertainty, Maxwelton Braes Golf Course will be open this summer after all. Paul Becker, a Baileys Harbor native who learned how to play on the course, has signed a lease with Baylake Bank to operate the course through the summer.

Through a “Learning In Retirement” program organized by Northeast Wisconsin Technical College (NWTC), Pete Mogg, Head Golf Professional of Horseshoe Bay Golf Club, hosted a putting clinic on Wednesday, May 19. Approximately 25 “retirees” attended the clinic where Mogg taught the fundamentals of both the physical and mental aspects of putting. This was the first clinic of its kind held by Mogg at Horseshoe Bay.

Ehlers is Great at State

With an individual score of 78 at the High School Sectional Tournament in Hunter’s Glen in Crivitz on June 1, Sevastopol junior Ben Ehlers, became the sole county golfer to advance to the State Tournament. Ehlers finished third overall individually in a field of 52 golfers competing at the Division 3 level at University Ridge in Madison, June 7 and 8. Ehlers came into the clubhouse with two-day, 36-hole score of 159 (79, 80). 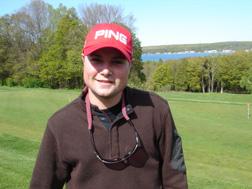 Along with Altrusa of Door County, the Door County Maritime Museum was privileged to be the local non-profit organizations benefitting from this year’s Door County Charities Golf Classic organized and sponsored by Jim Sarkis of Sarkis & Associates Realtors on Monday, June 21. Hosted at The Orchards, the event included former Green Bay Packer Pro-bowlers Ron Kramer and Dave Robinson.

Aces All Over the Place

According to head golf professional, Jason Daubner, Peninsula records approximately 10 hole-one-ones on the 75-yard number eight “cliff hole” each year. If this holds true for this year, the course recently recorded half of its annual quota in just a few short days. Between July 5 – 9, five golfers dialed in the hole and aced number 8. Two of the five hail from Door County, while the other three all have local ties: Eric Conlon, Doug Ferdon, Dawn Anderson, Dan Van Bellinger and Thomas Krause.

Raining Birdies At The Grand Scand 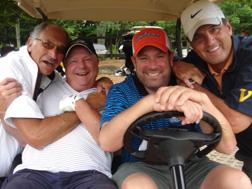 A dark, overcast day mixed with occasional rain and drizzle, greeted golfers at this year’s 15th Annual Grand Scandia held at Peninsula Golf Course Sunday, July 18. The winning foursome from the Men’s Division rained in 14 birdies along with their four pars, for a sizzling score of 57. The seasoned team of three 60-somethings and one fifty-year-old, comprised of Rick Hecker, Tomm Hummel, Bob Spielman, and Richard Brisch. 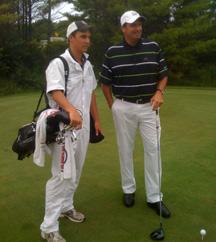 With a score of 74 at the Wisconsin State Open Qualifying Tournament, Pete Mogg, head golf professional of Horseshoe Bay Golf Club, not only came home with medalist honors, but secured a spot in the Wisconsin State Open. Thirty-two players competed for six openings in the qualifying tournament held at Royal St. Patrick’s in Wrightstown on July 29.

A Playoff For the Ages 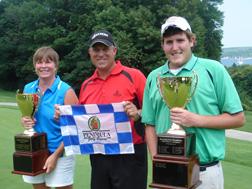 On August 5, Andrew Godfrey from Homewood, IL and also a member of the Western Illinois men’s golf team, captured his third Resorters’ championship in a battle against past champion, Mike Gilliam of Green Bay. To qualify for the championship match, Gilliam beat out Peninsula Golf Course employee Aaron Slaby in what turned out to be the longest play-off in the 86-year history of the tournament.

Gould-Chomeau Taps into Fountain of Youth

Ninety golfers (65 men and 25 women) turned out for the annual Gould-Chomeau Tournament held at Peninsula Golf Course on Sunday, August 1. It was the 33rd year of the event, but the first year in which the tournament raised money for a scholarship fund for Gibraltar High School. It was also the first year in which the minimum age requirement was lowered to 40 (instead of 50).

There’s A Tiger In Our Backyard!

The greatest golfers in the world converged on Wisconsin to compete in the final major of the year. Many Door County golfers scored tickets and were able to take in a day at the PGA Championship at beautiful Whistling Straits. A stunning and controversial ending saw American Dustin Johnson eliminated from playoff hopes, as German Martin Kaymer held on to take home the title.

In the Cherry Hills’ match play tournament that takes over a month to complete, Tim Ullman (10-handicap) came out victorious in the final match against 11 handicap, Todd Huehns (5 and 3). Pat Cuculi (13-handicap) edged out 18-handicap Steve Jacobe (2 up) to take home the consolation honors.

It was a battle of two buddies for this year’s Club Championship at Cherry Hills, August 21 and 22. University of Wisconsin – Green Bay sophomore and Cherry Hills employee Cam Fuller edged out fellow employee and Ferris State sophomore Jared Reid by one stroke in the two day, 36-hole tournament.

A Wet Start To This Year’s Cherryland

A steady rain greeted the 95 golfers on the first day of the 54th annual Cherryland Open, held at Idlewild Golf Course Saturday and Sunday, September 11 and 12. But the rain did not seem to bother the Professional champion, Alex Malachowski from Mt. Prospect, Illinois who finished with two-day scores of 72, 71 (143). The Door County Golf Association sponsors this Pro-Am tournament that awarded prizes in six divisions. 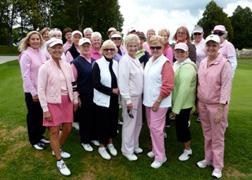 On September 9, 2010 the Bonnie Braes Women’s League held an 18-hole, par three event at Maxwelton Braes to support both Rally for the Cure and DOOR CANcer of Door County. Twenty-three ladies from the league, all decked out in pink, raised nearly $1,000 for these two groups.

Team Max Gets Maxed Out

Jocko Is At Least 34 Years Old

Bob Scofield was this year’s Peoria System winner in 34th Annual Curley Paul/ Jocko Rader Fall Open. With gross scores of 73, there was a tie for medalist honors between John Goettelman and Randy Meyer. A banquet was held at Sturgeon Bay Yacht Club following the event, with over 50 door prizes handed out.

The Great Defenders at The Johnny G

Last year’s defending champions of the 9th annual Johnny G Golf Scramble held Sunday, October 3 at Peninsula Golf Course, held onto to their title for the second year in a row. Two teams came into the clubhouse with scores of 10 under, but the team of Mark Bash, Mike Becker, Dick Brisch and Tony Gonzales beat out the second place team in a scorecard playoff. After playing for eight years at Maxwelton, the event found a new home at Peninsula Golf Course.