History was made for the Door County YMCA swim program on Nov. 13, 2013, when two high school seniors who swam on the Y’s Doorfins swim team signed letters of intent to attend college on swimming scholarships. 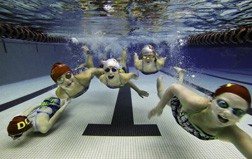 Arica Smith signed to swim for the University of Wisconsin – Milwaukee Panthers and Conner McHugh, a national champion in breaststroke, signed for a very rare full scholarship to swim as a University of Minnesota Gopher.

For two swimmers in the same program to be signed to swim at the college level says much about those individuals, but it also speaks volumes about the coaching staff, which, in this instance, is Coach Mike McHugh, who also happens to be the father of Conner McHugh.

While McHugh is naturally proud of Conner and his other son, 14-year-old Max, who is already swimming competitively at a level several years above his age group, he is equally proud of the entire swim program. 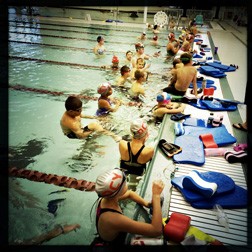 “It’s a value-based program,” he said. “We talk about commitment and honor and honesty and respect and responsibility, and we demand that of them. It’s not just coming out for the sport and making us look good. It’s modeling for the future. It’s working better with people and understanding you have to do that to succeed. I think that’s why we’re getting so many coming. I think the parents value that.”

In his six years as head coach of the Door County YMCA Doorfins swim team, McHugh has seen double-digit growth in the program every year. There were 60 young swimmers in the program when McHugh began as coach; there are about 120 swimmers as the team nears the start of the 2014-15 season, and more are expected because there are several parent informational sessions scheduled before the first meet the weekend of Nov. 8-9.

McHugh will be the first to tell you that he is a taskmaster and that members of the swim team have to be committed to growing as an athlete under his direction.

“Swimming’s not a glory sport,” McHugh said. “We don’t sell it as an easy sport. We sell it as the hardest. It’s the hardest sport you’re ever going to do.” 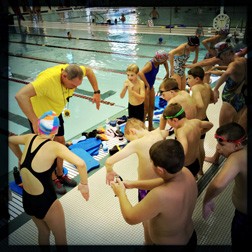 That does not deter the young swimmers. They continue to come and the attrition rate is very low.

“There are a number of reasons why,” McHugh said. “This is much more than swimming. This is life lessons the kids are getting. The kids we have are experiencing success through extremely hard work. It’s not exclusive. We have 5-year-olds through 18-year-olds. One of the best parts of our program is that we swim together. We have the older kids demonstrate strokes. I think that family atmosphere has really helped the program grow. Our success at the national level now has elevated the program quite a bit. And I think the greatest selling point for us is it’s all homegrown.”

“Mike is, I believe, an exceptional coach,” said Tom Beerntsen, executive director of the Door County YMCA. “He’s tough, he’s demanding, but kids respect him and perform for him. You see with the results kids have, from little tykes on up, he has been able to inspire these kids by being demanding, fair and supportive. And I think technically, he is very, very able. He can make the little tiny differences that matter.”

He also points out that 18 Division I and II college scholarships have been earned by Door County Doorfin team members since 2005.

“That is pretty impressive for this little community,” he said.

McHugh, who started swimming competitively in high school, said he and his wife, Mary, who was an All-American swimmer, never pushed their kids into swimming.

“I think genetically Max and Conner are gifted with the swimming ability. It’s not that we pushed them to do it,” he said. “I think they found the same thing all of our swimmers are finding – it’s extremely hard, but they can see they are moving forward. One of the difficulties I have with coaches is saying kids don’t want to work anymore. Well, you know what, come down and watch us. We work immensely hard, from any age up. It’s not a lot of fun in practice. We just work really hard.” 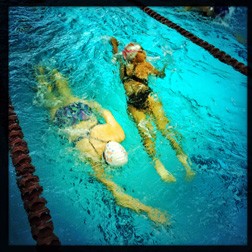 “When we felt our daughter was ready to start swimming competitively, we felt very comfortable handing her over to Mike McHugh because he’s such a talented person when it comes to swimming, but also working with kids. He’s a really interesting and unique fellow and we just adore him,” said Suzanne Rose, whose 12-year-old daughter, Delilah, has been in the Y swim program since she was six-months-old. “I really admire Mike very much and the kids just absolutely are enamored by him. Everything he says, they comply immediately. I’ve seen a lot of coaches in action. He just has a real magical quality about him because he has the perfect ratio of loving kindness and stern leadership. It’s just a really nice combination because it’s what kids need. They need direction, they need someone they trust. But they also need someone who has a sense of humor. He can be really fun. With his tall frame and swimmer’s shoulders, he looks the part, which really makes the difference because kids are very visual. He teaches visually. He shows them the strokes on dry land, and they follow through. It’s because he just exactly knows how to connect with them, which is wonderful.”

“I think the success of our program also is that our parents are a part of it,” McHugh said. “We have parents that volunteer to coach every day. We have so much volunteerism in the program it’s unreal. Parents are expected to be a part of the program. If you don’t tie them in with the importance of being in the program, they’re not going to stay. This community is more involved than I ever thought in watching what is happening.”