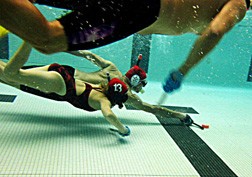 Underwater hockey is gaining popularity at the Sturgeon Bay Y on Friday evenings, where adults and kids, beginners and experts take to the pool to participate in the sport.

It might sound like a fantasy, but underwater hockey is making waves in Sturgeon Bay thanks to Kendall Banks and his family.

“When I met Kendall we were kayaking, and he was wearing an underwater hockey t-shirt, and I thought it was a joke,” said Terry Chier. “I said ‘What’s up with that t-shirt? Is this like underwater basket weaving?’”

But once Chier donned the headgear, snorkel and flippers and jumped into the pool, he saw the reality of the sport. In February a group began meeting on Friday nights at the Sturgeon Bay YMCA to play the unique game, hoping underwater hockey will catch on across the city.

Underwater hockey was first invented in England in 1954 by Alan Blake. He wanted to create a sport for scuba divers to play in the offseason to keep practicing, but the game spread beyond the scuba world. There’s now an annual world championship tournament, with teams from over 20 countries.

The game is played in a pool, with a metal goal on opposite walls. Players wearing flippers use short wooden sticks to push a puck through the water and into the goals. With the right technique, players can get the puck to sail off the bottom of the pool almost like a Frisbee, and glide through the water for 10 to 12 feet. 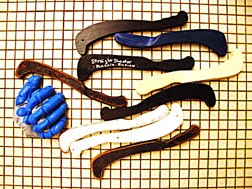 In underwater hockey, players use short sticks to propel a puck across the bottom of a pool.

Then there’s that unmistakable, satisfying “ch-chuck” noise of the puck sliding into the goal. It’s one of the few things players can hear underwater.

Because it’s played entirely under water, underwater hockey isn’t much of a spectator sport. It’s hard to watch the game from the surface, where it just looks like snorkels popping in and out of the water. But under the surface, players wrangle for the puck in watery silence, hoping to flick the puck to goal before coming up for air.

Players wear snorkels, goggles and headgear. They play positions in relation to the puck, so there’s no designated goalie. And because everybody has to take turns breathing, nobody can stick to just one place in the pool.

Banks said the average dive is five to 10 seconds, and stressed that holding your breath for a long time isn’t a great strategy when playing the game. It’s more important to be ready to dive when your teammates need you to push the puck or attend the goal than it is to stay below water for a long time.

“You don’t want to stay down so long that when you come up you have to breathe for a minute,” Banks said.

The Sturgeon Bay group is a mixture of adults and children, experts and beginners. While most have only played the sport for a few months, Banks and his wife Sue have played in world championship tournaments and have gold medals to show for their time in the pool. Their children, 9-year-old Abby and 11-year-old Molly, have been playing since before most kids take off their floaties. 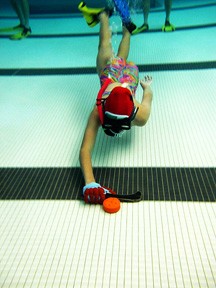 The Banks family helps teach new players the basics of underwater hockey before scrimmages start on Friday nights. While the sport is pretty easy to pick up – Banks said most people can get in a game on their first try – the trickiest part tends to be handling the equipment.

First-time players might get a breath full of water their first few times up for air, but with some practice they learn to control their breathing and play with the team.

“It’s a good time to get involved,” Banks said. “We’re teaching the basic skills every night.”

Chier is a triathlete and plays underwater hockey with his daughter Gale to keep in shape in the winter. He said the sport is good cross training for triathletes and cyclists because it’s fun to play and strengthens your legs.

But others, like Molly Banks, just play for the love of the game.