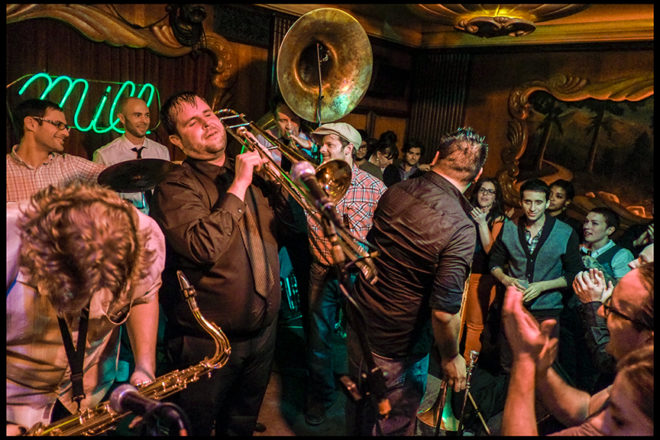 Mama Digdown’s at the Green Mill in Chicago with actor Steve Zahn from Treme. Submitted.

Patrons of the Green Mill Cocktail Lounge clap their hands to the beat as the ensemble of trumpets, trombones, percussion, saxophone and sousaphone make their way through the crowd from the stage to the street. They spill out of the nightclub’s entrance, continuing to play their entrancing rhythms, drawing out a dancing audience behind them.

“Hey-O,” sings their lead vocalist, “are you ready to party?”

This is the type of vivacious performance that ensues when you schedule NOLA-style Mama Digdown’s Brass Band to play at your venue.

The Madison-based band has been performing together for 23 years, and their enthusiasm for the genre and performing live is just as strong as when they started.

Christopher “Roc” Ohly, co-founder of Mama Digdown’s, has been involved in music for the past 35 years, playing what Ohly calls “the standard instruments” of piano, clarinet and recorder in childhood. He picked up the saxophone in high school and played on through college at the University of Wisconsin – Madison. It was in the school’s music major program that Ohly met Erik Jacobson, a sousaphone player who would become the band’s other co-founder.

It was also in college that the duo was introduced to the rich cultural and musical tradition of New Orleans, with its street parades and various genres of jazz. In the early ‘90s, Jacobson became familiar with the Dirty Dozen Brass Band from New Orleans. As a horn player, Jacobson found the genre especially appealing.

“When you’re a guitar player, there are lots of rock bands,” Ohly explained. “When you look at pop, soul, even R&B, you [the horn player] aren’t the front line; you’re in an auxiliary role. As a horn player [in a brass band], you get to be the front line.”

Jacobson and Ohly collected band members from within and beyond Madison’s music program to form Mama Digdown’s. The group is one of the longest-running brass bands in existence outside New Orleans. The band’s unique sound and lively stage presence have provided them the opportunity to play hundreds of venues, including Donna’s Bar & Grill in New Orleans, which Ohly claims was “the brass band Mecca” before it closed in 2010.

The band has released five albums, the most recent being The Southside Aces, Vol. 1, which was released in November of 2015. This year, the band hopes to release an album of Michael Jackson covers. Ohly stated that the project was a long time coming.

“When we started this, it was before he [Jackson] died,” he said. “Then we wanted to get it released by the first anniversary of his death. But we want to get it right, so we’re taking our time.”

The album will include a variety of songs from the King of Pop’s repertoire, including “Bad,” “The Way You Make Me Feel” and “Wanna Be Startin’ Somethin.’” The band hopes to get an EP released this fall after final recording and mixing.

“It’s been a labor of love,” Ohly stated. “We’ve recorded a bunch of songs, and it’s taken us the longest [of all our albums]. People have families, and we’re spread from Minneapolis to Chicago so getting together to record is a challenge. We’re very close this time.”