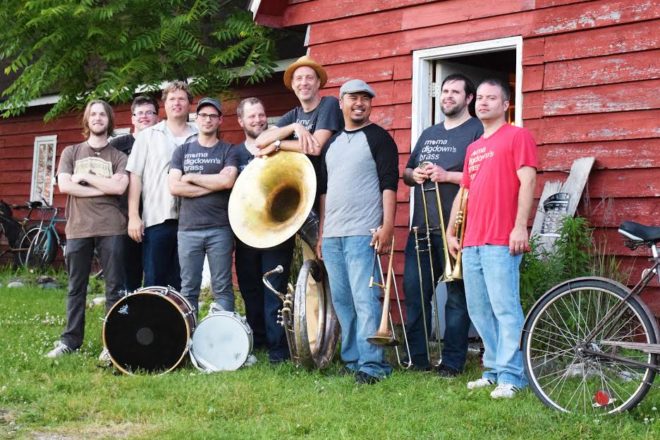 The sound of New Orleans is unmistakable, but it rarely makes its way north. Fortunately, it will march into the peninsula for the 2016 Door County Beer Festival in Baileys Harbor.

Mama Digdown’s Brass Band, called “one of the best brass bands, anywhere,” by New Orleans Jazz legend Bob French, has traveled the world spreading the gospel of New Orleans brass band music. They’ve earned a reputation as one of the tightest and hardest hitting brass bands in the country and will make their way from Madison to Door County for two shows June 18.

First, they’ll bring the brass to the beer festival grounds from 12 – 2 pm, then they’ll play a post-festival party at Door County Brewing Co. at 7 pm.

Mama Digdown’s Brass Band nods respectfully to the past while incorporating current sounds into their musical mix. The band has played hundreds of shows in their time together both in the U.S and Europe. Their sound works its way between classic New Orleans-style street parade music complete with shout choruses and serious jazz influences, to more laidback, hip-hop inspired riffs. Get more details and buy tickets at DoorCountyBeerFestival.com.