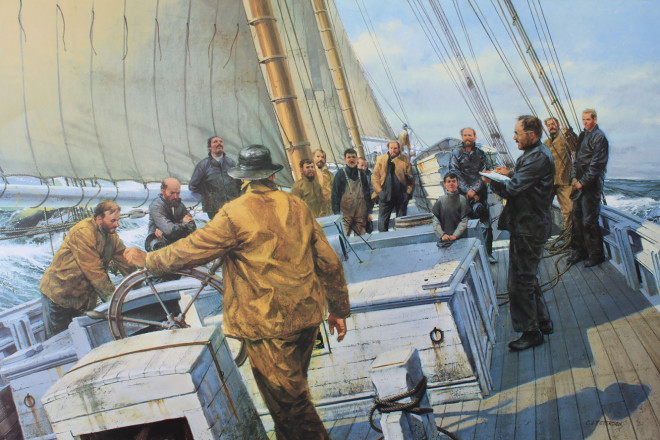 Legendary anchorman Walter Cronkite, a passionate sailor and appreciator of maritime art, said this of artist Charles “Chick” Peterson’s work during an international competition at Mystic Seaport’s Maritime Gallery:  “This man can draw!”

“I thought he had used his power of observation and his power of communication to summarize my whole career in four words,” said Peterson, a longtime Ephraim resident and one of Door County’s most beloved artists, swiveling on a black chair in his home studio.

A countertop is stacked with prints of his life’s works – drawings, oil paintings and watercolors; rows of National Geographic line white shelves; and a simple pencil drawing of two delighted children watching a cowboy saddle a horse rests unfinished on his easel. “I’d always drawn and I’d always drawn horses,” said Peterson, who is also known for his Door County landscape paintings, dramatic nautical paintings and “Memories” paintings that feature translucent, ghost-like individuals of the past against the backdrop of an aged setting, such as an old schoolhouse or barn. 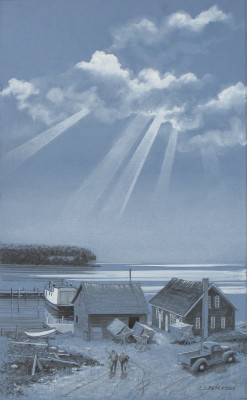 “A Break in the Weather”

“I have become a watercolorist primarily though I am a draftsman first and maybe even finally,” he said.

For more than 80 years, Peterson has drawn, and drawn well. “My brothers were irritated with me,” said Peterson, who grew up in Elgin, Illinois. “If there was a baseball game at the lot across the street, I would go over but give it up and sit on the side and draw pictures. They couldn’t understand how I could do that.”

Peterson never intended to make a living off his art; he didn’t even enroll in a high school art class. “I took all physics, chemistry, math, history and English,” he said, intending to follow in the footsteps of his father and two brothers, who were all engineers. But friends and family noticed Peterson’s talent and strong interest in art. When he was 16, high school friends bought Peterson an oil painting set. “That was how I got started,” he recalled.

From then on Peterson believes his “life is dominated by good fortune, good luck. I happen to be with the right people at the right time, including my mother.”

While Peterson served in the Pacific War, his mother sent drawings to the American Academy of Art in Chicago. “A few years ago, the Academy of Chicago – my first college – did a retrospective of my work. And they had in their files yet, letters from my mother,” Peterson said. “She was sending them drawings I was doing in the Pacific War, particularly a drawing I did of my shipmates the day the Japanese surrendered, which was a big day for us.”

The letters, sent in the late ’40s and kept all these years by a secretary, state:  “My son is an artist. When he comes home he will want more training. Give me a critique of these drawings and send them back to me and put him on your mailing list.”

When Peterson returned from the Navy, he wondered whether he should pursue a career as an engineer like all the other men in his family or, after a particular incident in the Navy, a career in art.

“The Mountains Are Calling And I Must Go”

“I sold a drawing of our ship to a shipmate for five bucks and I heard two days later he sold it to the executive officer for $20,” Peterson said. “So I came home thinking possibly there’s a career in art and here was this information from the American Academy and that’s what I did. And it was the right training for my personality.”

For two and a half years, Peterson spent half the day drawing from a model and the other half learning “all the principles of organization, composition, perspective and so forth,” he said.

After graduation, Peterson worked as a commercial artist, but became “disenchanted.” As fate would have it, he ran into an old friend from his Boy Scout days who was teaching at Marietta College and encouraged him to attend the school:  ‘Come live with my family, finish up the degree, and find out who are you,’ said his friend.

“And that’s what I did. And I loved it,” Peterson said.

So began Peterson’s life in academia.

He went on to receive a Master of Fine Arts in painting from Ohio University and accepted his first teaching job at Concord University in West Virginia. Through twists and turns of fate, he met his wife Susan while spending a summer in Madison, Wisconsin, and ultimately returned to his alma mater as head of the art department.

Peterson’s life in Door County began when he and his wife Sue built a cottage in Ephraim in 1967, where he spent his sabbatical in 1968. “It was wonderful,” he said. “The reaction of people in Ephraim was very encouraging. I was encouraged by [Sturgeon Bay artist] Gerhard Miller because he painted in a style that I understood; he had established and maintained a style which was compatible with my style therefore I felt I could make a living painting here.”

Following his sabbatical, Peterson returned to the college. “The president said, ‘Well Chick, what do think of the sabbatical program?’ And I said, ‘It’s terrific, I’m going to quit teaching.’ He said, ‘You have misconstrued.’” 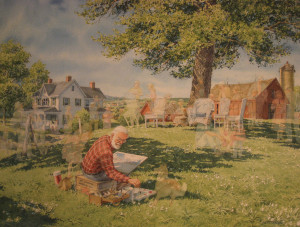 “I enjoyed teaching very much and I wouldn’t have regretted spending my life at it,” Peterson said. “We were dubious that I could afford to give up teaching and just devote myself to painting, but I’m glad that Sue backed me.” In 1973, along with his wife and three daughters, Peterson moved to Ephraim permanently to pursue his art.

“When I moved up here, I told Gerhard Miller that he had been very encouraging to me, that my ideal had been Titian, who had painted late into his late life, he was up in his 90s and still painting. He was losing some of his facilities, but he evolved a new style, which we now call Baroque painting. He’s an absolute genius,” said Peterson. “Gerhard had replaced Titian for me because he lived in Door County, and that’s where I’m living, and it gave me courage to face my own old age. So I said to Gerhard, ‘Even though you are a Norwegian, you are my ideal.’ He loved Scandinavian slurs.”

Peterson’s influences and inspirations also come from working independently. “Winslow Homer painted in isolation, he had a very active early life, he was a commercial illustrator who did magazines and books and painting, but ultimately moved off to Maine and lived in the old family home and continued painting, and painting beautifully out there. He didn’t need connection to galleries or to other artists. He says, ‘Look at nature. Work independently.’ And that’s what I’ve been up to for the last 40 years. I’ve been working independently, paying less and less attention to what’s going on in the art world, but following the dictates of myself.”

The “Memories” paintings for which Peterson is well known are “a good device for me to express the past,” he said. “They remind a lot of people what their life was like and, boy, that is satisfying. They look at those ghostly images and they say, ‘Oh, that reminds me of this or that or this or that,’ and that’s wonderful because I can then believe that I’m enhancing other people’s lives. Ben Franklin says, ‘That’s the reason we are here, to enhance the lives of others.’ 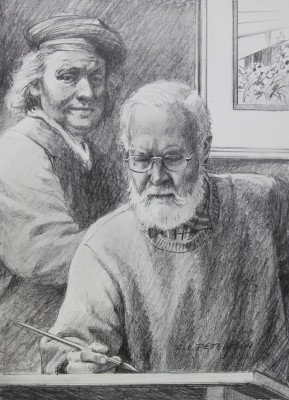 “My life has been lucky,” Peterson said. His artwork received more than enough attention to support his family and attract Mark Quale of White Door Publishing, who became Peterson’s agent. “He took care of everything,” says Peterson. “I could stay home and paint. He would bring in prints for me to sign and it was wonderful. He did all the printing and all the distribution. Everything! He did everything except the painting.”

Soon Peterson was on the top 10 list of artists for U.S. Art magazine, and he remained on the list for several years. He has also been listed among the “Modern Marine Masters” by the Maritime Gallery at Mystic Seaport Museum, where he has won several prizes.

Still, he paints and draws almost every day of the week with National Public Radio sounding in the studio, until 3:00 pm. “The classical music ends at three, so I quit painting and go for a walk and that restores my feeling that I am a part of this, a part of the environment,” said Peterson. “That’s what’s nice about living in a little village like Ephraim – you are closer to nature here.”