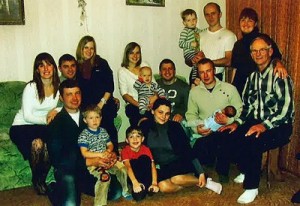 Jeff Weborg with one of the Ukrainian families he has become friends with. This was taken during his last visit there in November 2013.

Jeff Weborg didn’t want to go to Ukraine, even though he was invited to go on a mission through his church. South America, Central America, the Philippines, sure, they need help from church missions.

“But you don’t go to Europe for missions,” Weborg said. “I didn’t understand that. And I didn’t like the language. They speak Russian and Ukrainian.”

But a mission to Ukraine was organized and Weborg of Gills Rock was invited.

“Some people came to our church, said there was an opportunity to go over there, would you like to go,” he said. “I thought, I don’t want to go unless I know that God’s calling me to go. I don’t need to take another trip. I’m traveling all the time.

“So, I don’t know what I was expecting. I wasn’t expecting a voice in the night to go…” and Weborg deepens his voice to say, “‘You should go to the Ukraine.’

“I didn’t expect that,” he said. “God has never spoken to me like that. Not that he can’t. But God used someone else in an interesting situation, showing me very clearly that I should go to Ukraine. But I still didn’t want to go.”

So began the re-education of Jeff Weborg.

“I went, not wanting to go, sort of like Jonah of old. He didn’t want to go to Ninevah and God told him he should go,” Weborg said.

That was 11 years ago. Weborg has been back there 18 times since that first trip in 2003. Now when he arrives in the city of Lebedyn after a five-hour car ride from the airport, Weborg sticks his head out the car window and says “Doma! Doma!” (That’s “home” in Ukrainian.)

He was last there in November, just as tensions between Ukraine and Russia intensified into a global situation that some are now likening to the East-West tensions at its most rabid during the Cold War.

The Ukrainian presidential election was set for 2015, but has been moved to May 25 of this year. At the same time, Soviet forces appear poised to annex Ukraine, as they did Crimea in March.

“I’m hoping to go again in June,” Weborg said. “The elections are in May. I need to see what happens there and if things escalate. I believe God takes care of us and he can protect us anywhere. And I believe if I went to Ukraine, he could protect me. But I also believe that he’s given us a brain and he expects us to use it. For us to walk in harm’s way when there’s not a need to, we need to look at that.”

But Weborg’s connection to the place and its people is obviously real.

During his first trip, the mission was to help the local church organize a day camp.

“Over here we call it Vacation Bible School,” he said.

They did that, and Weborg’s job was a tough one – he had to take the little kids onto the playing field and play with them.

But that was just for a small portion of the day and there was much that could be done. He and his fellow missionaries offered to do whatever was needed. Just tell us what to do, was their motto.

That openness led to acceptance.

“When they saw we were just there to do whatever they needed, it made a big difference to them. They accepted us like family,” Weborg said. “At the end of 10 days I stood in a parking lot with my pastor from Ukraine, both of us crying, and I told Nikolai, ‘I don’t want tomorrow to come because I must leave and I don’t want to leave.’ It was very difficult. We had a farewell meeting with the church, and I said two things, ‘If I have offended you, please forgive me. I did not mean to. I just did not know any better. And two, I want you to know that I’m going back to America, but some of my heart will remain here in Ukraine.’

Besides earning the acceptance and love of the people he has come to know, Weborg said two experiences will always remain with him.

The first was when the pastor of the church invited Weborg to see where he had worshiped during the Soviet era. The pastor took Weborg for a walk into the woods. They stopped in a clearing and the pastor said, “Here was my church.” Weborg looked around for a foundation and not seeing one, said, “Where’s the foundation?”

No, he was told, the clearing in the forest was the church. Winter. Summer. It was an underground church when religion was outlawed by the Soviets.

“When I walked out in the forest with my pastor, it gave me a whole new appreciation for what we have in America,” Weborg said. “We don’t have to worship in secret, yet.”

The second moment that opened his heart was during the first visit when he saw a monument to the 1932-33 famine, or what is known as Holodomor or “death by famine.”

“I didn’t ask too much the first time,” he said.

But on his second visit he asked and learned of the Stalin-instigated genocide of Ukraine through starvation. He spoke with Pastor Nikolai’s mother, who was six at the time and who remembered horrific details of bloated bodies and true tales of cannibalism.

“Virtually everybody in America has heard about the Holocaust. It was horrible and I don’t mean to dismiss that at all, but we don’t know anything about the ’32-’33 famine in Ukraine,” Weborg said. “Stalin starved them to death. He didn’t starve six million. He starved in excess of 10 million people in Ukraine.” [Most sources say 7 million, but does that make it any less horrific?]

In addition to learning these things, he saw the poverty and political corruption of the place and felt deeply for the people and their culture.

“I stay in their homes. The youth that were young when I first started going there, now they’re getting married and having children,” he said.

Weborg said the first five or six years of his visits, he would repeat the mantra to the people, “Please forgive me if I have offended you…” Until they finally said to him, “Jeff, it’s OK. You don’t need to say that.”

He said, “I don’t know all your customs yet. I’m worried about that.” And they said, “We know you don’t mean to offend. We know that you care.”

“What a simple thing,” Weborg said.

Asked what we can do, Weborg said, “Pray for Ukraine. They need our prayers. If somebody wants to give something to them, I would take it over to them. I don’t have any tax deductible type thing, but I would take it.”