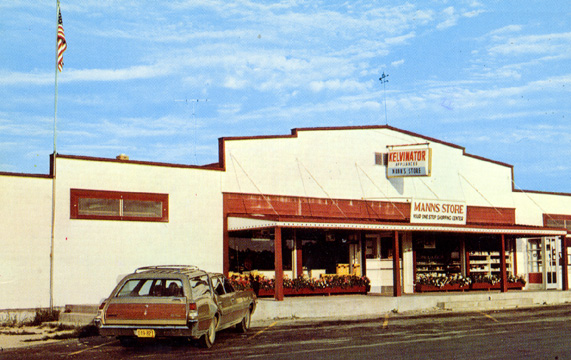 Mann’s Store in its earlier days. Photo courtesy of the Washington Island Archives.

There are likely a number of isolated areas in the country that have access to just one grocery store, but it’s not likely that anywhere else can match Washington Island’s record of having the same store for 117 years, run by five generations of the same family.

In 1902, 21-year-old George O. Mann went to Washington Island to teach at the East Side School. He’d graduated from eighth grade in Baileys Harbor and had previously taught there and in Brussels. He boarded at the home of Peter Hansen.

The following year, Mann established Mann’s Store on Main Road. It was a two-story building (with an elevator!), but unlike many stores of that era, the upstairs was not the family residence. Instead, it was an extension of the store’s retail space. Because it was the only store in town, it stocked merchandise that was not always found in a grocery: shoes, rifles, milk cans, clothing, hardware, fishing supplies, furniture and … coffins.

Mann’s slogan was, “The store where you can always get it.” A born entrepreneur, he had salespeople on the road from Gills Rock to Racine, taking orders for twine, lumber and millwork such as window and door frames.

A look at Mann family history suggests that George probably inherited his love of buying and selling. The first newspaper mention of the family in Door County was in a Jan. 18, 1883, column by an Ellison Bay reporter, who noted that Charles Mann, George’s father, was in Door County buying logs from John Ellison for the Two Rivers Manufacturing Company.

George bought vegetables and grain from local farmers and sent what he didn’t need in the store on ships that were heading down to Chicago. During the winter, a horse and sleigh took extra butter and eggs across the frozen bay to Escanaba, returning with groceries. Mann’s delivered orders twice a week to all parts of the island, and an ice route served about 100 customers – vital services in the day when roads were poor and very few people owned cars.

In a history of the store written by Jerome Mann, one of George’s grandsons, he recalled that among the early employees were Sigirid Gudmender, Carrie Jorgenson, Mac Magnusson, Milton Cornell, Gus Anderson, Lester Nelson, Thelma Fons, Muriel Gunnlaugson, Arbutus Greenfeldt, Sarah Magnusson and Lillie Johnson (who worked at Mann’s for 23 years).

“I think everyone in Burnt Gunnlaugson’s family worked for us,” Jerome wrote, “and Pete Jensen’s boys – Harvey, Ed, Myron and Wallace – all worked on the farm.” That would be the old Mann farm near Jackson Harbor, where cattle were raised and much of the produce that was sold in the store was grown.

On April 11, 1932, a fire started in the “light plant room” of the store and spread throughout the building. Fortunately, it spread so slowly that employees and volunteers were able to carry all the merchandise to Karly’s Dance Hall across the street, laying it out on tables. Big items such as rolls of linoleum were leaned against the walls, and Mann’s never closed, even for a day. Business was conducted in the dance hall until a new, one-story store could be erected on the original site.

Fred Dillon, who was married to George’s daughter, Hazel, ran a new garage next to the store.

Jerome started working for his grandfather when he was 13. He was responsible for having the store completely swept before 7 am, when George arrived to open for the day. When he was old enough to drive, Jerome became Mann’s delivery boy, making the rounds with lumber, feed, gas and kerosene; and picking up at least 100 dozen eggs along the way.

George celebrated the store’s 50th anniversary in 1953 and continued to be in charge until his death three years later. His son, Fred; and Fred’s wife, Lettie, took over then and ran the business until Fred died in 1963. Management then passed to their son, Jerome; and his wife, LeVaun.

“I was very lucky,” Jerome wrote, “to have LeVaun and our children – Jerry, Bonnie, Orion and Keith – to help in the store to keep operating expenses down.”

Under Fred’s management, many changes were made. A store engineer from the S.C. Shannon Company helped the family to remodel the store, making more room for merchandise, and he also supplied an accountant.

The lumberyard that had been part of the store was turned into a True Value hardware store, with Keith as its manager. When it outgrew the space, Keith built Mann’s Mercantile down the road in 1983, and the grocery’s former hardware section became the deli that’s home to the family’s popular specialties.

When Jerome died in 1992, sons Jerry and Orion stepped up to take over with help from their wives, Marlene and Jill. Like his dad, Jerry got an early start in the grocery business as a preschooler, riding along with Jerome on deliveries, fortified by Grandma Lettie’s homemade doughnuts. He recalls how happy people were to see the delivery truck pull up to their house and that he was often given cookies.

Jerry was still a young boy in the late 1960s when the first flat-top boat began delivering goods to the island, making it possible for trucks to drive directly to the store, rather than unloading and reloading at the ferry dock.

When some of the store’s major food suppliers went out of business in the ’60s, Mann’s experienced a rough time, but it survived as it had during the Great Depression three decades earlier. The family extended credit to a lot of island families during the 1930s, and Jerry remembers that many people said they wouldn’t have made it through without the Manns’ help.

Another challenge arose one January in the late 1960s when the ferry broke down and the store went for 17 days without receiving supplies.

“We went in snowmobiles to pick up what we could,” Jerry said, “and a Coast Guard cutter brought some things to us. It was a pretty unique situation. We have a big responsibility to have enough of everything that people want, given that we get only two deliveries a week.

“In the off-season, our truck meets the grocery truck at Northport, and they swap pallets between the two. In the summer, when we’re busiest, our grocery distributor brings the delivery right to our back door. If the ferry doesn’t run, we have to improvise a little. Our customers depend on us. Some of them are in the store three times a day, before every meal, although I think in some cases, it’s just to visit.”

It’s not unusual for a wedding invitation to be posted on the store’s bulletin board because the person posting it is certain that everyone will see it and know they’re all welcome to attend.

Jerome’s widow, LeVaun, continued to go to the store to stock shelves until she was in her late eighties. Now 94, she’s a resident of Scandia Village in Sister Bay. Jerry and Orion represent the fourth generation of Manns to run the family store.

Jerry’s son, Jeffrey, is a full-time employee; and his children, the sixth generation of Manns, help out on weekends. Orion’s children, Alissa and Joshua, as well as other grandchildren, have spent summers working in the store.

In three years, the store will celebrate its 120th anniversary, and with 13 grandchildren and more great-grands, there will be no shortage of Manns to take it to the next generation.