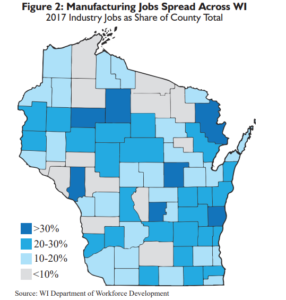 Although its share of Wisconsin’s overall economy has declined in recent years, manufacturing continues to have an outsize impact on the state’s workforce, wages, exports and gross domestic product, according to a new report by the nonpartisan, independent Wisconsin Policy Forum (WPF).

The latest issue of The Wisconsin Taxpayer, “Assembling Jobs,” aims to provide context for the ongoing debate about the role of manufacturing in the state’s economy as well as to examine state incentives and tax policy aimed at encouraging the industry.

Still, the decline in manufacturing jobs in Wisconsin has been smaller than in the nation as a whole or in Illinois, Ohio and Michigan.

The report also examines the tax exemptions and incentives Wisconsin provides manufacturing businesses and compares them to six other Upper Midwest states. WPF researchers found many of these tax incentives are comparable. Wisconsin manufacturers “receive a larger portion of state incentives than their share of state GDP might predict, but in return they also pledge more jobs than other award recipients,” the report notes.

For example, roughly half of the $148.4 million in tax credits, grants, loans, and other incentives awarded by the Wisconsin Economic Development Corporation (WEDC) in 2016 went to manufacturers, WPF researchers found. But manufacturers “made an outsized contribution to the total capital investment and job creation and retention pledges secured by WEDC’s 2016 awards, providing more than three out of the five jobs pledged even though they accounted for half of the total awards.”

Overall, the report calculates Wisconsin state support for manufacturing, including tax exemptions, incentives, and other aids, totaled $928.1 million in 2016, the last year for which complete figures are available. After adjusting for inflation, that figure was 28.1 percent higher than in 2008. This amount could rise by hundreds of millions of dollars to reflect the phase-in of the manufacturing and agriculture tax credit and incentives promised to the Foxconn Technology Corp.’s plant in Racine County. The Foxconn incentives, which have been projected to cost more than $2.85 billion, are contingent on its hiring of more than 13,000 workers and investing $10 billion in its facility.

The report suggests policymakers may want to consider several factors in weighing current and future incentives to manufacturers, including:

“Balancing these complex and often competing questions is not just an economic exercise – it has been and will likely continue to be a political question. Manufacturing has played and will continue to play an important part in Wisconsin’s economy, ensuring the state will grapple with how to foster the industry for years to come,” the report concludes. The full report can be found at wispolicyforum.org.