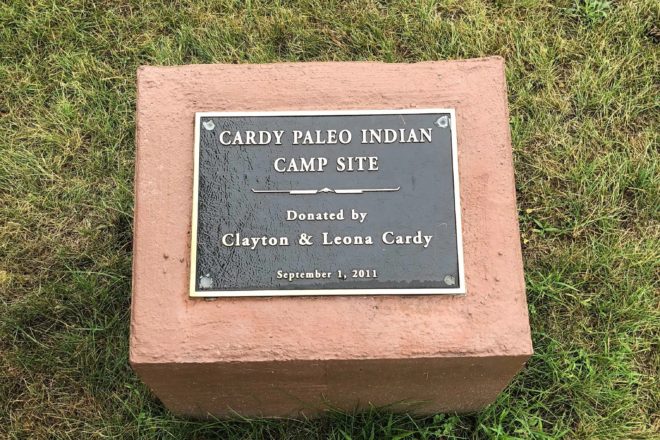 On Saturday, Aug. 18, people interested in prehistoric life in Door County will have two opportunities to see and hear about it from the man who first discovered this local link to a culture thousands of years older than Egypt’s pyramids.

Darrel Cardy was born in Sturgeon Bay and raised on the property now known as the Cardy Paleo Indian Campsite at 322 W. Spruce St. on the city’s west side. In 1959, while attending University of Wisconsin – Madison, he took a course in prehistoric anthropology and observed that the stone tools from a Clovis, New Mexico, site illustrated in the class textbook were very similar to some chipped stone tools found on his family farm.

He took the tools to Madison for confirmation, but was told that it was impossible for tools that old to have been found anywhere near Sturgeon Bay. However, later studies by archeologists from Marquette University and other institutions showed conclusively that Cardy’s observations had been correct and that the tools in his collection were, indeed, of a similar age, circa 10,600 years, to those from Clovis.

At the Door County Historical Museum

Now Cardy had donated to the Door County Historical Museum the Cardy Site Collection of Paleo Indian stone tools, including fluted spear points, end scrapers, flake tools and various other artifacts that are distinctly different from and much older than the stone tools used by the Native Americans who were encountered by the earliest European explorers. The collection will be a permanent exhibit, enhanced by a new painting by Mike Orthober that shows the inhabitants of the Cardy Campsite as they might have looked living very near the edge of the retreating glaciers that once covered this area.

Cardy will be at the museum to answer questions for the grand opening of the exhibit from 10 am to noon on the 18th.

The museum, located at the corner of Michigan and North 4th Ave. in Sturgeon Bay, is open from 10 am to 4:30 pm daily, May 1 to Oct. 31. Admission is free, but donations to benefit exhibits and programming are welcome. For more information, call 920.743.5809 or email [email protected].

At the Collins Learning Center at Crossroads at Big Creek

At 1 pm on the 18th, the Door County Historical Society will present a talk by Darrel Cardy as part of its Saturday Yesteryear Series at the Collins Learning Center, 2042 Michigan St., adjacent to the society’s Heritage Village.

For 140 years, four generations of the Cardy family collected artifacts dating back to 9,000 B.C. from their garden and surrounding areas, but it was not until 2003 that Cardy’s early observations were proved to be accurate. The items were part of the Clovis culture – part of the lives of hunter-gatherers who co-existed with mammoths, muskoxen and caribou.

Cardy’s presentation will answer such inquiries as:  What was the Clovis culture? Where did these people come from? What attracted these hunter-gatherers to the Door Peninsula? What did Door County look like at that time? Who replaced the Paleo Indians?

In 2009, the Cardy Site was registered as a Wisconsin Historic Site, and the following year, it was designated as a national archaeological landmark by the National Park Service and was also placed on the National Register of Historic Places. Some researchers have called it the most important Paleo Indian site in Wisconsin

There is no admission fee for the program, but a freewill offering will be taken to support maintenance of Heritage Village. The village is open for self-guided tours prior to Cardy’s presentation, beginning at 10 am, and after the presentation until 3 pm. Adult admission is $6.50. A donation is requested in lieu of an admission fee for children.