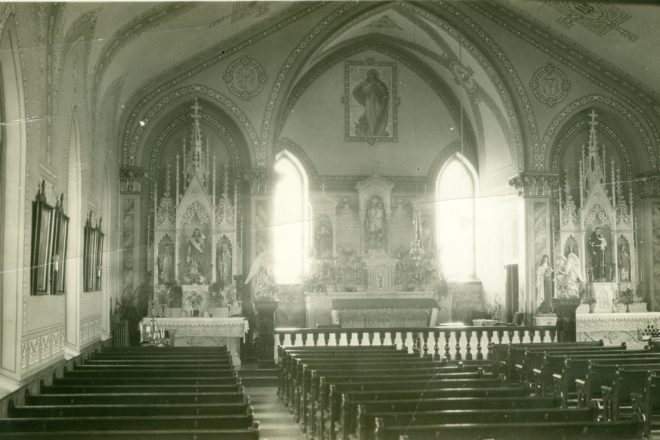 The interior of the church, circa 1931. Courtesy of the Diocese of Green Bay Archives.

Churches are as familiar a part of the landscape as farms in Wisconsin, standing as brick-and-mortar proof of a community’s faith. A church tells the world, this is a community.

But how does that happen? How does the physical church come to be?

Thanks to the archivists of the Green Bay Diocese and the meticulous record-keeping of the 160-year-old congregation, we can see how the philanthropy of the community built the Holy Name of Mary Catholic Church, sitting majestically atop the hill on County H in Maplewood.

The recorded history of the congregation in the diocesan archives is titled:

It begins with a paragraph translated from Latin, written Nov. 14, 1880:  “A new church erected out of wood to the honor of the Most Holy Name of Blessed Mary, ever Virgin was blessed by me, Adalbert Cipin, priest, the facility having been given by the Most Rev. Bishop Francis H. Krautbauer. It was blessed by the prescribed order in the Roman Ritual.”

Father Cipin refers to the first church, which was located a little more than two miles from the present church, midway between the villages of Forestville and Maplewood. 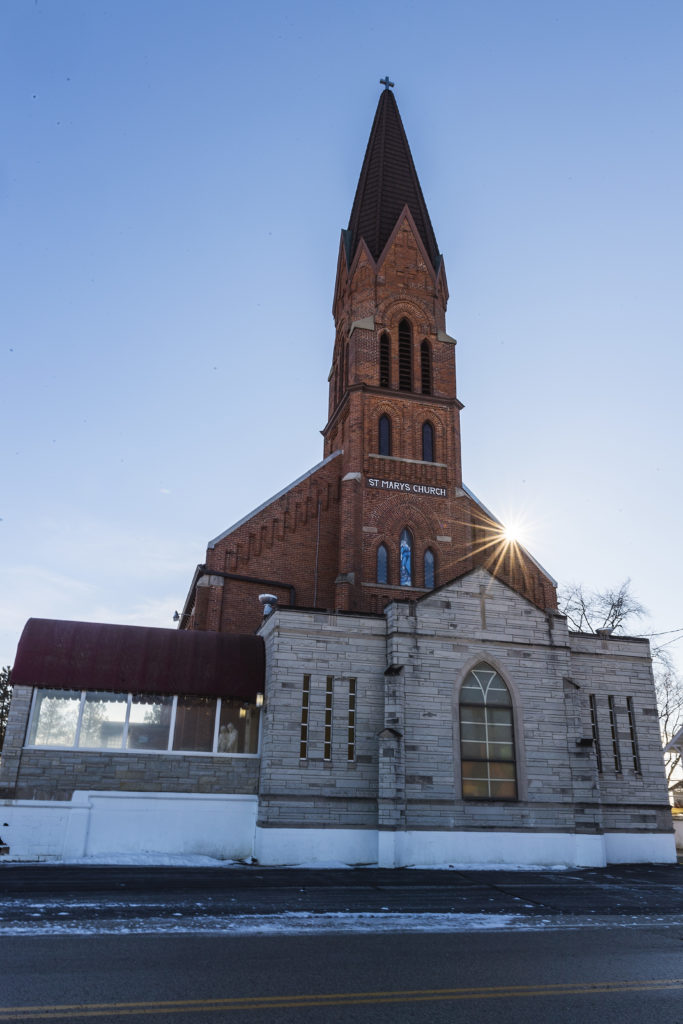 It wasn’t until 1874 when the Rev. Joseph Rohde of Ahnapee advised the Forestville congregation to build a church. Rohde himself designed the church and the frame went up in the spring of 1875, and then stood unfinished for two years until a Rev. Hellwenger organized a fair in November 1877 that raised a profit of $120 for the church, and the pace picked up again, resulting in the November 1880 blessing.

The wooden church with a tin steeple served its purpose, but the area prospered and more people settled there. The congregation quickly outgrew the old wooden church, and people were getting upset that they paid to rent a pew yet had to stand up at the first-come, first-seated services.

At the annual meeting of January 1899, a three-man committee was formed to collect signatures from congregation members regarding their choice for a new church — build on the same location or move to what was known as Zettel’s Corner — Joseph Zettel had donated to the church four acres at the top of the hill in Maplewood.

There was much debate and consternation stirred up in deciding the location, but the final decision was up to Bishop Sebastian Messmer. Unbeknownst to the congregation, Father William Kraemer, the Algoma-based priest who had been ministering to the congregation, wrote a lengthy letter to the Bishop, which included a line asking that it remain secret, in full-throated favor of the Maplewood location. The Bishop concurred.

Once the site had been determined for both a church and parsonage, donations and pledges began rolling in. Sixty-nine donors are identified in the archival documents, but it is stated that there were more donors noted in other books that have been lost to time.

But the existing list shows just what a struggle it must have been to raise the funds for a new church and home for a full-time pastor. The largest pledge noted is $25, and that sum is made by just nine of the 69 — Ferd Babler, Anton Brey, Nick Goetz, Jos. Goetz, Henry Gier, Luke Keogh, George Simmet, Wolfgang Stauber and Joseph Zettel. The rest of the listed donations range from $5 to $24.

The congregation set their sights on building the church in 1901. Architect W.E. Reynolds of Green Bay was hired for $350 (Architect Reynolds also paid for gilding of the large cross that went up in the church tower). Two contractors — a carpenter and a mason from Appleton — were hired to build the church at a cost of $4,247.

At two separate meetings that year, church directors decided to borrow a total of $2,000 from the Catholic Knights in order to keep pace with expenses.

On July 2, 1901, which at that time was the Feast of the Blessed Virgin Mary (after 1969 the feast was recognized on May 31), the cornerstone of the church was placed. An Appleton stonecutter made the cornerstone at a cost of $12, which was paid for by the children of the congregation — 51 boys and 55 girls contributed anything from a nickel to a quarter. Each child is named, age listed and amount contributed:  Peter Brey, 12, 25 cents; Marg. Faken, 3, 10 cents.

Father Joseph Hemmer, the first resident pastor, tells the rest of the history. He traveled to three Chicago stained glass workshops and “finally concluded a bargain with a company to furnish stained glass for the entire church at a cost of $600.”

“I began to take up special donations for this windows,” Fr. Hemmer writes. “All were finally donated except one, which late in the fall was also donated by Ferd Babler Sr.”

Hemmer also notes that during the winter he went around to the congregation soliciting more church donations. “Most people gave notes for two years,” he wrote.

On July 11, 1901, the first carload of brick arrived from Sturgeon Bay and the mason commenced bricklaying. The stained glass arrived on Oct. 10 and was installed Oct. 14. Sim. Franta donated $300 for a new bell. The 1,023-pound G-toned bell from the Stuckstede Bell Foundry of St. Louis arrived by boat and team on Oct. 22.

On Dec. 17, 1901, the new church was dedicated, with services presented in Latin, English and German. Total cost of the church, including two hot air furnaces, came to $8,376.25, which in 2018 dollars amounts to almost a quarter-million dollars.