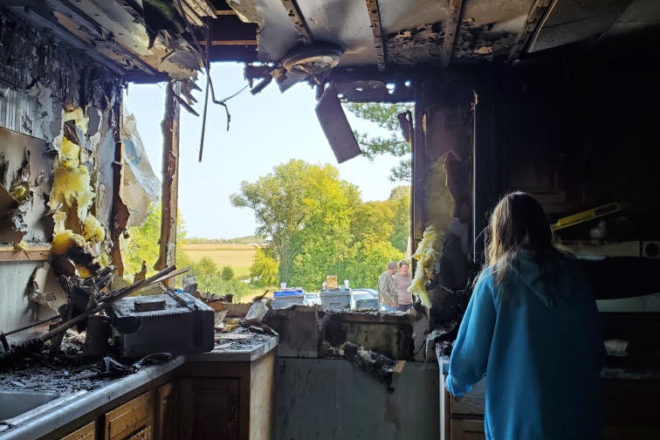 Tracy Starr stands in her family’s ruined kitchen after the Sept. 21 fire that destroyed the Maplewood house. The structure will be rebuilt. Contributed photo.

A fire at the Starr family’s home in Maplewood – an unincorporated community within the Town of Forestville – claimed the lives of two dogs and three cats on the morning of Sept. 21.

The Southern Door Fire Department (SDFD) was paged to the scene at 8:40 am. When the responders arrived, the passerby who had called 911 was using a garden hose to knock down small flames at a corner of the house, said SDFD Chief Gary Vandertie.

Inside, the fire was concentrated in the kitchen area around the stove.

“It didn’t look like anything was cooking on the stove, so we’re not sure what caused it,” Vandertie said.

The home’s windows were closed, robbing the flames of the fresh air that could have fueled their spread. Firefighters doused the fire using only a couple thousand gallons of water.

“We were fortunate that the crews that made entry hit it quickly,” Vandertie said.

The fire killed the animals, smoke-damaged all the clothing and personal belongings on the second floor, and wiped out everything on the first floor. The structure remained standing, however, and can be rebuilt.

“They are just going to gut everything on the inside,” said homeowner Joey Starr. “The outside walls will stay.”

The family expects to be displaced for up to nine months and, in the meantime, is staying with relatives nearby and using a detached garage behind the house.

Starr, 41, grew up in the house before buying it from his mother to raise his own family – Logan Olsen, 15; and Haily Starr, 11 – with his wife, Tracy.

Rachel Lustilla, Joey’s sister, also grew up in the 65-year-old home. As a first responder, she got the page the morning of the fire.

“I was worried about those dogs right away,” she said. “I knew no one was there. They loved their dogs.”

Four other dogs were in the garage and escaped unharmed.

Joey Starr said he and his family are moving forward with the help of family, friends and neighbors who have donated personal belongings. His daughter, who likes horses and lost all her stuffed animals, had a birthday the day after the fire.

“She didn’t have a very good birthday,” Starr said.

“We are all so very thankful for all the support and donations that have been given so far,” Lustilla said. “The individuals in this community are amazing.”

The SDFD serves the Towns of Clay Banks, Forestville, Nasewaupee and the Village of Forestville. Area departments provided mutual aid at the scene, as did members of the Door County Sheriff’s Office and Door County Emergency Services.