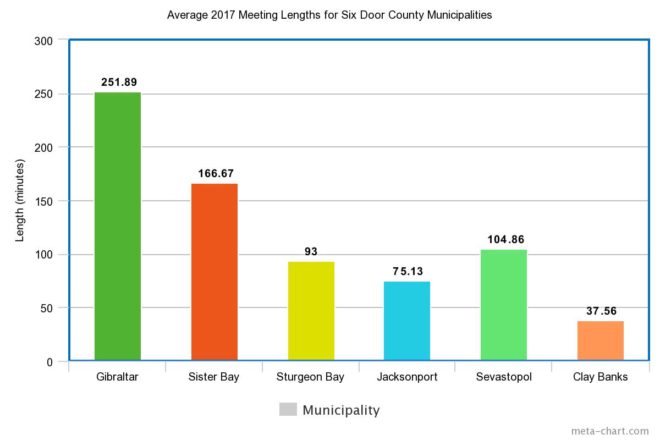 Gibraltar’s town board was preparing to discuss details of its upcoming highway reconstruction on Oct. 4 when board member Steve Sohns commented on the length of town discussions.

“That was too much the other night,” said Sohns, referencing the Sept. 19 meeting with Andrew Dane from the planning firm Short Elliott Hendrickson (SEH). “You can’t keep comprehending that many hours of trying to move on from one thing to the other.”

Such long meetings are not uncommon for the Gibraltar Town Board.

A municipal meeting expert with UW-Extension called the length “extraordinary.”

“I’m proud of that fact,” said town board member Brian Hackbarth. “At those meetings, we are discussing everything out in the open in public like we’re supposed to be. We’re taking great care with our decision making, watching out for taxpayer dollars.”

In addition to its regular town board meetings, the town has called an additional 24 special meetings of the board in 2017. In 2016, the board met 38 additional times.

Town chair Dick Skare didn’t comment on meeting lengths, saying “the board wants to be involved in these decisions.”

Hackbarth attributed the meeting lengths to the multitude of issues on the town’s plate of late.

“A lot of these things are happening right now,” said Hackbarth. “It’s been a busy couple of years in Gibraltar.”

It makes sense that meeting lengths would increase during consideration of large projects such as the highway resurface coming to Gibraltar in 2019, but it is not the norm. The Sister Bay village board meetings during the bulk of highway reconstruction plans in 2014 were shorter (17 percent) than they are today. The average meeting length in Sister Bay in 2017 is two hours and 26 minutes.

An increase in meeting lengths of the Sturgeon Bay Common Council in the winter of 2014-15 can largely be attributed to public comment periods as the first depictions of the west side hotel surfaced, but meeting lengths rarely went more than two hours and still hovered between 30 minutes to an hour. 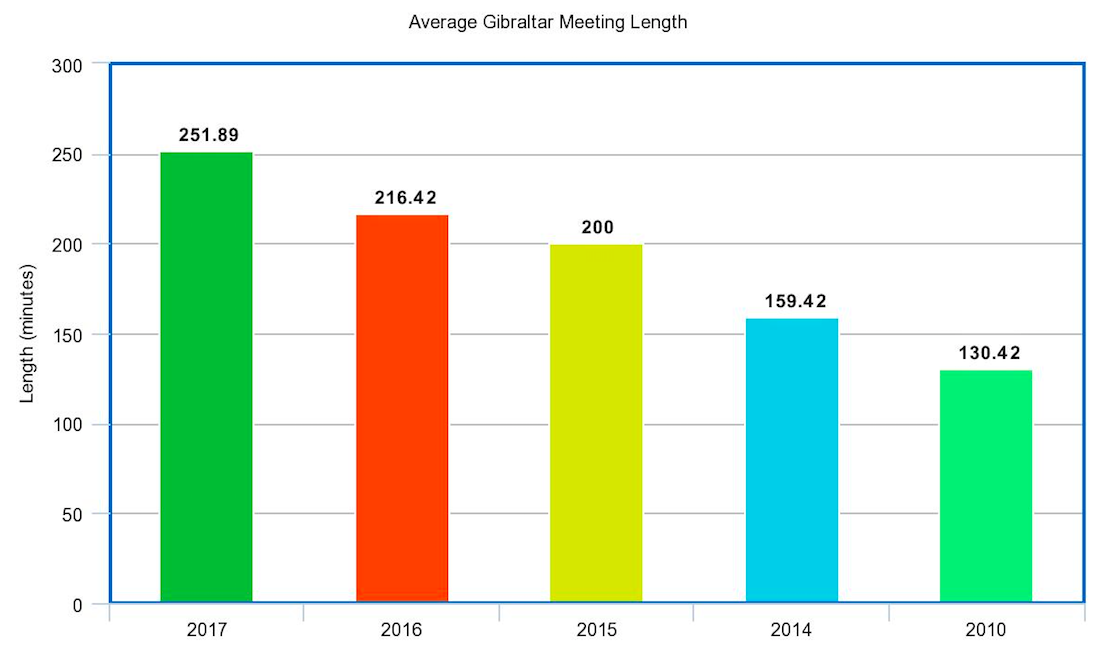 “Committees are … able to be set up, changed and dissolved just as fast as your town or village board can hold a meeting,” wrote former Wisconsin Towns Association attorney Lee Turonie in 2010. “This makes committees decidedly short-term enterprises best for tasks of a limited duration.”

Sister Bay set up an ad hoc committee to manage its highway reconstruction. The committee was made up of two village board members, other village commission members, and representatives from the business and residential community.

Sister Bay village president Dave Lienau said the purpose of the group was to relieve the entire board of discussion over small aspects of the reconstruction.

“We figured out quickly it was going to be an immense and time-consuming project,” said Lienau. “Having a committee that could focus on just those items on a weekly basis was a great thing to do because it could keep the rest of us informed but they could move forward with things.”

The committee was given authority to deal directly with the Department of Transportation (DOT) and the village’s consultant, though expenditures had to go through the village board.

Agenda items for the Sister Bay committee included color of the crosswalks across the highway, the style of rock chosen for the retaining wall on the hill entering downtown and initial legwork on property acquisition. Gibraltar has taken up each of these issues for the first time at the town board level, where discussion pertaining to the highway and streetscape project takes up the majority of the four-plus hour meetings.

“It’s more efficient for the town to just work with our consultant,” said Hackbarth. “The town board is definitely not micromanaging in any way in my opinion.”

For streetscape projects outside the scope of the highway, the town has brought some projects straight to the board without a committee recommendation.

In redeveloping the new Fish Creek Beach property, the Feb. 17, 2017 Parks and Lands Committee meeting minutes explain, “The Town Board will most likely spearhead the project but would like a recommendation from the committee.” The committee did not make a formal recommendation for any aspects of the beach property and the topic has since been under the jurisdiction of the town board.

“We’re trying to coordinate a lot of this stuff with the highway project,” said Hackbarth. “Instead of having three different uncoordinated subcommittees trying to do this stuff, it made more sense for us to look at what is being done together.”

Redevelopment of Sunset Beach and the boat trailer parking lot were also taken out of committee to be discussed at the town board level without a formal recommendation by the committee.

The town board has contracted with SEH for approximately $120,000 for the town beach designs, wayfinding, parking, lighting and sidewalk designs. SEH will present a plan containing these aspects of the streetscape project to the town board, which will then serve as the guiding document for future projects in the town and the highway project beginning in spring 2019.