This “enough already” winter, with its excess of snow and cold weather is also finally bringing with it a few welcome surprises. It was on the afternoon of Saturday, March 15, that Char and I went leisurely looking for things to photograph.

One item we had seen a week earlier was a large two-foot-thick block of incredibly rich blue ice along the edge of the Ephraim harbor. It immediately reminded me of Emma Toft mentioning years ago about their having to put up ice for summer use. She made it quite clear that they always tried to get only blue ice because it was so solid and clear and lasted the best during storage in their ice house. 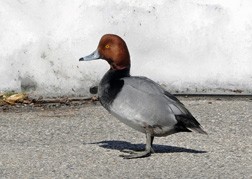 One of the beautiful diving ducks, this Redhead is more at home on the water than on land.

We checked out Cave Point because we had heard that quite a bit of the ice had moved out and hopefully there would be many waterfowl near the shore. Only two Long-tailed Ducks along with some Greater Scaup farther out were present so we decided to head home. Our roughly 900-foot-long driveway leads to a large black-topped turn-around between the garage and house, complete with a few small puddles of melt-water and some patches of thin ice. There, much to our welcome surprise, sat a drake Redhead Duck appearing to be in very good health. Fortunately the wild duck was tolerant enough to allow me to take several pictures with a long lens before it flew through the south woods and hopefully away toward open water.

What’s interesting is that our place is midway between lake and bay, about four-and-a-half miles from each. All we could deduce was that the duck, flying over a solid expanse of white snow, suddenly came to the dark turn-around and may have thought it was water. One can only wonder how many hundreds of times this has happened throughout Northern Door within the past few weeks with there being so little open water for the diving ducks to find food. Spring and the disappearance of snow and ice may bring some unfortunate findings of hundreds of dead waterfowl along the shore.

Many people thus far have reported Robins. They migrate southward no farther than they have to, and it’s not uncommon for a few to find plentiful wild berries and remain here all winter. We fear for the Bluebird numbers this year due to bad ice storms to the south this past winter, making it virtually impossible for these birds to find food. We’re assuming many have starved. 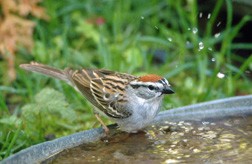 Both mandibles (the beak) on the Chipping Sparrow are black.

Red-winged Blackbirds are also included in this early group, often seen here between March 1-10, along with the Common Grackle, Eastern Meadowlark and Brown-headed Cowbird.

Diving ducks including Redheads, Greater Scaup and Long-tails, which may or may not have been here all winter, are usually gone by around mid-May or sooner.

American Tree Sparrows which have been quite abundant at feeders this winter are gone by early May, around the time that Chipping Sparrows arrive. One has to be careful in telling these two species apart. You can’t always go by the Tree Sparrow’s little black “stick-pin” patch of feathers in the middle of its chest because some lack this field mark. Study the beak of the bird. If the lower mandible is yellow, it’s a Tree Sparrow, and if both mandibles are black it’s a Chipping Sparrow. 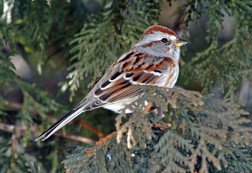 Look for the yellow lower mandible on the American Tree Sparrow.

Now that some of the fields are beginning to open up, be on the lookout for Snow Buntings moving through. Our last recordings of them extend into the first week of April, around the time that another nester of the Far North is also moving through our area, the Fox Sparrow. Often seen at the same time as the Fox Sparrow is the White-throated Sparrow, another northern nester. However, do some birding this late spring into summer at, for example the Toft Point State Natural Area and its neighbor to the west, the Ridges Sanctuary, and you’ll be pleased to hear them and learn that they do nest in these areas.

Even though many birders feel that warbler time is a long way off, consider the Yellow-rumped Warbler that is commonly reported by very late March into mid-April. Slightly later, from April 20-30, is the Palm Warbler, also one of the last warblers to be seen here in fall. Add the Black-and White Warbler to the early list, often reported between April 16 and the first week of May.

A few Killdeer have been reported, frequently in past years seen during the last two weeks of March. As soon as puddles begin forming from the melting snow expect to see the Killdeer. Their sightings overlap the arrival of the American Woodcock, not nearly seen as often as heard. Their welcome “peenting” ranks high on the list of favorite spring bird sounds. Go out day after day, as soon as the days warm into the 50s and most of the snow has melted, around a half-hour before the sun sets and begin listening for their easily identified “singing.” 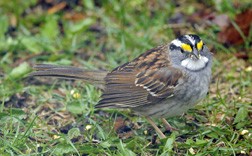 Get to know the plumage of the White-throated Sparrow. The yellow eyebrow patch above the eye is a good field mark.

Several dependable bird arrivals from late March into early April include the Belted Kingfisher, Yellow-bellied Sapsucker, Common Flicker and the Eastern Phoebe. A great favorite of many people, including us, is the easily observed Phoebe, simply because it is a common nester on people’s houses or garages, wherever good over-hanging roofs are located.

It’s a happy day when “our” Phoebe has returned and is seen perched on our porch railing, its tail bobbing as usual, watching and waiting for some house fly action. My guess is that its usual first sighting, from late March into early April, may be somewhat later this year. I’ve constructed four nesting shelves, two located beneath the roof-overhang on the garage and two on the north side of our house, that have excellent records of attracting at least one pair of Phoebes for nesting to our place in past years.

There are two birds whose diminutive size always amazes us in that these tiny creatures arrive here often within the grip of late winter storms and survive. Only one bird that nests here is smaller than the two Kinglets, the Ruby-throated Hummingbird that arrives usually during the first week of May.

Surely you are just as anxious as we are for the Earth to green up and birds to arrive for nesting. As for that white stuff – enough already!