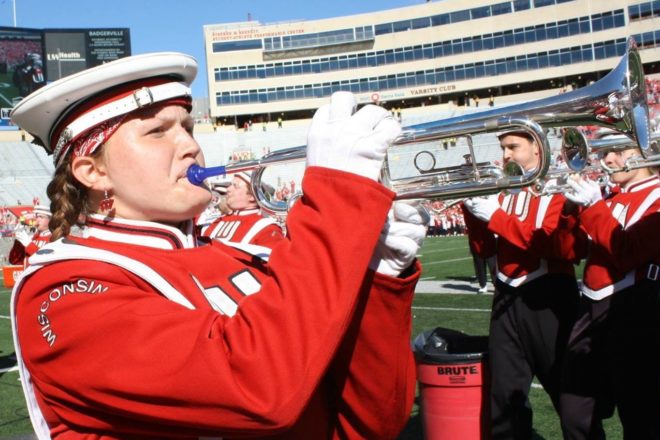 In sixth grade, Madalyn Gray’s mother gave her the option to join the school choir or learn to play her brother’s trumpet. She chose the latter, though her band teacher suggested she switch instruments because he didn’t think she’d be a good player. Now she’s playing in the marching band at the University of Wisconsin — Madison — one of the five best marching bands in the country, according to nfl.com.

Gray, a Baileys Harbor native, is a junior majoring in rehabilitative psychology at UW — Madison. She attended Gibraltar High School, where she participated in band under the direction of Charlie Eckhardt.

When students first try a mouthpiece in sixth grade and it doesn’t work very well, he recommends they try something that comes more naturally. If not, it takes a lot more work to master the instrument. Eckhardt said that Gray’s perseverance to stick with the trumpet anyway landed her the first chair seat in high school, and second chair right away as a freshman, Eckhardt said.

“She was pretty motivated, pretty advanced,” he said.

With that motivation and skill on her side, Gray took a chance at auditioning for the UW Marching Band, hoping she’d find a special community within a school that has nearly 44,000 students.

“Initially walking onto campus and having like 350 of your closest friends is like, here’s my group,” Gray said.

Getting into the band was her “What now, Mr. Eckhardt?” moment, Gray said with a laugh.

And she was selected even under some trying circumstances: Gray had traveled home from Shanghai, where she had been working as a resident counselor at a bilingual school and also visiting her sister; moved into her residence hall; and completed a full day of auditions, all within two days. During her private audition with Mike Leckrone, the band’s longtime director, her exhaustion almost proved to be too much. She momentarily forgot how to play a simple scale, but she was able to regain her footing.

“I’m putting you on as first,” Leckrone decided.

Gray was surprised and argued that she knew she wasn’t that good of a player. Firsts are typically stronger players, and in bigger bands, they also tend to have a higher range. 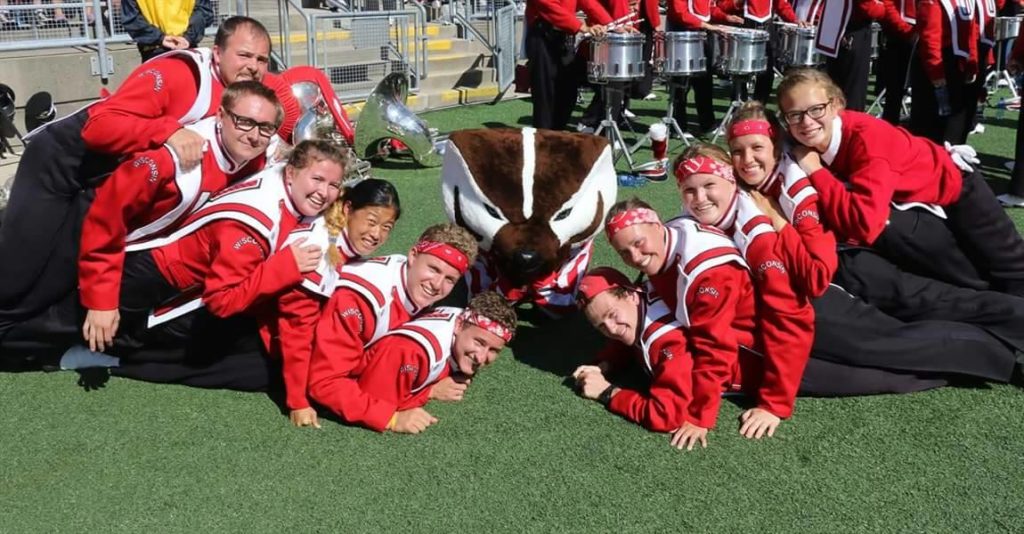 “You have good tone, and you show work ethic,” Leckrone said. “We need good players on all parts, so just because you’re on first doesn’t mean you’re the best trumpet player. But I think you’ll do well, and if I’m wrong, I’m wrong.”

Gray’s hard work getting into the UW Marching Band was just the beginning of the hard work: it’s one of the most time-consuming activities on campus, with multiple rehearsals a week, including Friday and Saturday. These run for hours at a time, and that’s just during the school year. In August, band members return to campus early to start “two-a-days:” two rehearsals every day until school starts.

“Marching band is technically a one-credit class, the most difficult one-credit class you can sign up for,” Gray said. “It should be at least five credits with all the time commitment.”

Being in the band poses additional challenges. Exercising is necessary in order to keep up. There are some quick, complicated steps that band members must execute on the field while somehow still being able to breathe and play their instruments correctly while wearing weighty uniforms and hats. These skills take constant practice, and all band members know they can be better, Gray said.

“Every step is 22 inches apart,” she explained about the precision required. “Your thigh is at a 45-degree angle from the ground. Your knee makes a 90-degree angle. Your toe is directly pointed down, and in between each step is a hesitation.”

It’s like trying to run and jump at the same time, but you need to remain level to play your instrument.

The summer — and even fall — heat in Madison doesn’t make any of this easier when the band members march several times during six hours on football game days. They aren’t promised water for away games either. Gray remembers a game against Louisiana State University in Green Bay when everyone was “sweating buckets” and dehydrated. At least they won that one, she added. 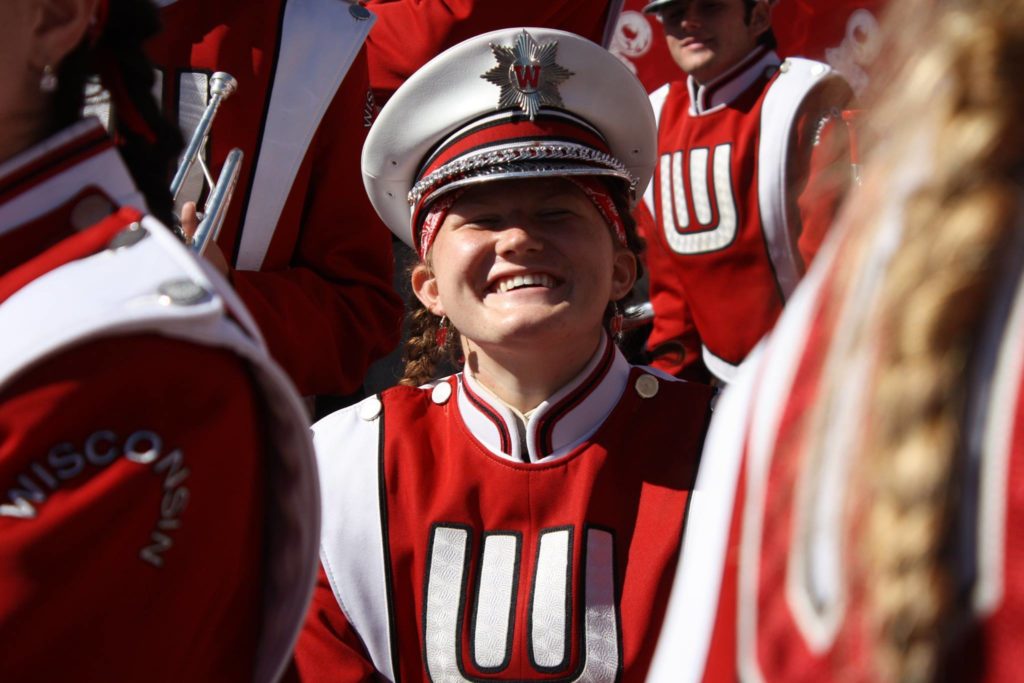 “Wool and heat don’t mix, and we have to be in full uniform at all times,” Gray said.

The cold can also be brutal. The worst weather she’s played in was during her freshman year in a game against Ohio State when rain poured, and everyone was soaked through and freezing.

“The uniform is your best friend during the colder months, but the first few games are pretty awful,” Gray said.

Players are always working hard to prove they deserve their spot, so she’ll have to return to campus in shape to prevail over the sophomores who’d like to take over her position.

It can be quite grueling, and sometimes she wonders why she’s doing it, Gray said, but that’s when she remembers her “moments of happiness,” such as her first knee bow — a classic UW Marching Band move — at Camp Randall and being surrounded by her best friends.