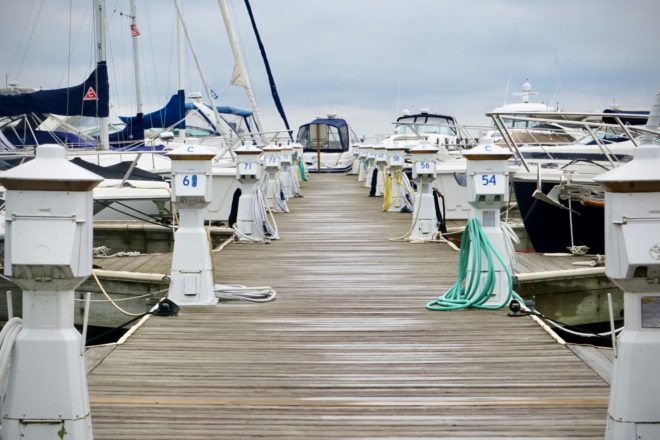 EDITOR’S NOTE: An earlier version of this article included the wrong date for the next meeting of the Sister Bay Marina Committee. It will be held Jan. 11 at 4 pm.

Sister Bay’s boat-rental operators will likely be sticking around for a while after the village’s Marina Committee heard from a roomful of supporters during a Dec. 14 public hearing.

More than a dozen attendees spoke up in support of the opportunities the commercial vendors provide. Several noted that it’s the only way they get on the water each year, and others said it’s a rare activity that family members of all generations can participate in within the village.

Sister Bay/Liberty Grove Fire Chief Chris Hecht noted that the vendors have lent their boats to aid in water emergencies several times over the years, and other boaters noted that their employees have helped boaters get their crafts out of the water when marina staff had finished for the night.

After hearing the feedback, the committee decided to rescind its November decision to offer only one-year contracts to the vendors, then held an hour-long discussion with vendors to find solutions to a number of issues the committee raised.

The committee will meet again Jan. 11, 4 pm, to finalize the details of new contracts and make a recommendation to the village board.

“We looked at it too much as a marina and not enough at what it does for the village and the economy,” said committee member Greg “Fuzzy” Sunstrom, who had voted for the one-year contract. “I think we need to look at it as what’s good for Sister Bay. I sat at Fred and Fuzzy’s, and I would push [the boat rentals], and they would push [our restaurant]. We have to stand back and look at what it’s going to take to solve these problems.”

The committee had caused a stir in November when it considered discontinuing commercial leases at the marina, citing a long list of issues with the vendors, including garbage removal, bathroom use, parking, overcrowding and the cost of services and dock maintenance.

A number of solutions to most of those problems came out of the Dec. 14 discussion. Those included greater diligence in garbage collections, increasing vendor insurance coverage to limit village exposure and running a pump-out line to the commercial piers to enable vendors to do their own pump-outs.

Eric Lundquist, owner of the Nora Door, also suggested that the vendors could direct patrons to the bathrooms at the village hall rather than the marina to reduce the number of pedestrians crossing the boat launch area. Marina manager Dave Lienau said he recently returned from a conference for marina managers at which he learned that many marinas deal with the same issues and had found creative solutions. Some use floating bathrooms, for example, that slide into a marina slip.

Some sticking points remained, however. The committee asked Thor Johnson to present either a new option for fueling the pontoons, boats and Jet Skis that he rents through Sister Bay Boat Rentals, or new safety protocols for fueling. Because there isn’t a gas dock at the commercial pier, Johnson fills large tanks at nearby gas stations to fuel his boats. That practice is legal, but the marina committee would prefer a better solution and has required it in its contracts.

“It’s been an issue since I’ve been on this committee,” said committee member and village trustee Chad Kodanko, “but it’s been touchy because nobody wants to hurt somebody’s business.”

Committee member Pat Duffy was adamant that parking for rental customers be addressed, but other committee members said that’s a larger village issue that’s beyond the scope of the Marina Committee.

“The sentiment I get from people is, ‘Thank God somebody is actually trying to address this,’” Duffy said. “[If] we just continue to ignore it, it’s only going to get worse. We have a 140-slip marina, and 100 are seasonals. They say the benches are full; the grills are full; the bathrooms are full; I can’t find a parking space.”

Duffy repeatedly emphasized that the village has an overtourism problem and that curtailing the number of people using the commercial vendors should be a priority for the marina.

“We also need to understand the impact of the amount of customers we now know are coming through,” Duffy said.

Kodanko said he thought that was a good problem to have.

“Sister Bay has a problem: It got really good at everything,” he said. “The quality of everything went up. The marina attracted these businesses, and that attracted more people and more great businesses. I think we all think there’s a little bit of overtourism going on in the county on some level.”