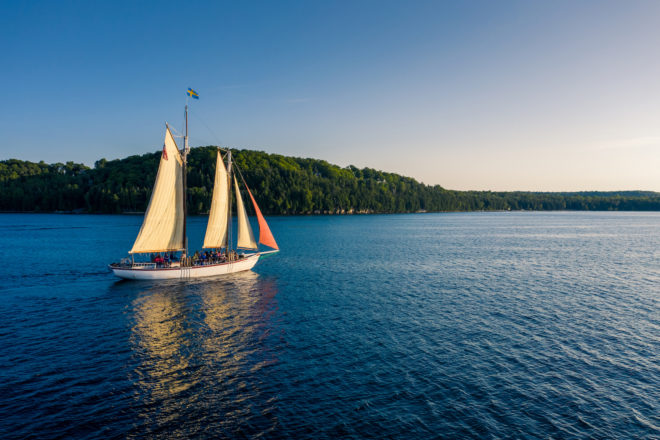 The Edith Becker schooner has offered tours out of the marina since 2011. Photo by Brett Kosmider.

Should water access at the Sister Bay Marina be the exclusive domain of boat owners?

That’s the discussion the village’s Marina Committee had Nov. 16, when it went into closed session to review commercial-vendor contract proposals and emerged to announce that it is considering giving vendors the boot.

“We talked about eliminating commercial rental activity at the marina in one to two years,” said committee chair Scott Baker.

He cited a laundry list of reasons, including dock damage, trash issues, parking and traffic-flow issues that committee members say are caused by customers renting pontoon boats or Jet Skis, or taking tours on the Nora Door boat, the Edith Becker schooner and the Passage North.

The village has received an avalanche of correspondence, and social media was buzzing with backlash to the idea. In response, the committee has scheduled a public listening session for Dec. 14 at the Sister Bay/Liberty Grove fire station at 4 pm.

The operators of the three commercial entities that rent from the marina all said the possibility of eliminating commercial activity was news to them.

Thor Johnson, owner of Sister Bay Boat Rentals, said he was blindsided during the meeting when the committee emerged from closed session after an hour, and committee member Pat Duffy told him about the discussion about eliminating vendor operations.

Johnson said he has more than $200,000 worth of boats on order, and a one-year contract would never be enough to recoup that investment.

“I can’t go out and buy a boat and expect a return on that investment in one year,” he said.

Marina Committee member Greg “Fuzzy” Sunstrom said the discussion came about based on a number of complaints the marina has received.

“You start taking all the expenses it creates and the problems it creates for parking, is it in the best interest of the marina to have the commercial operators there?” Sunstrom asked.

One of those problems is fueling for boat rentals. The marina does not have a gas dock, which means Johnson must fuel his boats by filling tanks at nearby gas stations and carting them to his boats. Baker said that though Johnson’s lease prohibits the practice, the village has allowed it.

At the meeting, Sunstrom and Baker said marina manager Dave Lienau told the committee that repairs to the Edith Becker dock would cost the marina at least $10,000. But Peder Nelson, owner of the Edith Becker, said that was news to him.

“This is the first I’ve heard about damage to my dock,” he said.

Nelson pays $30,000 per year to use three slips at the marina for the Edith Becker, the Passage North and a parasail boat.

“I look at that dock every day,” he said. “They’ve never approached me about any repairs needed for the dock.”

Baker and Sunstrom said the marina is also looking at spending up to $300,000 for a new building for the vendors to check in customers and sell tickets, with additional bathrooms. Committee members said that came at the request of the vendors, but Johnson said that idea did not come from the vendors.

Eric Lundquist, owner of the Nora Door, said he has faith that the committee will “go through the process of negotiating new contracts with open minds to find solutions to any challenges that may exist. I don’t want to be too quick to judge here,” he said. “I’ve never found this committee to be unreasonable.”

Baker said the committee believes that it could make up for the revenue of the commercial vendors by turning their slips into transient slips. The village has budgeted $118,690 in income from commercial vendors in 2023, up from $103,132 in 2022. Village clerk Heidi Teich said Lienau, who could not be reached for comment, told the committee he would report back in December with an estimate of what the marina could pull in from transient boaters.

When the village began buying waterfront property in 2007 to expand its park, one of its early aims was to attract water-activity businesses to the marina to generate the type of commercial activity that Ephraim had.

“I’ve operated the schooner there since 2011,” Nelson said. “Jack Bunda and the Marina Committee asked me to go get it.”

Sunstrom has served on the Marina Committee for 37 years and said the village worked hard to bring commercial activity to the marina. At the time, Sister Bay was struggling, and the marina was seen as a way to turn around village fortunes by becoming a thriving waterfront community.

“No question that was a big part of the waterfront expansion,” Sunstrom said. “Peter Trenchard and I were probably the biggest advocates for that. We did it to get people to Sister Bay because Sister Bay was kind of a dying community.”

It seems to have worked. According to data provided by the three vendors to the village in the RFP process, the businesses now combine to serve more than 50,000 locals and visitors each year.

But Baker, Sunstrom and other committee members said that effort has worked so well that the committee has changed its tune. Sunstrom said part of it is that “Sister Bay is overpopulated right now.”

Nelson said that’s a hard argument to hear after village officials prodded him and others to establish their businesses at the marina years ago.

“We are a huge part of the economic engine that was a model for success and revitalizing Sister Bay,” Nelson said. “When you don’t put gas in the car, it stops. They’re turning off the fuel here.”

Johnson noted that the business the watercraft operators bring in isn’t just about boat-rental income.

“It’s a lot of people who buy things in the village before they get on the boat and after they get off,” Johnson said.

Any change to current operations would go to the board of trustees for a final decision.