The Liberty Grove Town Board voted to move forward with a study on whether to build a new marina in Gills Rock May 6, despite vocal opposition from many of the 61 citizens in attendance. 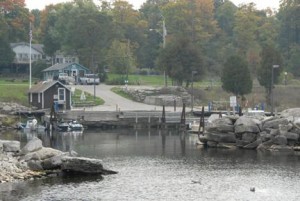 The Gills Rock shoreline will look much different if the Town of Liberty Grove moves ahead with a 98-slip marina plan.

The evening’s seminal debate was whether the town should go ahead with land appraisals in the amount of $3,500 per parcel for seven parcels, a total of $24,500. The appraisals will be necessary if the town wants to apply for grant funding from the Department of Natural Resources. However, those grants can’t be sought until after a plan is approved, and many in the audience said it was putting the cart before the horse to get the appraisals now.

Mary Kay Shumway, a real estate agent who lives in Liberty Grove, said the appraisal price seemed high. Town Clerk Bud Kalms said the price is high because there are no appraisers certified by the DNR in Door County.

Shumway suggested the town use a local appraiser or real estate agent to give a ballpark, working estimate for the town to use as they discuss whether to pursue purchasing the land.

Ultimately, the board decided to pay for the appraisals and complete Phase 1 of planning, which includes a financial analysis. Bill Tidball was the lone supervisor to vote against the appraisals. The town has spent about $200,000 on the project to date. 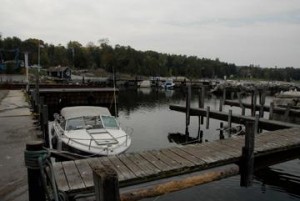 Geoff Gialdini, chairman of the Gills Rock Harbor of Refuge Steering Committee, said the project has grown to nearly 100 slips because a smaller marina would likely not pay for itself. But Mike Kahr, who was one of the originators of the idea to buy the properties, said he hasn’t seen any numbers that show that.

“That wasn’t what I had in mind,” said Kahr, who own’s Death’s Door Marine and does marina construction. “I was thinking along the lines of 40 – 50 slips, maybe with room for expansion. There’s nothing wrong with looking at a bigger marina, but it’s got to be full and within the character of the area.”

Kahr said the best way to examine it would be to put both options on a piece of paper and show it to the taxpayer.

“It’s foolish to hang your hat on one design,” he said.

JJR Engineers, hired by the town to produce the marina design, came up with its revenue estimates by using Sister Bay’s 100-slip marina and Egg Harbor’s 30-slip marina as comparisons, but neither of those marina’s currently offer the amenities the Gills Rock plan would include, including gas, showers, and a deep water harbor.

Revenue estimates were based on charging $100 per linear foot on slips. Egg Harbor currently charges about $97 per linear foot, but would raise that to $110 if a referendum to build a new marina passes May 26. With slip revenue, plus gas and storage revenue, Bill Patek, JJR Vice President, said the marina carries a supportable debt of $3.441 million at 100 percent occupancy.

Susie Watson seriously questioned JJR’s estimates, particularly for revenue. JJR’s estimates include $40,000 per year for outdoor storage of large boats. Watson questioned whether someone with a 40-foot boat would pay more to store it outside for the winter than they would have to pay to store it inside elsewhere.

Questions were also raised about whether 100 percent occupancy of the marina was realistic. JJR included estimates based on 90 percent and 80 percent occupancy, but the steering committee and Patek pointed to long waiting lists at other area marinas as evidence that filling slips will not be a problem.

Patek said he has not seen any surveys or studies of how high gas prices or the struggling economy will affect boating and marina use in the years ahead. He said he doesn’t expect to see significant impact.

Watson pleaded for more detail than the generic outline JJR provided to back up its $10.5 million construction cost estimate, but Patek said it was too early to get more specific.

Citizens say they want to preserve the historic buildings on the property, but some are skeptical about a large marina project.

“That’s an engineer’s estimate,” Patek said. “Until you get an actual bid, we can’t get you what’s included in that number.”

Town Treasurer Janet Johnson said the slip makeup is based on the waiting list.

Asked later why the same engineering firm proposed projects of such different scales in Gills Rock and Egg Harbor, Lowry said, “My guess is they’re dealing with different clientele in Egg Harbor.”

Schwarz called the list “flawed,” saying many of those on the list don’t even own a boat, and wondered whether every name on the list would still be there when the marina is built.

Many who criticized the marina project expressed some support for looking into a much smaller project. Kubet Luchterland told the board he hoped it would not come down to a “take-it-or-leave-it” vote. Lowry said that won’t be the case.

“I hope that’s not what we’re going to come to,” he said. “When it comes to the town, I expect there will be a number of options available.”

Those options, Lowry said, could include the current consensus plan, doing nothing, and maybe purchasing fewer properties to create a park.

“It’s a very unique situation to have all these properties available,” Gialdini said and urged the town to take advantage of the opportunity to do something on the shore, even if its not the marina currently proposed.

He proposed a listening session for June or July in which all residents would be encouraged to approach the board and express their views. Lowry said he suspects there are many views not being voiced.

After the meeting, an exasperated Patek tried to clarify JJR’s role.

“We would just like to see the town decide what they want to do,” he said. “Whether it’s a large marina, or a small park, or something else. We have no incentive to just come up here and get nowhere or do something the town doesn’t want.”