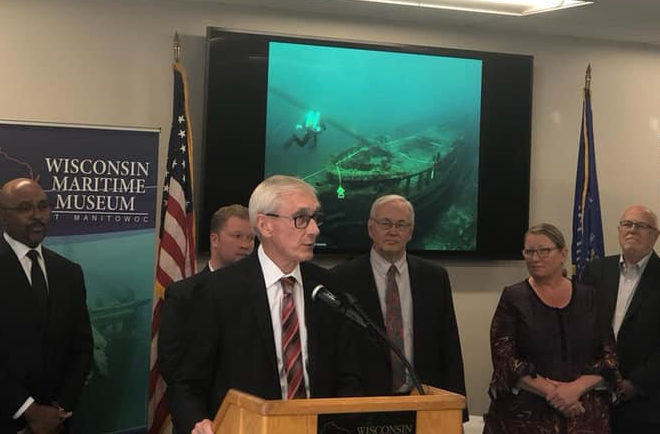 Gov. Tony Evers – joined by U.S. Senator Tammy Baldwin, Wisconsin Department of Natural Resources Secretary Preston Cole, and local officials – visited the Wisconsin Maritime Museum to express support for the Wisconsin-Lake Michigan National Marine Sanctuary designation process. The sanctuary would be the second of its kind in the country, and it would protect, conserve and enhance public access to a significant number of historic shipwrecks in Lake Michigan within Wisconsin state boundaries. Submitted.

Kewaunee County is included in the new designation effort

Former Gov. Scott Walker cited concerns about state’s rights and federal overreach when he withdrew the state from consideration of the proposed Wisconsin-Lake Michigan National Marine Sanctuary in February 2018, four years after the designation effort began.

But now the designation is back on track, with the inclusion of Kewaunee County as one of four lakeshore counties to be granted the designation. Sanctuary status is granted to preserve and promote history through shipwrecks.

Gov. Tony Evers and U.S. Sen. Tammy Baldwin have made a concerted effort to show the state’s renewed interest in the designation.

On Nov. 1, Evers sent a letter to Neil Jacobs – acting undersecretary of commerce for oceans and atmosphere at the National Oceanic and Atmospheric Administration (NOAA), the agency responsible for making the designation – stating that Wisconsin’s renewed interest in pursuing the designation is intended to “build on decades of investment by the citizens of Wisconsin to preserve and promote our state’s maritime heritage, natural resources and tradition of excellence in research and education.”

Baldwin has supported the idea from the beginning of her time representing Wisconsin in the U.S. Senate, and as a member of the Senate Appropriations Committee, she has pushed for federal funding to ensure NOAA has the resources to support the development of a marine sanctuary in Wisconsin.

When the idea was first presented to the public in a packed-house NOAA presentation in Algoma in March 2017, two options were presented. Option A included 1,075 square miles of Lake Michigan off Manitowoc, Ozaukee and Sheboygan counties, with 37 known shipwrecks and a total of 80 potential shipwrecks.

Option B, which was highly favored at the public meeting, included Kewaunee County for 1,260 square miles, with 38 known shipwrecks off its shores and the potential for a total of 95 shipwrecks.

Option C, never mentioned, but discussed at the March 2017 meeting, was at some point to include Door County, with more shipwrecks than the other four counties combined (more than 200).

In making the announcement at a Nov. 1 event at the Wisconsin Maritime Museum in Manitowoc that the state is pursuing the marine-sanctuary designation with Kewaunee County included, Evers said, “It will provide educational benefits to families across the state and is projected to attract thousands of additional tourists each year, boosting tourism and economic growth in our beautiful coastal settings.”

“I think it is exciting,” he said. “The only other U.S. marine sanctuary is on Lake Huron, near Alpena, Michigan [the Thunder Bay National Marine Sanctuary]. It’s a real success story. It started 17 years ago, and they have expanded it. I talked to people up there involved with it, and they invited us up. They have been very positive about the impact of the marine sanctuary.”

The Thunder Bay Sanctuary, in a treacherous stretch of northwestern Lake Huron, was first recognized by the state of Michigan in 1981 as a 290-square-mile underwater nature preserve. Since being designated a national sanctuary in 2000, it has grown to include 4,300 square miles, with more than 200 sunken vessels, from an 1844 sidewheel steamer to a 500-foot 20th-century German freighter.

Luft said it was a combination of local support in the four counties, a new perspective from the Evers administration and Baldwin’s continued support that has put the sanctuary back in the spotlight.

“Between the actions of citizen groups and governmental agencies at all levels, there was a lot of support for this,” he said.

The next step is for the proposal to be finalized and sent to Congress for approval.

“We’ve got a ways to go here,” Luft said, “but what’s happened within the past week and a half is very encouraging.”