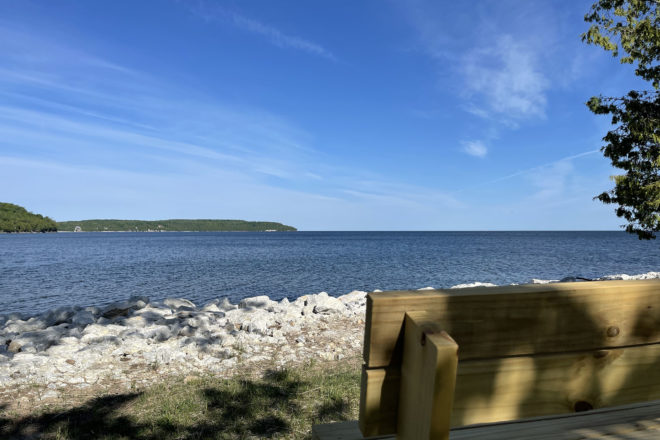 Aside from a few benches and new riprap along the shoreline, there have been few noticeable improvements to Mariner’s Park since the town bought it in 2018. File photo from 2021 by Myles Dannhausen Jr.

The slow pace of development at Mariner’s Park in Gills Rock won’t pick up anytime soon.

When the town purchased three parcels on the Gills Rock shoreline in October of 2018 for $1.45 million, it did not anticipate making major changes immediately because the purchase agreement stipulated that former owner Betty Weborg could continue to live on the property for more than a year. The town did not appropriate any additional funds for improvements to the park at the time.

Once the home was vacated, the town put it out to bid to see whether anyone was interested in moving it off the property. Stefanie Burke submitted the only bid, for $1,000. The town stipulated the home be moved by the end of 2021, but Burke said the town did not complete several steps that were necessary for her to move the home until early January. Those included disconnecting electricity and switching over a pressure tank to the neighboring Weborg Fishery property.

The town has now extended the deadline to move the home to May 1, and Burke said she has begun preparing the home for moving, likely in two pieces.

But more than three years after voters overwhelmingly approved the purchase of the property, Steve Eatough said he is frustrated by the slow pace of development. Eatough and Mike Bahrke presented a concept plan for the park to the town in 2019.

“The people have gotten no use of the park because they don’t even know it exists,” Eatough said in January. “There is no sign; there is no plan; there is no money allotted for it.”

Eatough said he understood that the purchase did not include any allocation of funds for the development of the park, but he criticized the town for finding money for other projects while the park languishes. “While they don’t have any money, a five-acre parcel of property comes up adjacent to the town hall for $40,000, and they magically came up with $40,000 to buy that,” Eatough said.

Town Chair John Lowry said the property near the town hall was part of longer-term conversations the town has had about finding property for potential workforce housing. The town has budgeted $40,000 for Mariner’s Park in 2022.

Cathy Ward, chair of the Parks and Property Committee, said the town hesitated to erect signage while Weborg continued to live on the property and before the town continued to evaluate three other old buildings on the parcel. The town has made some improvements to the park, installing new riprap in 2020 at a cost of $106,000 to protect the shoreline and adding some park benches.

“It’s not going as quickly as Mr. Eatough’s group would like, but we are making progress,” Ward said.

Ward said the Parks and Properties Committee must also balance the desires for Mariner’s Park against the needs of the town’s 10 other public parks. Eatough said he believes people would donate funds to accelerate improvements to the park, but Ward said when town board member Nancy Goss offered to file the paperwork to set up a nonprofit that could accept donations for the park, she had no takers.

During a meeting of the town’s Parks and Properties Committee Feb. 8, Cheryl Culver expressed concern about the stability of the Klenke Garage, the often-photographed building that once housed Gust Klenke’s service station at the corner of Highway 42 and Garrett Bay Road. The town has owned the garage since 2019.

Culver – a member of the committee as well as the Liberty Grove Historical Society – said she’s concerned about the stability of the garage and its general upkeep. She said it’s in need of paint, stabilizing to make it safe, and maintenance of the surrounding shrubs and grounds.

One of the historical society’s first major projects after it was formed in 1999 was to raise funds for a new roof, paint and siding for the building, but little has been done since. In 2019, the town board voted to allow the historical society to temporarily remove and store documents from the garage to protect them.

Committee member Christine Bridenhagen said the town needs to get clarity on the future of the property that many consider a town landmark.

“I think the town needs to determine what its goals are for this piece of property,” she said. “If the historical society isn’t – or anyone else isn’t – interested in taking care of it, then the town has to determine what it wants to do with it. What do people really want to do to invest in this itty-bitty piece of property that does not have parking?”