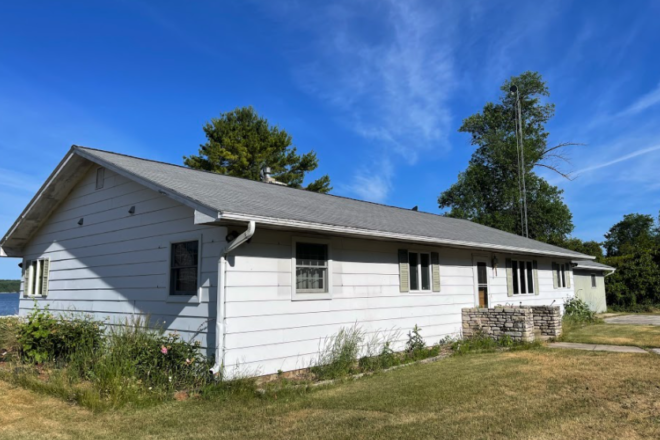 The town is accepting bids for the single-family home on the former Weborg property through July 6. Photo by Myles Dannhausen Jr.

A vision for Mariner’s Park is taking shape in Gills Rock.

An ad hoc committee has been formulating improvement ideas for the new park, which was created when the Town of Liberty Grove purchased three shoreline parcels in 2018. Work on the property has been limited because the purchase included a stipulation that Betty Weborg be allowed to live in her home on the property while she completed work on a new home. Then the COVID-19 pandemic further slowed progress.

The ad hoc committee made a formal recommendation to the Liberty Grove Parks and Properties Committee on June 8.

The plan also calls for installing picnic tables, benches and grills, to be funded through donations.

The recommendation for a phased approach to make limited improvements would be completed over four years at an estimated cost of $459,000. These improvements include protecting the shoreline, adding a temporary parking area, selling and moving the Weborg home, installing porta-johns and removing three old structures on the property.

The park is accessible to the public now, but activities are limited. There are a few benches and a picnic table along the shoreline, and new stone revetments have been installed.

When the town purchased the property, Chair John Lowry said there was not substantial funding budgeted for further improvements.

The primary disagreement the parks committee had with the ad hoc committee’s recommendations revolved around swimming access. Cathy Ward said boaters are concerned about people swimming in the area because of traffic from fishing boats and pleasure boats. But parks committee member Christine Bridenhagen said it’s common to have boat traffic near swimming areas without problems.

“We spent a lot of money on this property,” she said. “They need to be able to get their picnic, get sweaty and get in the water.”

Swimming access could include an opening or steps through the riprap along the shore and buoys to delineate the swim area.

Town voters approved the purchase of the property, which includes 440 feet of shoreline, in October 2018 at a price of $1.45 million. The town held multiple listening sessions with stakeholders and distributed a survey to town residents to gather ideas for the property that garnered 644 responses.

The survey identified the preservation of fishing and maritime history, silent-sports access, a pavilion, a safe harbor and launch ramp, repurposed docks for public use, and green space as the top desires.  Some of those ideas have been incorporated into the plan, but others have been put on the back burner. Ward said the committee did not make a kayak launch a priority because the Garrett Bay boat launch – a short drive down the bay – serves that purpose.