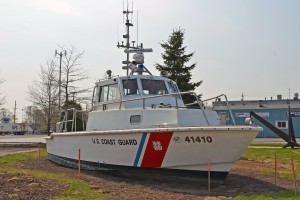 The newest vessel acquired on permanent loan by the Sturgeon Bay Maritime Museum is the Coast Guard utility boat CG-41410 – the 110th of the 207 41-foot crafts built between 1973 and 1978. Faster and more rugged and seaworthy than the 40-foot utility boats they replaced, the 41-footers were credited with saving thousands of lives and millions of dollars in property. They were located at multiple Coast Guard stations on the Great Lakes for 41 years.

CG-41410 was the last of its kind to be in service. It was retired in ceremonies held during the Coast Guard Grand Haven Festival last summer. It went into service on July 1, 1977, in Milwaukee and served at a number of Lake Michigan stations, including twice at the Sturgeon Bay Canal Station – from April 26, 2002, to Aug. 15, 2003, and from June 12 to Aug. 6, 2007. It was last located in Muskegon, Mich.

CG-41410 arrived at the Maritime Museum aboard a Coast Guard barge, being pushed by the Sturgeon Bay-based USCG cutter Mobile Bay from the Milwaukee Coast Guard Station. A crew from Bay Shipbuilding lifted the boat into its final resting place along Madison Avenue, where its exterior is being readied to be open to the public.

Amy Paul, marketing and communication manager at the Maritime Museum, said the Coast Guard is planning to have CG-41410 open for interior tours during the Plastic and Wooden Boat Fest on Aug. 8.

The 41-foot boats are being replaced by 170 faster, self-righting 45-foot response boats. While the smaller vessels were primarily used for search and rescue, the mission expanded to include boating safety, marine environmental protection, enforcement of laws and treaties, security of ports, waterways and coasts and defense operations, including missions associated with homeland security.

Of local interest is the fact that Paul’s husband, who works at Ace Marine in Green Bay, helped to build the 45-foot response boat that went to Muskegon to replace CG-41410.